How To Deeply Perform Arati 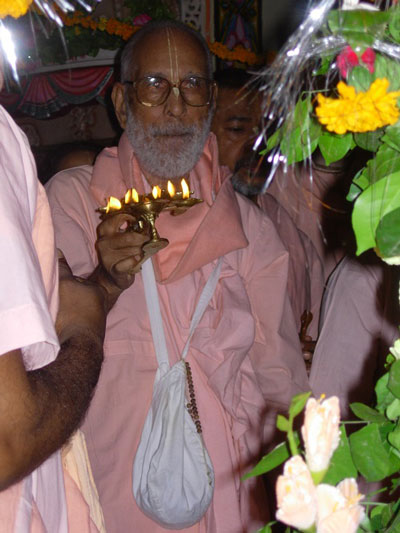 You will have to add something in your sadhana-bhajana. Try to follow the instructions given in the book Hari-bhakti-vilasa, for all rules and regulations can be found there. Also, for arcana (formal deity worship), there is a book coming from Sri Caitanya Mahaprabhu through Sri Vakresvara Pandita and Sri Gopala-guru Gosvami, and after that through Gopala-guru Gosvami's disciple Sri Dhyanacandra Gosvami. This book is called Arcana Padhati.

This is required; it does not take a very long time, and I see that you used to spend over an hour in doing arati. You can adjust, if you like, and those who follow me should certainly do so.

Do you remember the kirtana: "Jaya jaya radha-krsna yugala milana"? Radha and Krsna are the divine couple there. "Arati koroye lalitadi sakhi-gana" You should see who is doing arati – it is Srimati Lalita-devi. Lalita-devi is performing the arati; Srimati Visakha-devi is behind her, waving a camara and also performing kirtana along with all the sakhis. Tungavidya is playing mrdanga, Citra or someone else is playing karatalas, someone is playing a vina, and thousands of very beautiful sakhis are standing there.

Tungavidya, Citra, and all the other sakhis are expert in their singing and playing the many instruments. What are they singing?

["All glories, all glories to the amorous rendezvous of Sri Radha and Krsna! All sakhis led by Lalita and her group perform arati for Their pleasure." (Sri Yugala-Arati verse 1)]

["In His beautiful three-fold bending madana-mohana form, He is so attractive, even to cupid. With His yellow silk dhoti and crown decorated with peacock feathers, He captivates the minds of all." (verse 2) ]

Lord Sri Krsna is standing in ''tri-bhanga sundara." He is bending in three places and He looks very beautiful with His flute, peacock feather, and vana-mala (garland of forest flowers), and He is affectionately looking towards Srimati Radhika and smiling. "Madana-mohana." If anyone sees Him – even if Kamadeva will see him – he will be charmed. "Pitambara." We should try to give a pitambara (yellow chadder or shawl) to the Deity of Krsna.

["To the left of the amorous and charming Sri Madhava is the beautiful daughter of King Vrsabhanu, Srimati Radhika, dressed in a sari the color of a blue lotus. Her complexion is the color of molten gold and Her beauty and qualities are matchless." (verse 3)]

By singing this song, many thoughts and moods will come, and you will feel as if you are seeing Them – along with Lalita who is performing Their arati.

Why is Srimati Radhika addressed as Vrsabhanu-kanya? Why not Kirtika-kanya? This is because She is especially beloved to Her father, so much more than to Her mother. She did not come from the womb of Kirtika; rather She was floating on a lotus flower in theYamuna. She appears in different ways and different places in different kalpas (milleniums). In a different kalpa She appeared from Kirtika-devi's womb, but in any case Her father loves Her more than Her mother. As far as Sri Krsna is concerned, Mother Yasoda is more loving to Krsna than Nanda Baba. Nanda Baba also loves Him, but Yasoda loves Him so much more. With Srimati Radhika, on the other hand, it is somewhat opposite.

"Nila-vasana" means that Radhika has taken the color of Madana-mohana Krsna and has dressed Herself with that color.

["She is adorned with various sparkling, shimmering ornaments (alankaras), enchanting the mind of Hari with Her radiant face." (verse 4)]

She wears many varieties of ornaments, and She has been decorated by Krsna Himself. Lalita tells Krsna, "Oh, you don't know how to decorate Her!" and she lightly pushes Him away with her elbow. Krsna then says, "You don't know; I know more." They are quarreling, and Srimati is laughing.

"Hari-mano-vimohana." Srimati Radhika has such a mood and personality that Krsna gives His heart to Her. She takes His heart.

["Visakha leads all the sakhis in singing various ragas (melodious songs according to the appropriate time of day), as all the other priya-narma-sahkis soothe Sri Radha and Krsna with camara fans." (verse 5)]

Those who are singing and performing kirtana are Visakha, Citra, Champakalata, Rupa Manjari, Lavanga Manjari, Ananga Manjari, and so many others, with many various kinds of melodies.

Who are the priya-narma sakhis? Lalita, Visakha, after that Champakalata, and after that Citra, Tungavidya, and there are so many others. They are very beautifully, and humbly, waving their chamaras. Their postures are so marvelous that Krsna wants them to wave the camaras before Him.

["At the feet of the damsels of Vraja-dhama lies an ocean of joy. There Bhaktivinoda Thakura swims, hoping to attain the lotus feet of Sri Radhika and Madhava." (verse 6)]

Srila Bhaktivinoda Thakura is singing this arati kirtana of Radha and Krsna, and he is praying, "sri radha-madhava-pada-sarasija ase." Sarasija means lotus. Radha and Madhava's feet are like lotuses, and he wants to serve their lotus-like feet. While arati is going on we can add these ideas – to improve our Krsna Consciousness.

If you are worshiping Radha and Krsna and performing Their arati, and at that time if you sing the song of Narahari-rupa Lord Nrsimhadeva, "kesava dhrta-narahari-rupa jaya jagadisa hare," what will be the use? Narahari cannot go to Vrndavana. Parama-pujapada Srila Bhaktivedanta Swami Maharaja gave this mantra at first, before he had given the diksa-mantras of Radha and Krsna. He told his young disciples to do this, because he was thinking, "Somehow they should begin their worship." This is called 'gathering devotees.' It is for common persons, to gradually bring them to bhakti.

Those who are beginners should do this, but those who want to advance further should worship separately. Let it be done as it is going on in any temple, but you, your wife, your children and some rare devotees should try to follow these other principles. You will then see that everything is going on well.