Is Gurudeva His Institution? 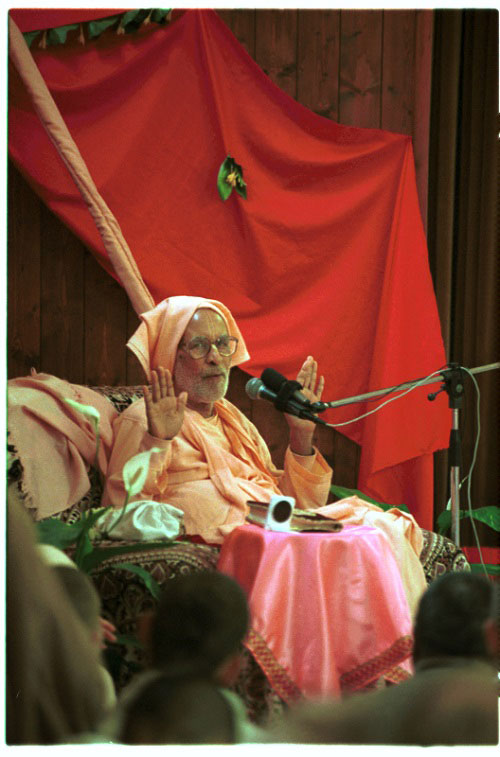 Sri Srimad Bhaktivedanta Narayana Gosvami Maharaja
[Part 1 of a discourse given in Eugene, Oregon, on July 8, 1996]

I'm thinking that we are in ista-gosthi. We are all are devotees here; we are all friends, and we are expressing our ideas to each other. In this ista-gosthi, first I want to say that after the disappearance of Srila Prabhupada Bhaktisiddhanta Sarasvati Gosvami, many of the senior Vaisnavas, and especially those who were sincere and very beloved to Srila Prabhupada, left his mission . They came out of that mission, but they never left their Gurudeva or his teachings, or anything associated with Krsna consciousness.

It was actually the accusers themselves who had abandoned Krsna consciousness, and they even left Srila Bhaktisiddhanta Sarasvati Gosvami. So, don't think that. Let those who are barking like this bark. Pure disciples never abandon their Gurudeva. They never relinquish the service of Vaisnavas. They never leave the teachings of their Gurudeva. They never disavow Caitanya Mahaprabhu, Nityananda Prabhu, and all the Vaisnavas, like Rupa Gosvami, Sanatana Gosvami, and Raghunatha dasa Gosvami. They never stop serving the Divine Couple, Sri Sri Radha-Krsna.

They may give up one place and go to another place – they may change their place – but they will always have regard for the place where their Gurudeva has left his foot-dust.

So you should never think it is a problem if you are in a different place. Take it as the blessings of your Gurudeva that you are now fully absorbed in chanting and serving him and the Divine Couple Radha-Krsna, as well as Caitanya Mahaprabhu – Gaura-Nityananda Prabhu. They are giving this chance. We see that Narada Rsi and Vyasadeva were not together all the time, but their hearts were together. Sukadeva Gosvami went here and there. We see that Rupa Gosvami, Sanatana Gosvami, and Raghunatha dasa were not always in one place together.

Then, after the time of Srila Bhaktisiddhanta Sarasvati, many of his followers went here and there, but they maintained their great regard for Caitanya Mahaprabhu's birthplace and for their Gurudeva. And some of those who remained living in their matha went to hell. I know them; you may also know who they are.

So you need not think that these are problems. There is only one problem: We do not feel the pangs of separation for Radha-Krsna, Caitanya Mahaprabhu, and our Gurudeva; this is the only problem. Otherwise, there is no problem at all.

Krsna sometimes arranges circumstances like this for the sincere Vaisnavas, though we may think that it is a problem. Actually, it is not a problem. Rather, Krsna has managed to inspire us to develop our Krsna consciousness. We were with all the disciples of Srila Bhaktisiddhanta Sarasvati Gosvami Thakura. We are so fortunate to have learned all these truths.

Maharaja (who spoke before Srila Gurudeva) just said something that was very good. He said that Vaisnavas are more bona fide than sastra and guru. But this is true in one sense only – not in every case. Krsna is Himself the Veda, Upanisad, Sastra, and Srimad-Bhagavatam.

[I worship the Srimad-Bhagavatam which is the auspicious sound incarnation of Sri Krsna, the abode of mercy and the origin of all demigods, whose transcendental form is black like the tamala tree. He has appeared in the beautiful form of this Bhagavatam just to make a bridge whereby materially conditioned souls can cross the otherwise insurmountable ocean of repeated birth and death.]

Vaisnavas cannot be like the Srimad-Bhagavatam. Srimad-Bhagavatam is Krsna's heart. Sometimes there is confusion about who is actually a Vaisnava and who is not. But sastra cannot cheat us at any time, because He is Krsna and has emanated from the mouth of Krsna, or from the breathing of Krsna. If there is any doubt about guru or Vaisnavas, we will have to consult sastra. That is why Caitanya Mahaprabhu told to Raya Ramananda, "Whatever You speak, speak with examples from sastra. Then I will consider that what you are speaking is bona fide; otherwise I will dismiss what you say."

Sri Caitanya Mahaprabhu used to recite slokas of Srimad-Bhagavatam, such as:

[Syamasundara entered the forest of Vrnda-devi, accompanied by His cowherd boyfriends. His head was decorated with a peacock feather; He wore yellow karnikara flowers over His ears, and a dazzling golden-yellow garment on His body. A fragrant vaijayanti garland made of five kinds of flowers hung around His neck and extended down to His knees. He was splendidly attired as an expert dancer, and He appeared just like a very fine actor on stage. He poured the nectar of His lips through the holes of His flute, and the cowherd boys followed behind Him, singing His glories. Sri Krsna made the land of Vrndavana even more charming than Vaikuntha, for He beautified it with prints of His lotus feet, which were marked with the conch, disk, and other symbols.]

Mahaprabhu would sometimes not be able to recite the entire sloka. He only started, and then became ecstatic and would call out, "Radhe Radhe, Krsna Krsna Krsna!" Then Gadadhara Prabhu would come and help Him.

There are so many slokas, such as:

[How astonishing! When Putana, the wicked sister of Bakasura, tried to kill child Krsna by offering Him deadly poison on her breast, He gave her the position of His nursemaid. Could I ever have as merciful a shelter as that of Lord Krsna?]

Sastra has no bhrama (tendency to commit mistakes), pramada (tendency to be illusioned), vipralipsa (cheating propensity), or karanapatava (imperfect senses); but a sadhu may do all these things. From the kanistha-adhikari to uttama maha-bhagavatas like Sukadeva Gosvami and Narada Gosvami, all are Vaisnavas, but we will have to recognize who is who. How? If they are following Srimad-Bhagavatam, then they are true sadhu and guru, otherwise not. By following sastra, they have become sadhu. Otherwise they are not sadhu, not Vaisnavas – not actual Vaisnavas.

[Suta Gosvami said: All different varieties of atmaramas (those who take pleasure in the atma, or spirit soul), especially those established on the path of self-realization, though freed from all kinds of material bondage, desire to render unalloyed devotional service unto the Personality of Godhead. This means that the Lord possesses transcendental qualities and therefore can attract everyone, including liberated souls.]

At first, Sukadeva Gosvami was a brahma-jnani, and he went to the jungle . But later, when he returned and heard the entire Srimad-Bhagavatam, then he became a rasika Vaisnava. And then he declared:

[O expert and thoughtful men, relish Srimad-Bhagavatam, the mature fruit of the desire tree of Vedic literature. It emanated from the lips of Sri Sukadeva Gosvami. Therefore this fruit has become even more tasteful, although its nectarean juice was already relishable for all, including liberated souls.]

What is that Bhagavatam? It is rasamalayam, the endless ocean of rasa. If a person does not follow the Srimad-Bhagavatam, he is not a sadhu.

So, vidya bhagavata vadhih – Bhagavatam is the limit of education. If one understands Bhagavatam, he's finished his education.

It is true that Vaisnavas have said that Krsna and Yogamaya both came from the womb of Yasoda. But you should know that not only are these the words of Vaisnavas, this is stated in the Srimad-Bhagavatam and also in the Hari-vamsa-Purana, written by Srila Vyasa – that Krsna came from the womb of Yasoda. It has been clearly written there. It is not only that Visvanatha Cakravarti ?hakura and Srila Sanatana Gosvami and Srila Jiva Gosvami have explained this. Rather, their explanations are on the basis of the authority of bona fide sastra. Jiva Gosvami has presented all these topics in the first Sandarbha – Tattva-sandarbha – and Srila Baladeva Vidyabhusana has presented these topics in his Siddhanti-darpana. We should know and honor all these truths.

At the same time, without bhakta-bhagavata (the bona fide guru and Vaisnavas), we cannot know the Srimad-Bhagavatam; the key is in their hands. We should always honor them, not less than Krsna, but more than Krsna. We first do arcana of Gurudeva and then Radha-Krsna:

[All the confidential truths described in this Upanisadas will be revealed to that great soul who has the same exclusive, uninterrupted, transcendental devotion for his guru that he has for Bhagavan.]

Actually, guru should be honored more than Krsna Himself, because guru has taken us to the lotus feet of Krsna. He has given the relationship with Krsna, otherwise we could not have it. First worship Gurudeva, and then the Deities. Also in asta-kaliya-lila; first Gurudeva, then Caitanya Mahaprabhu, and then come to Krsna and Radha. This is the process.

We are indebted to Vaisnavas, because they have taken us to gurudeva. Otherwise we could not have realized who is guru and who is not guru. We are indeed indebted to the Vaisnavas, and gurudeva is also a Vaisnava. If a gurudeva is not honoring Vaisnavas, then he is not a bona fide guru – he should not be taken as a guru.

Still, they are siksa-gurus for us; we should not consider who is inferior and who is superior among them. Truly, Krsna is our gurudeva, or Caitanya Mahaprabhu, and He is inspiring us. He is caitya-guru. He is not inferior to our diksa-guru.

Certainly we are indebted to all Vaisnavas, because they have given us all these truths. We should honor Vaisnavas, Gurudeva, siksa-guru, diksa-guru, Sri Caitanya Mahaprabhu, Nityananda Prabhu, all His associates, and also Radha and Krsna with all Their associates.

*Transcribed and edited by the Bhaktabandhav Team.