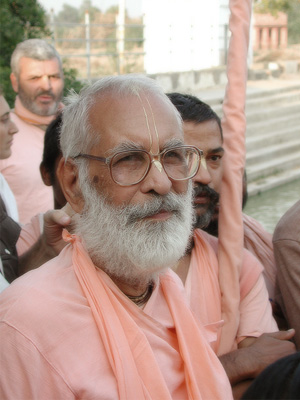 Sri Caitanya Mahaprabhu ordered Sri Nityananda Prabhu to preach His mission: "You should go door to door with Srila Haridas Thakura and beg some alms. You should say, "I want you to put something in My bag. Chant one time Krishna, Krishna." From here He began.

Especially Nityananda Prabhu never went to wealthy persons, nor to very beautiful persons, nor to very learned persons; never. He went to very general, common persons-even to those who were fallen. In India, the brahmanas and ksatriyas, do not even take water touched by such fallen persons; but Nityananda Prabhu preached amongst them. You know Jagai and Madhai. Sri Nityananda Prabhu thought,"They are very good persons to preach to." He went from village to village, and He preached amongst those who were fallen. He preached everywhere.

I know that Sri Bhaktivedanta Svami Maharaja, my siksa guru, also did like this. He never went to those who lived in palatial buildings, to very wealthy persons, nor did he go to any king, or minister. He first went to hippies. These hippies were very attracted to him, and he made them happy. Gradually, from there he started his mission, by chanting under a tree in Thompkins square park: Sri Krishna-Caitanya, Prabhu Nityananda, Sri Advaita, Gadadhara, Srivasadi, Sri Gaura bhakta Vrnda. Hare Krishna Hare Krishna, Krishna Krishna Hare Hare, Hare Rama Hare Rama, Rama Rama Hare Hare. [All the devotees chanted the maha-mantra with Srila Narayana Maharaja one time, in the same tune that Srila Prabhupada chanted in Thompkins Park]. He never saw who was following him or not, nor did he see who was sitting there or not. Only his karatalas were there. His eyes were closed and he was chanting, [referring to the melody they had just sang] absorbed in that pathetic tune. And sometimes the hippies would dance, taking wine and other things. They would say to him, "Oh my friend, you should take wine."

Thus he preached, and so many came and became happy. Young, very beautiful, energetic persons came. Ladies also came, like Jadurani and Vrindavana Vilasini, and all of them became happy. This was the very beginning, and very soon Srila Svami Maharaja made many preaching centers and established book distribution. He also made so many editions of his magazine. His one magazine, (BTG), became very popular all over the world. He translated so many books, and gradually they were also distributed all over the world. At that time there were very beautiful young ladies. They used to go here and there, to airports, to markets, and everywhere. They knew no shyness. They gave up all these things for preaching, and that is why you are now seeing devotees all over the world. At that time most of the senior Vaisnavas were bramacaris. Davendranatha was at that time a very beautiful, young brahmacari of 15 years. And Tamal Krishna, Jayapataka, Bhagavan, and all others were like that. After Srila Prabhupadas departure, however, many became very weak and hopeless.

I also don't want to go to wealthy persons, to beautiful persons, or to very learned persons. If they will come, oh, they will ruin everything. I know it is very hard to control them. So I want that we go to common people and preach. I am not seeing that same enthusiasm and spirit which was there during Srila Prabhupadas time. You should have the same spirit-and then you can preach. Go door to door. Don't be afraid that, "He will beat me with a wine bottle." Never. Don't fear.

Nityananda Prabhu went to Jagai and Madai and said, "What are you doing? You should chant Hare Krishna just once."

So I want the same spirit. The books should be distributed everywhere, and preaching should also be in that spirit. Don't think, "I don't know anything, I am so weak." Krishna will give intelligence. I was also very weak, like dry straw. But then I became so strong to preach and serve my Gurudeva, om nitya lila pravista visnupada astottara-sata Sri Srimad Bhakti Prajnana Kesava Gosvami Maharaja. All qualifications are gradually coming and helping me, even though I am now in old age. So you are not weak. The atma is not attained by any weak person: 'Nayam atma pravacanena labhya.' A weak person cannot do anything. He cannot give up a single farthing. He cannot give up any of his attachments-because he is weak. I want to make them all strong.

Even ladies should be strong-like Draupadi.Her father Drupada Maharaja made a pillar, on the pillar he placed a moving chakra, after that was a fish, and on the fish were two eyes. And he then told his assembly, "I will marry my daughter to that person who can shoot the eye of the fish while looking at its reflection in the oil." A date was fixed and everyone came-all the Kauravas, Durodhana, Karna, Bhisma Pitamaha and Krishna and Baladeva. Arjuna, and the other Pandavas also came, disguised as brahmanas. All the ksatriyas were trying but they were not successful. Bhisma Pitamaha took his bow and arrow, and he was ready to shoot. But Draupadi at once came and said, "Are you willing to marry me? Why are you doing this?"
He replied, "I'm doing this for Duryodhana."

"Oh please sit down". She was so bold.

Then Karna came, and he wanted to shoot, but Draupadi boldly came again and asked, "Who are you? What is you name and who is your father?"

Karna became so upset. Nobody had ever spoken to him like this in his whole life. Feeling insulted, he threw down his bow and arrow, became very angry, and said, "I will take revenge. I must take revenge."

Krishna was looking on. He could have shot the fish. He was a better archer than Arjuna, Bhisma Pitamaha and all others. But He and Baladaeva Prabhiu were just sitting there and watching. They were giving a chance to that brahmana boy. When that brahmana boy came, all the others asked Draupadi, "Who is he? Will you marry a brahmana?"

Arjuna then went to the arena and very easily shot the eye of the fish. All the kings present there began to make war against him. They said, "We will take Draupadi forcibly." But Krishna and Baladeva came and said to these kings, "If you come, we are ready to fight."

So Draupadi was so bold. Be bold like Draupadi. Don't think that you are ladies. Preach and go on your path-be very straight and very bold. You should all try to preach and distribute books. By this, we will again very quickly preach all over the world.