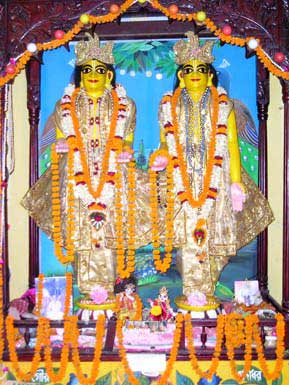 Srila Bhaktivedanta Swami Maharaja came to this world with the mission of Iskcon – Vaisnavism. What was that? It is the same mission as Sri Caitanya Mahaprabhu. And who is Mahaprabhu? He is the Supreme Personality of Godhead, Lord Sri Krsna Himself. But He is also more than that; He is not only Krsna. He is the combination of both Srimati Radhika and Krsna. Sri Krsna has combined with Srimati Radhika, His power.

Sri Caitanya Mahaprabhu used to always be absorbed in Radha's mood. Krsna Himself could not possess Her beauty or Her intrinsic mood. Radhika has adhirudha mahabhava, and even more than that. Krsna's mood goes up to mahabhava, but after that, He Himself does not know the mood of how to serve and please Him. He has to learn that by going to the school of Visakha-devi, and sometimes Lalita-devi. Without the help of Lalita and Visakha, He cannot relish the mood of Srimati Radhika.

This was the mission of Sri Caitanya Mahaprabhu – to give the service of these moods. Krsna Himself could not do this, but when He took the beauty and the intrinsic mood of Radhika, He could then relish Her moods in Gambhira under the guidance of Svarupa Damodara (Lalita) and Ramananda Raya (Visakha).

At this time Gadadhara Pandita, who is Radhika Herself, serving Sri Krsna in Sri Caitanya Mahaprabhu's pastimes, was watching to see whether or not Mahaprabhu was playing Her role perfectly. If Krsna as Mahaprabhu would make a mistake in feeling and displaying the mood of Radhika, Gadadhara Pandita prabhu would 'twist the ears' of Krsna. He would say, "Oh, You are doing it wrong. You should it do it like this."

Once, when Mahaprabhu was singing, "Barahapidam nata-vara-vapu...," Sri Gadadhara Pandita quickly came and said, "Oh, You should do it like this:

''Wearing a peacock-feather ornament upon His head, blue karnikara flowers on His ears, a yellow garment as brilliant as gold, and the Vaijayanti garland, Lord Krsna exhibited His transcendental form as the greatest of dancers as He entered the forest of Vrndavana, beautifying it with the marks of His footprints. He filled the holes of His flute with the nectar of His lips, and the cowherd boys sang His glories.''

Although Krsna, as Mahaprabhu, was perspiring, His heart melting, and His tears falling like heavy rain, there was some defect, and Gadadhara Pandita therefore instructed Him by showing Him through his own example.

To think that Sri Krsna had taken away the beauty and intrinsic leftwing mood of Radhika to become Sri Caitanya Mahaprabhu, and that Gadadhara Pandita had thus become Rukmini, is quite wrong. It is not like that at all. *

Srila Bhaktivedanta Swami Maharaja came for the same object and mission as Sri Caitanya Mahaprabhu – that the jivas should be given raga-marga. They should know the identity of Srimati Radhika and the nature of all Her moods. However, when he came to New Jersey, Boston, and New York, he saw that he had to first cut so many jungles. If the land of people's hearts is not fertile, how can the seed of this bhakti be given? The jungles were very dense and wild, with so many wild beasts, dangerous animals, and poisonous snakes. It took time to cut those jungles, and at the same time Pujyapada Srila Svami Maharaja kept everything reserved in his books. He told his disciples to read about the life and character of Prahlada Maharaja, Citraketu Maharaja, and others. He had so little time, because the 'bell rang' and Krsna called him, ''I cannot remain without you. I need your service. Please come at once.'' He was bound to go to his Prabhu.

Yes, he has given everything, but you will have to go deep into them with the help of any pure Vaisnava:

"If you want to understand Srimad-Bhagavatam, you must approach a self-realized Vaisnava and hear from him. You can do this when you have completely taken shelter of the lotus feet of Sri Caitanya Mahaprabhu."

[The second excerpt is from a lecture given by Srila Gurudeva on the morning of July 8, 2000. There, he explained the essence of Sriman Mahaprabhu's appearance in a most interesting way:]

Sri Krsna is the Supreme Almighty, but if you go deep into the scriptures you will see so many more things about Him, as given us by Srila Rupa Gosvami. Krsna wanted to attract the fallen souls to Him, and He wanted to give the ocean of rasa, Srimati Radhika's mahabhava, to the world – but He could not. He could only give His own love, not love TO Him, which only Radhika has in completeness. He would therefore have to steal Her beauty and mood.

He could not steal it, however, because Radhika is always alert and more clever and intelligent than He. He could only have the wish for it, and therefore He had to beg Her. Her sakhis were also present when He prayed to Her, "I beg Your mercy, Your beauty, and Your mahabhava." Srimati Radhika replied, "Yes, I'm donating it for some time, but You will have to attend the class of My sakhis (Visakha-devi in the form of Sri Ramananda Raya, and Lalita in the form of Sri Svarupa Damodara) so that they can sprinkle that upon You. And I will also be there (as Sri Gadadhara Pandita). Krsna was thus able to come and give what no other incarnation or acarya gave before: manjari bhava, direct service to Srimati Radhika as Her maidservant.

*Endnote: (from Srila Gurudeva's lecture in Jagannatha Puri, on October 7, 2001)

One should not think that when Sri Caitanya Mahaprabhu took Srimati Radhika's bhava She became zero. In a drama, someone may take the part of someone else who is present in the audience. That second person has not become zero. Someone may play Radha and Krsna, and Radha and Krsna may also be present, watching. Similarly, when Lord Sri Krsna 'took' the bhava of Radhika and became Sri Caitanya Mahaprabhu, She was also present, watching, in the form of Sri Gadadhara Pandita.

Srila Gurudeva: Gadadhara Pandita is always serving Krsna. In Krsna-lila, whatever Krsna wishes, Srimati Radhika always serves Him more than Candravali, Lalita, Visakha, and all others. Her whole mood is to satisfy Krsna. In Mahaprabhu-lila, because Krsna wants to relish His own self, He takes Radhika's mood, and She responds accordingly: "He wants that, so I should not disturb Him. If I help Him in this, this will be My service." Do you understand?

Srila Gurudeva: In Navadvipa also. At that time Gauranga was also calling out, "Krsna, Krsna," not "Radha, Radha." But at that time He was untrained. He was not yet admitted in the school of Visakha – Sri Svarupa Damodara. At that time also, Gadadhara Pandita always served as an obedient servant, covering all his moods as Srimati Radhika.

Srila Gurudeva: Same mood. Gauranga was not in the mood of nagara (Krsna as the male lover). We never accept Him as nagara.