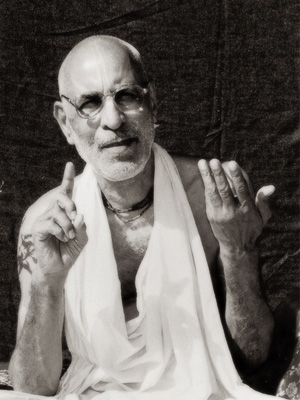 [Brajandanandana dasa:] Gurudeva, now that you are leaving New Vraja, there is not too much opportunity to have association with advanced Vaisnavas. Would it be good that we come together and have evening programs at our different houses, knowing that you will be present and that it will please you?

[Srila Narayana Maharaja:] You can read the books of the Gosvamis, and you should think that that association is more than me. But it is very hard to realize this. Therefore,

["If you want to understand Srimad-Bhagavatam, you must approach a self-realized Vaisnava and hear from him. You can do this when you have completely taken shelter of the lotus feet of Sri Caitanya Mahaprabhu." (Cc, Antya 5.131)]

However, if you have no opportunity, then you should read yourself. It will help. You will be able to make more prominent and fixed, whatever you have heard from me or any high class of Vaisnava, by reading. Understand? By their example, behavior, mood, love and instructions, if a Vaisnava has given the light by which you can read books, oh, then you can go deep. Hearing is guru-seva. If you are engaged in book distribution and neglecting hari-katha from your Gurudeva, and you are thinking that to distribute books is more important than hearing, you are wrong. To hear is also guru-seva. By hearing you will be strong and you can serve. Otherwise you cannot.

[Srila Narayana Maharaja:] Because your Prabhupada has taken sannyasa from our Gurudeva, it means he is also a siksa disciple. So his name should be just below. Yes. Our Gurudeva, then him, then ourself.

[Syamarani dasi:]It seems that when our Prabhupada wrote down that list in the beginning of Bhagavad-gita, it was because we were not qualified to fully enter the line yet. We were just doing sukritis and so on. The line of disciplic succession went from his Prabhupada to himself, and Srila Bhakti Prajnana Kesava Gosvami Maharaja wasn't there. Now we know that Prabhupada wants us to come in the line more completely. Even though he didn't do it before, he wants us to do it now.

[Devotee:]I am wondering how a devotee from a very low stage, like myself, can develop nistha.

[Devotee:]How can I develop stronger sraddha?

[Srila Narayana Maharaja:] Then I will say that, "It is by association of a high class of Vaisnava." Then you will ask, "How this will come?" Then I will tell you, "By sukriti." And then you will ask, "What is sukriti and how will sukriti come?" You should increase your sukriti so that high association will come and Krishna will arrange everything. Nistha will then come, as your anarthas will go away. Worldly requirements will go away, and nistha will come.

[Devotee:]Gurudeva, should I make all endeavors to travel with you?

[Srila Narayana Maharaja:] It may be okay. Or it may be that if any boy has many anarthas and is always with Gurudeva, then he will behave something like monkeys. There were two monkeys who always wanted to serve Gurudeva. They wanted to be with him and serve him, and they divided the Guru's body into two. One boy told the other, "This left side is mine," and the other said, "The right side is mine." One day, the 'leftist monkey' was fanning, and his fan accidentally touched the Guru's right foot. The other monkey said, "Oh, you have beaten my Gurudeva. He then took a thick stick and made a blow on the left side. Then Guru Maharaja said, "Oh, why are you doing this?" They were quarreling, "This is my side" "This is your side." "Since you have struck my side with a danda, I will do like this." He did it, and the Guru died. So don't be like monkeys. Understand?

They want to come to me and they do. They behave like this because they have so many unwanted things in their hearts, like anarthas and aparadhas. If they are always with Gurudeva, they will make problems. They are bound to do so.

So sometimes we should think how to obey him. We should do what he wants. If we say that, "I will be with you, cook for you, wash your cloth, and do everything for you, then you may not follow me. You will be a 'seva dasi', and Mahaprabhu was very much against this. You should try to follow what Gurudeva tells. Srila Haridasa Thakura told the prostitute, "You should remain here and chant 3 lakhs of Names. And don't collect anything you don't need. Only two chapatis, and only two cloths - very simple, white - only for changing after taking bath. I am giving you this Tulasi plant. You should serve her daily and do parikrama. So many people will present so many things to you, but take only what you actually need. Nothing else". She did this, and thus all Vaisnavas came to take her darsana. She did not tell Haridasa Thakura, "If you are going, I want to go. I will go." Whatever Gurudeva orders, I should understand and follow.

[Syamarani dasi:]There is another question. When I was in San Diego I quoted what you said in Hawaii and Holland - when offering bhoga we should not say "Namah Om Visnupadaya... namo maha vadanyaya...", etc. Rather, the correct offering mantras are required. I told the devotees that Srila Prabhupada did not intend that we continue those mantras for offering. But some devotees responded by saying that actually the mantra is "syat" or "perhaps required." They say that they have not read anywhere in Srila Rupa Gosvami, Srila Jiva Gosvami, or Srila Visvanatha Cakravati Thakura that the particular mantra matters in offering bhoga.

[Srila Narayana Maharaja:] You should go to Srila Gopal-guru Gosvami and Srila Prabhupada Bhaktisiddhanta Sarasvati Gosvami Thakura. They have mentioned everything. Our nearest acarya is Srila Bhaktisiddhanta Sarasvati Thakura, and we derive all this from my Guru who has served Prabhupada, so much. If they are my disciples they should follow me. They should not do it any other way. I have explained everything according to our Guru-parampara. My disciples should follow and obey me. If they are not my disciples, they can follow their guru and do what they want.

[Syamarani dasi:]I gave your example that if a person brings plates of prasadam to some devotees and then just offers them obeisances and walks away with the plate, that is like when you say "Namah om visnupadaya". This offers obeisances, but not the prasadam.

[Devotional service of the Lord that ignores the authorized Vedic literatures like the Upanishads, Puranas and Narada-pancaratra is simply an unnecessary disturbance in society. BhRS 1.2.101)]