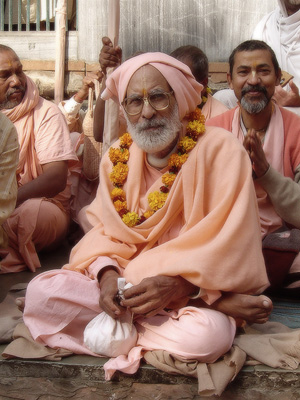 [The following is a synopsis of Srila Maharaja's class, which was given at the home of a disciple who lives just next door to the Sri Kesavaji Gaudiya Matha. It was made from notes taken during the translation.]

This is Kamsa Tila, the place where Krsna killed Kamsa. Tila mean hill, and it was upon this hill that Kamsa was sitting when Krsna pulled him from his dias. Our temple, Sri Kesavaji Gaudiya Matha, is situated in part of Kamsa's wrestling arena, and it is also where Krsna and Balarama killed the elephant demon.

Kamsa was very, very cruel. He had invited all of Krsna's relatives -- Ugrasena, Vasudeva, Devaki, Nanda Baba, and some of the sakhas -- to the wrestling arena. He wanted Krsna killed in front of them, as this would add to his happiness. When Krsna dragged Kamsa from the dias, He was pulling him by the hair, because Kamsa had caught Devaki by the hair on her wedding day. Krsna then threw him on the ground and jumped onto his chest. Because Krsna' s body contains all of the universes, the weight of all of the universes was felt by Kamsa at that time. He specifically jumped on Kamsa's chest because Kamsa had struck Vasudeva on the chest with rocks during the time he was in prison.

Because Kamsa had the strength of one hundred thousand elephants, there was doubt that he was really dead. Some thought that perhaps he was just unconscious. Therefore, to show everyone that he was dead, Krsna pulled him around the wrestling arena. When Kamsa's body was later dragged down to the ghata, it made a gully called panca-pada which is now the sewage drain behind the Matha. After Krsna killed Kamsa, He went to the jail and unchained Devaki and Vasudeva. Vasudeva and Devaki offered prayers, addressing Krsna as Bhagavan. After this they asked Him, "What sinful activities could we have done that You left us for ten and a half years, and that we were put into chains in Kamsa's jail?" Krsna replied, "O Ta, father." Krsna called him 'Ta,' and at the same time He called Yogamaya to cover Vasudeva so that he would think Krsna his own son. Without doing this He could not continue His lila. Thus covered by Yogamaya, Vasudeva thought, "O my son", and he forgot about his previous question. When Yogamaya covers the devotees for lila, she is known as Samukha Mohini. When she covers the conditioned souls, however, she is called Bahirmukha Mohini, or Mahamaya. Vasudeva Krsna had appeared in the heart of Vasudeva, and Vasudeva had impregnated Devaki by mantra. This is called sambhanda-jnana. The guru gives his disciple a relationship with Krsna by mantra.

Ugrasena now called Krsna to make Him the King of Mathura, but Krsna said that He could not be King because the Yadus had been cursed never to become kings. Krsna told Ugrasena that he was in the Bhoja dynasty, and therefore he should be the King.

As these incidences transpired, Nanda Baba was waiting at the bank of the Yamuna. He was thinking that Devaki and Vasudeva must be showing Krsna and Balarama so much affection that They would not want to go back to Vrndavana with him. They came in the evening, and each sat on his knee. Krsna sat on his right side, and Baladeva sat on his left. He asked Them, "Why did you wait three days to come? Do You think You are the sons of Devaki and Vasudeva?" They replied, "No, father. As soon as We were born, Devaki and Vasudeva made us leave their house, whereas you have fed us from a young age". Whoever shows love and affection is the parent. Nanda Baba was so kind that he was thinking, "How can I take them from Devaki and Vasudeva? Maybe Baladeva can stay to pacify Devaki." When he suggested that, however, Baladeva said that He could not stay without Krsna.

Just by touching this place where Kamsa was killed, Rangesvara, one will become purified. One who even spends one night here with faith, will never again take birth in the womb of a mother. Even those who come here for business will get very much benefit. This is because they are somehow attracted to this place, and they may come in contact with sadhus.

[Srila Maharaja indicated that he would be continuing these discussions between Krsna, Balarama, and Nanda Baba for the next several days.]