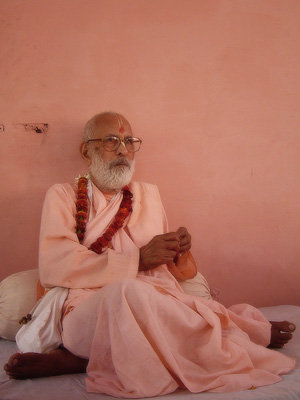 The evening after Krishna killed Kamsa and made Ugrasena king, He and Baladeva met Nanda Baba and tried to satisfy him. Krishna and Baladeva went to Vrindavana in one prakasa and in another stayed in Mathura. In one prakasa Nanda Baba went to Vrindavana alone and was very sad. He was weeping bitterly and feeling so much separation. In another prakasa Krishna returned and played with the gopas, gopis and cows. This was not seen by people in general, but the separation mood was seen by all.

In Mathura Krishna's yajna-pavitra (sacred thread ceremony) was performed, because the Yards wanted Him to think that He is Devaki and Vasudeva putra. After that they sent Him to the asrama of Sandipani Muni, where He learned sixty-four arts in sixty-four days. He learned vidya, archery, politics and many other subjects. The sisya goes to his guru to learn two kinds of vidya, knowledge: para and apara. The four Vedas, that is, Rg, Artharva, Sama, and Yajura, and the Upanisads and their teachings, are para vidya, spiritual or transcendental knowledge. The Vedas contain so much knowledge, but there is no description of prema. Srimad Bhagavatam is paravidyavadi. Everything is complete there. Krishna also learned worldly knowledge, like kalpa, jyotisa, astrology, and vyakarana, grammar,

When His training was complete, just before His return, Krishna asked His guru what daksina He could give. His guru said, "By association with You all my material desires have vanished. I only want bhakti to You. But I will consult with my wife." His wife requested that Krishna bring her dead son back to life. He had been playing on the beach, and somehow he drowned. Krishna and Baladeva went to the shore of the ocean and ordered the god of the ocean to give back that son. The ocean replied, "He is not in my grip. He is in the grip of the demon Pancajanya, who is in the shape of a conch-shell." Krishna entered the sea and killed the demon, but He and Baladeva did not find the boy. Krishna took the conch-shell and went to Yamapura, the kingdom of Yamaraja, where innumerable jivas are suffering. When Krishna blew His conch, all became happy. By Krishna's presence, the entire atmosphere became sweet. Dharmaraja welcomed Them. When Krishna ordered the boy's return, Dharmaraja said that he had vanished, but by Krishna's order his form returned. The boy offered many prayers, and Krishna then returned him to his father. Krishna asked His guru what further daksina He could give, and Sandipani Muni replied, "You have already made me world-famous. I don't want anything from You but Your bhakti."

Who was the son of Sandipani Muni? Madhumangala. How did he become his son? He had come with Krishna from Vraja. We learn from Srila Rupa Gosvamipada that just as Visakha and Srimati Radhika entered the Yamuna, and from there reached the Sun-god, and from there went to Dvaraka; and just as Candravali became Rukmini, the daughter of Bhismaka, and just as all the asta-sakhis became mahisis, and other gopis became their girlfriends; and just as all of Krishna's sakhas became His sons and nephews in Dvaraka as members of the Yaduvamsa; similarly, Madhumangala, playing by the sea in Dvaraka, became the son of Sandipani Muni.

They had all changed their dress and mood. They are the same personalities, but at the same time different. I saw a lady who was about forty years old. When she dressed in an Indian sari she looked like herself. Sometimes, however, she dressed herself differently. She wore tight pants, an abundance of cosmetics, hardly anything on the upper part of her body, carried a western shoulder bag, and briskly strutted along. She looked about sixteen years old, and onlookers could not recognize that she was the same person. She had certainly changed. Similarly, Madhumangala had changed. All the changes of Krishna and His associates were arranged by Yogamaya.

Sometimes Krishna used to come to Radharani and the gopis, disguised as Syama-sakhi and other so-called gopis. He was even able to imitate Radharani's voice, and sometimes even She could not recognize Him. These disguises were part of the sixty-four arts He had learned at the school of Sandipani Muni.