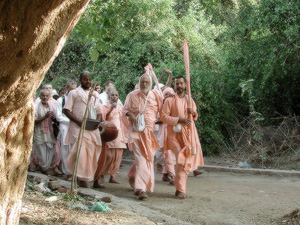 Yesterday I explained the reasons why Krishna left Vraja and did not return after killing Kamsa; and why He did not even visit there from time to time. I explained why He did not bring the Vrajavasis to Mathura, as He had previously brought the Mathuravasis to Dvaraka-in a moment-during the night. You should know all this first, and then you will be able to taste why Krishna wanted to pacify the gopis, what Uddhava did in relation to the gopis, and what he realized.

There are so many reasons why Krishna left Vraja, but they are not the real reasons. First I will try to reconcile the other reasons, and then I will tell you why He really left. If Krishna wants to go to another place without Devaki and Vasudeva's permission, He cannot go. Though they do not want Krishna to leave them, they will allow Him to go to places like Mithila and Janakapura. They know that after completing His 'job' He will return. Vrindavana, on the other hand, is rasamayi-bhumi. He would go there only to relish rasa. There is no time there, and He can sing there for many lives. That 'job' will never be finished. Krishna's and Balarama's hearts melt with a desire to go to Vrindavana. They are ready to go-but They do not.

If without permission Krishna leaves for Vrindavana, Vasudeva and Devaki would weep day and night. They would think that so many of their sons were killed by Kamsa, and now another Kamsa has come, in the form of Nanda Baba, and taken away their dearest son. Nanda and Yasoda will weep that, "There will be no welfare for my son," and Devaki and Vasudeva will weep because they want Krishna in Mathura. Nanda and Yasoda only want Krishna's happiness and welfare, and Vasudeva and Devaki see towards their own happiness.

Another point is that it may be possible for Krishna to go without telling anyone. He could go secretly-for a moment or for a day. He could go and meet all the Vrajabasis, and after consoling them He could return. Can this be? No, it cannot. A small lamp can be extinguished by a small wind, but a great fire will get larger by that same small wind. The Vrajabasis are like a great fire, and therefore their separation will only increase if Krishna would visit. The fire in the hearts of the gopis and other Vrajabasis is unlimited. If Krishna comes for one day, He would be burned in this fire. Therefore He could not go.

One solution is that Krishna bring all the Vrajabasis-the cows, gopis, and gopas-to Mathura. He is capable, but at the same time this can never be done. There would be an incompatibility due to different abhimanas. In Mathura Krishna is a ksatriya. He wears no peacock feather, He carries no flute, and He is like a raja-kumara prince. In Vrindavana He has a gopa's vesa and avesa, dress and mood. In Mathura He is para-devata, and therefore all worship Him. In Vrindavana, on the other hand, He is the servant of all. All the Yadus take His foot dust on their heads, but all the cowherd boys will jump on His shoulders and make Him their horse. Devaki fears to accept obeisances from Him, but Yasoda will bind His hands and say, "I'll not take you in my lap. Stay far away from me." In Mathura, Vasudeva offers stavas and stutis, prayers in His glory, but Nanda Baba will order Him to bring his shoes, and Krishna will carry those shoes on His head. Nanda Baba will give Him his remnants to eat, but in Mathura no one would dare to do so. In Mathura He will sit on a palatial throne, and in Vraja He will go cow-herding. There is a conflict between the moods of aisvarya and madhurya. In the mood of madhurya, especially Radharani will order Him to decorate and paint Her feet. He will put Her feet on His head, as a stamp, and He will say, "I am the certified, stamped dasa of Radhika." A flower on a tree has a very beautiful fragrance. When it is taken off the tree, however, it withers, loses its fragrance, and soon it becomes rotten. It is doomed.

If the Vrajabasis would come to Mathura and see Krishna sitting on a throne, they would be doomed. He would not be able to go to the lap of Mother Yasoda, and He would not be able to freely play with the cowherd boys. All will be doomed. This situation is called rasa-dusta, an incompatible mixing or overlapping of mellows-clash of mellows. What will the gopis do in Mathura? Will they make yogurt? To whose lap will Krishna go? With whom will He sleep at night? Not even a bird of Vrindavana will go to Mathura-not even a mosquito. They will die, but they will not go there.

Srila Visvanatha Cakravarti Thakura has explained why Krishna left. It was not because Akrura came. Once day, at Prema Sarovara, which is in between Varsana and Nandagaon, Krishna was sitting with Srimati Radhika, Lalita, Visakha, and all the gopis. Because Radharani's lotus feet are very fragrant and soft, a bumble bee thought they were a lotus and wanted to enter them, Radharani became fearful. Although She kept pushing the bee away, the bee became more and more attracted, due to the sweet fragrance. Krishna gave indication to Madhumangala to take the bee away. Madhumangala chased away the bee with a stick, and returned in a mood of victory. He said, "I took away Madhusudana and he will never return." In Hindi the word madhusudana means bumble bee and also Krishna. The bee likes to enjoy the honey of the lotus, and Krishna enjoys the honey of the gopis' love.

The highest stage of love is madanakya mahabhava. Although She was in the midst of meeting with Krishna, She thought that He was gone. She therefore adopted a mood of separation and fainted. When She regained Her consciousness she cried, "Where is Madhusudana?" Krishna was unable to pacify Her. He realized that this was the highest manifestation of mahabhava. It was so deep that even in meeting the separation mood was there-in the extreme stage. This stage is only present in Radharani. Even Krishna is not able to adopt it, and therefore, in order to taste this highest taste, He had to come as Sri Caitanya Mahaprabhu.

We do not have even sraddha. We will leave our gurudeva without a second thought. We leave for petty reasons. We do not know who he is-that he has been sent by Krishna, so that we can go to Krishna. Krishna is realized only by the mercy of gurudeva. We do not have one percent of sraddha, however, and therefore we cannot realize this.

Krishna never wants to leave Radharani. He thinks, "I will pacify Her by taking this harsh step. When she is separated from me, due to Her madanakhya mahabhava She will feel that she is meeting with Me." When She sees a tamal tree She runs to embrace it, thinking that it is Krishna Himself. Thinking Him present, She will cook for Him and decorate Herself for Him. Then Her separation will be pacified to some extent. Krishna therefore decided to leave. He was afraid that again she would feel that separation, and that will be a disturbance to His own heart.

'Evam vrttam sva priya nama krtya.' In Navadvipa, Srivasa Pandita entered the classroom of Devananda Pandita, where he was singing, "barharpidam nata vapuh." Hearing this description of Krishna in the forest of Vrindavana, Srivasa Pandita cried, "Ha Krishna," and fainted. We see in Srimad Bhagavatam that when a very high class of devotee chants Krishna's names, he rolls on the ground, weeping, weeping, weeping, and weeping bitter tears. His heart is melting, and sometimes he laughs as if he is meeting with Krishna. All these conditions come to such a devotee, but we cannot realize any of it because we have no love and we do not try for it. You can realize this if you have bhava.

So, under the guidance of Srila Rupa Gosvami, Srila Visvanatha Cakravarti Thakura is explaining all this. Our prayer is that some day all these thoughts will touch our hearts.