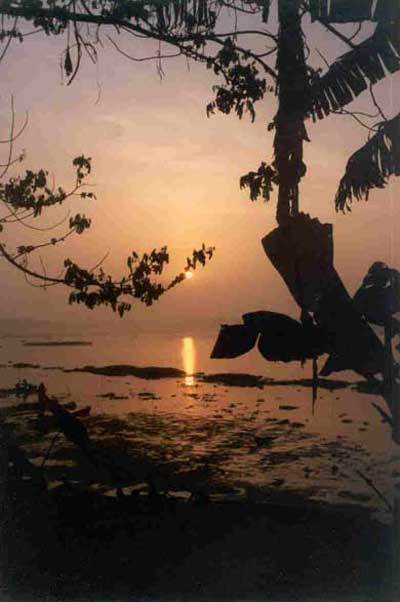 [For Makhara-sankranti, the anniversary of the day Ganges descended to this world,  Srila Narayana Gosvami Maharaja gave class about this holy day in Hindi. A summary of the translation, given by Sripad Madhava Maharaja, is as follows:]

There are many lines on the Earth, like the Equator, the Tropic of Cancer and the Tropic of Capricorn. In the Sanskrit language, these lines are called rekhas. In Vedic Astronomy these rekhas are called Bhumadhya-rekha, Karka-rekha, and Makhara-rekha. In its travels, the Sun is always somewhere between these lines. The day on which it comes nearest to Makhara-rekha is called Makhara-sankranti. After that, it comes back to either of the other two lines.

Surya, the Sun, gives life potency to the living entities. Because of its connection with Surya, Makhara-sankranti is very auspicious. On that day, almost everyone with any connection to Vedic or Indian culture takes bath, either in the Godavari, Jamuna, Ganges, or in any other river, or in the ocean. This takes place especially in India, but it also goes on to some extent around the world. On this day, it is auspicious to give donations to others. Yudhisthira Maharaja gave so much in charity on this day that he and his family had nothing left, and he was praised for this all over the world.

While he was taking rest that night, a flock of swans were flying overhead, talking to each other. One swan said, "I never saw such a big donor as Maharaja Yudhisthira."

Another swan replied, "Don't praise him so much. If you want to know who is the best donor, it is Reikhya Muni."

"Yudhisthira is a great Emperor. His wealth is incomparable. Therefore, though he gives so much, he is only giving a part of his wealth. Reikhya Muni has no kingdom - nothing. He does Silanache Vrtti. When the farmer takes grains from the fields and some of those grains fall to the ground, this Muni goes and collects those grains, like barley and wheat, cleans and roasts them, and then distributes them. He never thinks of his own welfare."

Yudhisthira Maharaja was listening to all this, because he understands the language of the birds. On the next day he asked Krsna, "Who is Reikhya Muni?" He told Krsna what had transpired the previous night, and Krsna then took him to see Riekhya Muni, who was then living under a bullock cart. They offered pra nama to him, and then they all conversed together.

If one gives donations on this auspicious day, in his next life he'll never be in want. That is because this day is in relation to the Sun, who gives life.

[The information in brackets is given by Sripad Madhava Maharaja, Srila Narayana Gosvami Maharaja's servant.]

Yesterday was Makhara-sankranti, the descending of the Ganges River. All Indians, even those living very far away from Ganges, will somehow go there to take bath. When I was a little baby in India, I used to take bath with my father on this very day. I remember that although it was very cold, still I would jump in. On this day, all the bathing ghats are full with hundreds of thousands of people.

[At a darsana given one day later, an Indian guest asked Srila Narayana Gosvami Maharaja about the benefits of giving donations on the auspicious day of Makhara-sankranti. Srila Maharaja replied that the best and only really valuable donation to give is hari-katha and Krsna consciousness.]