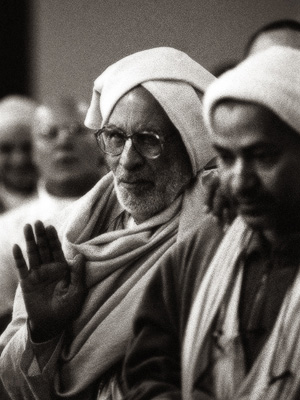 [This year's (2004) Purusottama Masa Jagannatha Puri parikrama, led by and under the guidence of Srila Bhaktivedanta Narayana Maharaja, is based at Sri Caitanya Gaudiya Matha,the birthplace of Srila Bhaktisiddhanta Sarasvati Thakura's Gaudiya Mathas. On the first day, Aug 5, 2004, Srila Maharaja took the international pilgrims to the Sri Gambhira and then to Siddha-Bakula, which is the bhajana-sthali of namacarya Srila Haridasa Thakura. He spoke at length at both places, and also called on other Vaisnavas to speak. After that the devotees went to the house of Sri Sarvabhauma Bhattacarya and then to the famous Sri Jagannatha Mandira.

In 2001, for Purusottama Masa, Srila Bhaktivedanta Narayana Maharaja led 600 pilgrims to the Gambhira, where Lord Caitanya Mahaprabu lived for over 12 years. After everyone took darsana of Sri Sri Radha-Kanta and the deity of Sri Gopal Guru Gosvami, Srila Maharaja spoke about the glories of the place, and the glories of the holy name, in Hindi, Bengali, and English. The following is a transcript of the English sections.]

I have already explained how Sriman Mahaprabhu used to leave from here, crossing through seven doors, how He used to be in Vallabha Baithaka, where we went for parikrama, and how He used to go sometimes to Jagannatha temple, sometimes to Cataka Parvata, and sometimes He would jump in the ocean. He performed very wonderful pastimes here.

Gambhira is the place were all the devotees from all over Bengal and elsewhere used to assemble and meet with Sri Caitanya Mahaprabhu, and Vallabha Bhatta also met Him here.

All types of auspiciousness are present in the holy names. This is not worldly auspiciousness. It is transcendental. All kinds of auspicious qualities will manifest by the names, and bhakti will also come. Sreyah-kairava-candrika-vitaranam.

Anandambudhi-vardhanam. After passing the previous stages, one will realize his gopi form, or whatever form he has in his constitutional position. The spiritual form will manifest according to the kind of greed present during the time of one's sadhana-bhajana. He will be under the guidance of a Vrajavasi, like Sridama or Subala for sakhya-rasa, and those in other rasas will be under the guidance of Krsna's associates in that rasa. For madhurya-rasa, one is especially under the guidance of Sri Rupa Manjari and Sri Rati Manjari, and he will relish so much the waves of that high class of love, like the high waves in the ocean.

Then, prati-padam purnamrt-asvadanam. Though all jivas are infinitesimal, if their love and affection is for Krsna, it will be unlimited like Krsna. It will be depthless and bottomless. When the devotee leaves his body, he will not come back from the ocean of love. He will sink here, and he will come out there, in Goloka Vrndavana. These are the influences of harinama.

Namnam akari bahudha nija-sarva-saktis. Harinama is Sri Krsna Himself, and it has unlimited power. It can do anything that is impossible to be done.

There are rules and regulations regarding gayatri mantra, which brahmanas utter at the times of sandhya, the three junctions of the day. You may not perform sandhya at any arbitrary time. Sandhya can be performed at a special time - at sandhya. It can be done in the early morning, the junction between night and day; at noon, the junction between morning and afternoon; and in the evening, the junction between day and night. In this way there are three sandhyas (time periods). You cannot do sandhya at midnight. I see that so many devotees who do aanhik (diksa-mantras) at about nine or ten, before taking prasadam, and some also do it after prasadam. This is wrong. Don't do this. Especially try to do it in the early morning, from one hour thirty-six minutes before sunrise until sunrise - not after that. At midday, you can do it at twelve or some fifteen minutes later, and in evening you should do it at about 6.30 p.m. If you do not do it at the proper time, the proper fruit will not come.

On the other hand, there are no rules for chanting harinama. It doesn't matter whether you have taken any prasadam or not, whether you are pure or not, or whether it is day or night.

Trnad api sunicena taror api sahisnuna. The tree never asks anyone for anything. He gives his bark, his seeds, leaves, flowers, fruit, and everything else to others, but he never asks even for water. He will dry up but still he will not ask. If you want to have prema, anuraga (great attachment), for krsna-nama, you will have to follow the example of that tree. Lord Krsna told all these principles to Baladeva prabhu. We should be like those trees.

Amanina manadena kirtaniyah sada harih. There are so many things to desire, but don't have any desires. Pray, "O Lord Krsna, please be merciful to me so that all kinds of worldly desires will go away. I only want to serve You." Pray for ahaituki-bhakti, causeless devotion.

Ayi nanda-tanuja kinkaram / patitam mam visame bhavambudhau / krpaya tava pada-pankaja- / sthita-dhuli-sadrsam vicintaya. Pray to become a particle of dust at Krsna's lotus feet: "I want to be at Your pure lotus feet, serving You." This is our constitutional position. When our transcendental form will manifest, then:

Bhavavasta (the status of bhava-bhakti), svarupa sakti, the essence of hladini and samvit, mixing on the platform of sandhini, has now come.

You should hear about this, and then try to realize these truths by practice. This stage of bhava comes only by the mercy of Krsna and His associates; otherwise you cannot attain it. The perfection of bhava is found in the associates of Krsna. They are ragatmika - Subala, Sridama, Nanda Baba, Yasoda, the gopis, and especially Srimati Radhika. By practicing and always praying for mercy, it may come, and your life will then be successful.

Yugayitam nimesena / caksusa pravrsayitam. At this time, one moment seems like so many yugas, and a yuga becomes like a minute. At that time one always weeps in separation. At that time devotion is continuous, like the flow of honey from a jar. Sri Caitanya Mahaprabhu used to weep during Ratha-yatra, "Where is my Prananatha?" His tears fell like rain, wetting all His associates who were with Him. We cannot imagine this stage. At that time suddha-sattva has come and the universe feels vacant.

"Krsna may be a cheater, black in heart and also outside. He may also be a lampata, a debauchee. Whatever He may be, He is My Prananatha, the lord of My life's breath. Even if He engages in sportive pastimes with other gopis in front of Me, no harm. He is My Prananatha."

"Sri Caitanya Mahaprabhu continued, 'My dear friends, I have not the slightest tinge of love of Godhead within My heart. When you see Me crying in separation, I am just falsely exhibiting a demonstration of My great fortune. Indeed, not seeing the beautiful face of Krsna playing His flute, I continue to live My life like an insect, without purpose.'" (Cc Madhya 2.45)

"By chanting the holy name of the Supreme Lord, one comes to the stage of love of Godhead. Then the devotee is fixed in his vow as an eternal servant of the Lord, and he gradually becomes very much attached to a particular name and form of the Supreme Personality of Godhead. As his heart melts with ecstatic love, he laughs very loudly or cries or shouts. Sometimes he sings and dances like a madman, for he is indifferent to public opinion."

[Sripad Ramacandra dasa Adhikari (translating Srila Maharaja's Hindi):] Sri Gopal Guru Gosvami was living here in Puri. From his childhood he associated with Sri Caitanya Mahaprabhu as His servant. He would accompany Him when He went for His bodily duties in the forest. Once, seeing Mahaprabhu holding His tongue when He went to pass water, he asked the reason, and Mahaprabhu answered that He didn't want the pure holy name to be in a contaminated place, and so He was forcing His tongue not to chant. Gopal Guru told Him that at the time of death one is very contaminated, but still he must chant. Appreciating his statement, Mahaprabhu told him, "You are My guru."

Dhyanacandra prabhu replied, "I don't have any documentary proof. My Gurudeva has given me this status. He made me take charge of his place, and therefore I am naturally doing whatever he orders me to do."

They said, "No, no. We don't accept this. We want some documentary proof." Someone from Vrndavana came then and told Dhyanacandra prabhu, "Your Gurudeva, Gopal Guru Gosvami, is in Vrndavana. I have seen him. He is in Dhira Samira" Dhyanacandra prabhu immediately left this place and went to Vrndavana on foot. He reached there after three or four months of walking, and there he saw his Gurudeva. He paid his obeisances and began weeping, "Please come with me to Puri and tell your king that you have situated me on that seat."

Sri Gopal Guru Gosvami said, "No, I'm not returning to Jagannatha Puri. You can make a vigraha (Deity form) of me from the wood of a neem tree and install it there. After that everything will be better. Go and see."