All glories to Sri Sri Guru and Gauranga

The following is a holy heartfelt offering (puspanjali) at the lotus feet of Parampujyapada astottara-sata Sri Srimad Bhakti Pramoda Puri Gosvami Maharaja in his divine remembrance:

In November of 1946, I left my home and came to Sri Devananda Gaudiya Matha in Sri Dhama Navadvipa. After a short time, in 1947, at the end of Sri Navadvipa Dhama Parikrama, which was held on the occasion of the divine appearance of Sri Caitanya Mahaprabhu, I took shelter at the lotus feet of my most beloved om visnupada astottara-sata Sri Srimad Bhakti Prajnana Kesava Gosvami Maharaja. He made my life successful by initiating me with harinama and diksa initiations. After celebrating the holy festival of Gaura Purnima and Sri Dhama Parikrama, I accompanied Gurudeva to one of the branches of Sri Gaudiya Vedanta Samiti, namely Sri Uddharana Gaudiya Matha in Chinchurah.

It was there, at Sri Uddharana Gaudiya Matha, that I had the audience of Parampujyapada astottara-sata Sri Srimad Bhakti Pramoda Puri Gosvami's lotus feet for the first time. He had already accepted the renounced order on March 3, 1947 at Sri Gaura-Gadadhara Matha in Campahatti, from nitya-lila pravista om visnupada astottara-sata Srila Bhakti Gaurava Vaikhanas Maharaja, one of the prominent sannyasa disciples of jagad-guru Srila Bhaktisiddhanta Sarasvati Gosvami Prabhupada.

I was very impressed by my meeting with him, and my most beloved Gurudeva, Sri Srila Bhakti Prajnana Kesava Gosvami Maharaja, engaged me in his service. Every day I used to go with him to take bath in the Ganges nearby, carrying his outer garment, kaupin and kamandalu (water pot). After bathing, I carried his wet clothes and kamandalu, now filled with water, back to our Matha, and then I fed him prasadam. Moreover, I obeyed the many instructions he used to kindly give me on various occasions. I submissively put so many questions before him, and he used to reply to all my inquiries with great affection.

During our discussions in those days, he used to tell me some things about his life history. His name was previously Pramoda Bhusana. His parents were religious and from the brahmana (Cakravarti) caste. He took birth on October 8, 1898 in the village of Gangananda Pura in the district of Jessore, in the present-day Bangladesa. From his very childhood he was fond of hari-kirtana, chanting the Lord's holy names. He felt so much pleasure in hearing hari-kirtana that sometimes he would become forgetful of his bodily condition.

After completing his B.Sc. degree at Calcutta University, he wanted to continue his education, but the burden of maintaining his family fell on his shoulders. He unwillingly left his studies and accepted employment at the Post Commission in Calcutta. It was during that period that he met jagad-guru nitya-lila pravista om visnupada Sri Srimad Bhaktisiddhanta Sarasvati Gosvami Prabhupada and was deeply influenced by hearing his powerful hari-katha. In 1923, on the auspicious occasion of Sri Krsna Janmastami, he received diksa from Srila Prabhupada at Ultadanga Gaudiya Matha and was given the name Sri Pranavananda Brahmacari.

For the service of the brhad-mrdanga (book publication), Srila Puri Maharaja stayed in various places like Calcutta, Krsna Nagar, and Mayapura. For the sake of preaching gaura-vani, the message of Gaurasundara, he traveled not only throughout Bengal, but also to many places throughout India, and he met with great success. He sometimes traveled with his Gurudeva, Srila Prabhupada, and sometimes with the senior intimate sannyasa disciples of Srila Prabhupada. In this way he served his Gurudeva by internal, mano'bhista seva, fulfilling his innermost cherished desires.

Once, when we were at Chinchurah Matha, we went together for bathing in the Ganga. I was carrying his cloth and water-pot, and also my own lota (cup) that I still had from my previous home life. I put them down on the ghata and we both entered the water of Bhagavati Bhagirathi for bathing. After bathing I found that my lota was gone. It had been carried away by the waves of the Ganga, which was very near the ocean at that place. Pujyacarana Puri Maharaja smiled and said, "You left your home, family, wife, son and wealth to become a renounced Vaisnava, so what need is there to be attached to a lota?" I was also smiling. Taking his wet clothes and water-pot, we returned to the matha. As long as he was present, every time we met he used to remind me of this pastime, and I also cannot forget the mercy he showed to me throughout my life.

After a long time, Prapujya-carana Srila Puri Gosvami Maharaja was given the responsibility of serving the Deity of Sri Ananta Vasudeva of Kalna. The King of Vardhman was unable to serve this Deity. When he observed the pure disposition and devotion of Srila Puri Gosvami Maharaja, he was immensely impressed and offered the service of Ananta Vasudeva to him. Later, Srila Puri Maharaja took charge of the temple along with his disciples. I also went to have his audience there many times at Kalna.

I always saw him busy in writing. His pen never stopped. He used to spend every moment in writing articles about pure bhakti, whenever a chance came after completing his fixed number of rounds of harinama, serving the Deity, and studying the sastras. He also used to submit many articles to the journals of different Gaudiya Mathas. Especially, he was the editor-in-chief of "Sri Caitanya Vani", the journal of Srila Bhakti Dayita Madhava Gosvami Maharaja's Matha. 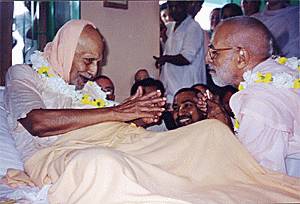 In the last years of his life, he stayed in Sridhama Mayapura, where he established Sri Gopinatha Gaudiya Matha at Isodyana. In the last stage of his life he stayed at Bankim Muhana Cakratirtha in Sri Purusottama Dhama. Finally, he entered into nitya-lila on November 22, 1999, at 2.07 am.

Whenever I used to go to Sridhama Vrndavana, Sridhama Mayapura, or Calcutta, I had the good fortune to have the audience of his lotus feet. At that time I used to present to him whatever new publications we had produced from our Matha in the Hindi language, such as Jaiva Dharma, Caitanya Siksamrta, the Teachings of Sriman Mahaprabhu, Srila Visvanatha Cakravarti Thakura's Bindu, Kirana and Kana, Upadesamrta, Manah Siksa, Raga Vartma Candrika and also some English publications.

He was delighted to receive all these books from me, and in return he inspired and instructed me to publish more books of the Gaudiya Vaisnava philosophy. Whenever we would meet he would ask, "What new publications are coming in Hindi?"

He was present to pacify us at the time our beloved Gurudeva entered into nitya-lila and also when the Samadhi Mandira was established at Sri Devananda Gaudiya Matha. During his visit, he told us with a melting heart, "Vinoda Da (Srila Bhakti Prajnana Kesava Gosvami Maharaja) was very affectionate to us. Whenever we knew that Vinoda Da was not in Mayapura, we would also cancel our scheduled program to visit Mayapura." He said that there was no one as warmly affectionate as Vinoda Da.

In this way, Srila Puri Gosvami Maharaja was fully surrendered and one of the internal associates of Srila Prabhupada. At the time of performing kirtana and giving lectures he would close his eyes, which were brimming with tears, being incessantly immersed in the bhava of bhakti. He would express such deep realizations while discussing bhakti-tattva and rasa-tattva that his whole audience would be enchanted.

He was the embodiment of Sriman Mahaprabhu's verse, "trnad api sunicena" (more humble than a blade of grass). He was a topmost self-realized devotee and always deeply appreciative of others' merit. Until this very day, I never saw him criticize anyone, and he even used to give inspiration and respect to this insignificant person who is thoroughly bereft of bhakti.

I often saw him walking with his danda, traveling barefoot in Navadvipa Dhama and eighty-four krosa Vraja Mandala Parikrama. Even in his advanced age, I saw him doing parikrama, without eating and drinking, and always singing kirtanas and speaking hari-katha.

I went to see him almost one month and fifteen days prior to his divine disappearance. At that time he was not speaking at all and he kept his eyes closed. I caught hold of his lotus feet and said, "I am your most insignificant servant, Narayana Maharaja." Upon hearing this, he caught both of my hands in his and gave me his blessings. Then he ordered his servants to give me prasadam. I do not know if he spoke to anyone else again after that moment. He entered into nitya-lila at the age of 101 years.

He was expert in all siddhanta and a pure devotee in the line of Srila Bhaktisiddhanta Sarasvati Gosvami Prabhupada, and I felt so much inspiration from his blessings and instructions. Now, after his entrance into the divine transcendental pastimes of the Lord, I am bereft of the touch of that hand which used to confer upon me profuse blessings and inspiration, and thus I feel a profound sadness in his absence.

In this way I am offering sri sri puspanjali at the lotus feet of such a parama-niskincana (topmost renunciate) mahabhagavata (most superior devotee), Sri Sri Bhakti Pramoda Puri Gosvami Maharaja. May he be pleased to shower his causeless mercy upon me.