Why Prabhupada Called Me to the West 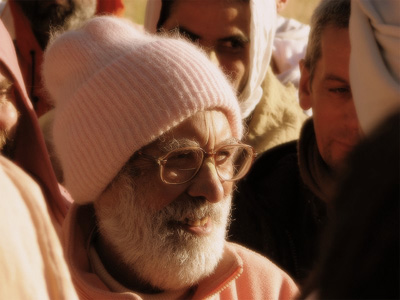 My siksa-guru, Srila Bhaktivedanta Swami Maharaja, forcibly dragged me to the Western countries. It is only by his mercy that I am going everywhere in the world. So many are hearing from me, only due to him. He especially ordered me, in his last days, to help his disciples and devotees, because he knew they would become very weak. He knew they would give up the mission and object of life that was preached by him.

So many have no faith in the present Iskcon, and so many are quarrelling. Nowadays, the most dangerous element is the rtviks. They think they are the real inheritors of Srila Bhaktivedanta Swami's Maharaja's mission, but actually they are against him. Besides them, there are presently so many sahajiyas who preach that Srila Swami Maharaja, Srila Prabhupada Bhaktisiddhanta Sara svati Gosvami Thakura, and Srila Bhaktivinoda Thakura are not in the guru-parampara. These sahajiyas are trying to cut down the tree of bhakti.

Many say that Srila Swami Maharaja was a follower of the rtvik system, but this statement is quite false. Srila Swami Maharaja accepted the guru-parampara, Sri Caitanya Mahaprabhu, Sri Nityananda prabhu, and the goal of life as shown by Srila Rupa Gosvami, Srila Krsnadasa Kaviraja Gosvami, the Gita and the Bhagavat. Since Srila Swami Maharaja accepted these principles, how can anyone say he accepted the rtvik system? Nowhere in Srimad Bhagavatam, Gita, or any other scriptures is it stated that the rtvik system has anything to do with the guru-parampara and bhakti. It has no connection with bhakti at all. The rtvik system is only employed for the performance of a fire sacrifice, for the fulfillment of worldly desires (karma-kanda). It is totally irrelevant to our bhakti, to Srimad Bhagavatam, to the Gita, and to our guru parampara. Srila Rupa Gosvami never mentioned anything about the rtvik system in his Bhakti-rasamrta-sindhu, Ujjvala Nilamani, or in his other books. Srila Sanatana Gosvami has written so many books, but he has never discussed the rtviks. You should therefore be very careful. Don't follow them.

Also, don't follow the sahajiyas. We should be very careful to avoid trying to become 'goopis' or to follow their ideas. Rather, we should try to follow Saptama Gosvami (the Seventh Gosvami), Srila Bhaktivinoda Thakura, Srila Prabhupada Bhaktisiddhanta Sarasvati Thakura, and Srila Bhaktivedanta Swami Maharaja.

Nowadays there are so many devotees who were personally following your Prabhupada, and by that they came in contact with this transcendental life. But now they are thinking that he was not sarvajna, not all-knowing or omniscient. What was he? Foolish? Ignorant? You know in His boyhood, that Krsna performed so many pastimes in which he appeared like a totally ignorant boy. But that does not mean He is ignorant or that He is not omniscient. And, if He is omniscient, why should His associates not be so? They must be. Some say that if Prabhupada knew that so many sannyasis and others would fall down, he would not have accepted them and given them sannyasa, but this argument is bogus.

It is for this reason, to correct all these misunderstandings, that Srila Swami Maharaja dragged me to the West to preach. He sent me to teach the devotees that they should not be weak, and they should not go to sahajiya bhabijis. They should be very careful. For this purpose, to protect devotees from being misled by the sahajiyas, I have written a book called Prabandha Pancakam, Five Essential Essays. Try to read it very carefully and with firm faith, so that you can defeat all the arguments that these persons are now giving.

Demons come from time to time, and they try to establish that Srimad-Bhagavatam and Bhagavad-Gita are nonsense. They say, "Krsna was a very lusty person." They think that the Krsna of Mahabharata is somewhat better and more authentic than Nanda-nandana, and Yasoda-nandana. They especially say that Krsna's rasa dancing is very bogus. They say, "Srimad-Bhagavatam is not a very authentic book. It is like mythology, and recently written by someone other than Vyasa." Such persons are like Ravana, like Kamsa, Jarasandha, and others; and that is why my siksa-guru, Srila Swami Maharaja, told me, "You must come; otherwise the devotees will be weak and they will not realize the truths of Krsna consciousness. It is for this reason that I am coming and preaching in this old age to fulfill the mission of Srila Bhaktivedanta Swami Maharaja, which is the mission of my guru-varga.

So try to be very strong. Read the books of your Prabhupada, and also my books. My books will give you further strength to defeat all the arguments against him. Don't be weak.

Lady devotees should also be very strong to preach this mission, and at the same time they should try to maintain their lives. They should be like Srila Swami Maharaja's lady devotees, who, although very young girls, preached his mission everywhere.

[Srila Maharaja was presented the newly published Harmonist magazine and then commented:] The magazine, Rays of the Harmonist, has now come, and it is so good. It contains very, very good essays and articles by Srila Bhaktivinoda Thakura, Srila Bhaktisiddhanta Sarasvati Gosvami, paramapujyapada Srila Sridhara Maharaja, Srila Swami Maharaja, my Gurudeva, Srila Bhakti Pramoda Puri Maharaja, and so on. These articles contain many important topics. Try, therefore, to distribute this magazine. I request Rama-Vijaya prabhu to organize the distribution. Devotees should read them, and they should also distribute them.

I have now been preaching for a long time, without taking time for writing. I have been preaching in Western countries and Russia , and in Jagannatha Puri and Vraja Mandala Parikramas, and therefore I could not translate any books. I want to give you the very best books, like Ujjvala Nilamani, Bhakti-rasamrta-sindhu, Bramha-samhita, Bhajana- Rahasya of Srila Bhaktivinoda Thakura, and so many others. I require some time to do this. Srila Swami Maharaja used to go to Hawaii to write, for so many months at a time, day and night. It may be, therefore, that sometimes I will not be able to come give the morning class. There are so many qualified devotees here who can give class, like Krsna Bhajana prabhu, Dhrstadyumna prabhu, Sripad Asrama Maharaja, Rama Sraddha prabhu, Vrndavana Vilasini, and so many others. I will surely come to give the evening class, and sometimes I may come in the morning, to inspire you - but I also would like some time to write.

You should make a schedule of who will speak when, and I may also come for some minutes. Each evening I will be here from 5.30 to 7 o'clock, just after kirtana, but I think it will be good if I also write something. I will especially write when I go to Hawaii, as Srila Swami Maharaja used to write.