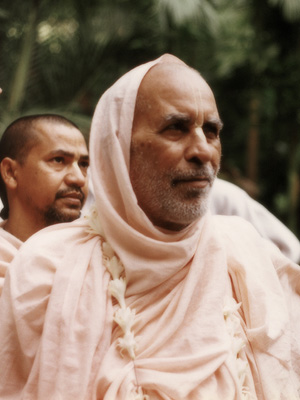 [The following was taken from notes written during Srila Maharaja's talk, spoken partly in English and partly in Hindi. A close relative of the devotee hosting Maharaja came for darsana. Srila Maharaja joked with him and told him not to come to his darsanas or classes, because he would then give up his home and family, and take sannyasa. Then he said:]

Here in New Zealand we'll give tattva with the help of sweet pastimes, and thus very easily they will understand. It will be like the kindergarten system. The pastimes of Krishna are so powerful that even a spiritually blind person will become like the great personalities of the past and take sannyasa.

In 1933, Srila Bhaktivedanta Swami Maharaja took initiation. He was doing his business, managing a chemical company, but he was also reading Srimad Bhagavatam. While reading he saw a sloka:

"The Personality of Godhead said, 'If I especially favor someone, I gradually deprive him of his wealth. Then the relatives and friends of such a poverty-stricken man abandon him. In this way he suffers one distress after another'."

Srila Swami Maharaja told me when he took sannyasa, "I remember the days just after Srila Pradhupada gave me initiation; I chanted with taste and eagerness. Then I saw a sloka: 'If anyone remembers me from the core of his heart, I take away all his possessions, home, and family, and make him a street beggar.'" Still, I had so much taste for chanting, and I continued. After some time my wife left me and my three sons also left. They called me a 'bogus father,' and they left he who had been working so hard for them. Then, when my medical company failed, I made a big shop, and even the prime minister used to come there. Unfortunately that also failed, but still I did not give up. I became my own medical representative. I made my own medicine and brought it to the other shopkeepers. But that also failed. Now I have come to you penniless. I have not one paisa."

I therefore requested Srila Swami Maharaja, "Come to Keshavji Gaudiya Matha. We'll serve you. You are the very dear friend of my Gurudeva, so there is no need of taking his permission." Soon my Gurudeva came and also requested him, "You are so qualified. You should take sannyasa and be jagad guru and preach all over the world."

So this hari-katha is very powerful. However, if there is vaisnava-aparadha, there will be no fruit. We should be careful about these offences.

Once, there was an argument between the co-wives of Kasyapa Muni. Their names were Kadru and Vinata. Vinata said, "The sun has a human form. That sun-god sits on a chariot and that chariot is pulled by white horses with shining white tails." The queens were at that time not seeing the chariot clearly. Kadru knew that the horses tails were white, but just to be contradictory she said they were black. Kadru told Vinata "If I am right, then you will have to become my maidservant, and if you are right, then I'll become your maidservant." The two co-wives then arranged to see the chariot better, when the sun would be more clearly visible.

Kadru was the mother of snakes. She told her sons, who were black cobras, "I do not want to be a maidservant. Go to the horses before sunrise, and cover their tails with your bodies so that I do not lose." Her sons flew into the sky and covered the tails. When Kadru and Vinata later saw the horses, the tails were black, and Vinata was bound to become the maidservant of Kadru.

At that time Vinata was pregnant and she later gave birth to Garuda. When he was somewhat grown, Garuda realized that his mother was a maidservant, and he wept. He inquired from her how she had become so, and asked if there was a way for her to be freed. Vinata told her son how she had lost a bet, and her freedom would come only if she would give Kadru a kalasha, jar, of heavenly nectar.

That nectar was kept by Indra in Svargaloka, heaven, under lock and key. Garuda easily flew to Svarga and defeated the demigods. Taking the pot of nectar he returned to his home and gave it to his mother, who was then freed. On the way home he had stopped in four places to rest -- Vrindavana, Prayaga, Hardwara, and Ujjain. When he sat at each of these places, the air there was touched by the nectar, and some nectar also seeped through the clay pot. One of those places was Vrindavana. That is why, when the Kaliya serpent 'killed' everyone in Vrindavana by his poison, one tree remained alive -- the tree upon which Garuda had sat.

But what is the real nectar? Garuda is an eternal servant of Lord Narayana. His heart is a pot of nectar because he keeps the pastimes of Narayana there. Thus, when he sat at those places he spoke hari-katha to the sages assembled there, like Narada and the four Kumaras. This is nectar.

Nowadays pilgrims only go to the Ganges to take bath, and if she is merciful, in thousands of years she may give some purity. On the other hand, sadhu-sanga will give immediate results. By the association of Svarga your lust, problems, and pride will be increased, and you'll be lost in false ego. However, by a high class of association, hari-katha can give even the association of Radha-Krishna Conjugal. We cannot calculate how high this is.

It is said in sastra that you will be liberated by taking bath in Kumba Mela, but this is said just to attract general people so that they may meet sadhus like Narada Muni. Moreover, I know that what I'm telling you, you will not hear from any other sadhu.

One of the places at which Garuda dropped nectar was Prayaga. Every twelve years, during a certain constellation, many sadhus come there and hold a mela, festival, giving talks about spiritual subjects. The Sanskrit word for clay pot is kumba, and therefore the mela is called Kumba Mela. The fruits of taking bath at Kumba Mela cannot be compared to an atom of the benefit achieved by being in Vrindavana.

Once there was a great Kumba Mela in Prayaga. Devotees, tapasvis, jnanis, and yogis were all there. All the tirthas also came there to give presentations to Tirtharaja Prayaga. At that time Narada came and spoke to Tirtharaja. He asked, "Are you Tirtharaja, the king or greatest of all tirthas (holy places)? Is this the truth?" Tirtharaja answered, "Yes." Narada said, "I don't believe you. All the tirthas are here to present upahara, gifts, to you, but do you see here a single tirtha of Vrindavana?" Tirtharaja looked here and there, and he could not find any tirtha from Vrindavana. Even the smallest tirtha had not come to honor him.

Narada then said, "So how are you Tirtharaja?"

Tirthraja then went to Lord Narayana in Vaikuntha. When present before the Lord, he asked, "Why did You give me this title of Tirtharaja. I am not Tirtharaja."

Narayana replied, "Who has told you this?"

"Oh, don't believe him, he is a troublemaker. He is trying to trick you Don't listen to him."

"But his facts were true. There at Prayaga he showed me that all of the tirthas had come to honor me, but not a single tirtha of the Chorasi (84 square miles) in Vrindavana was present."

"He has tricked you. Vrindavana is not a tirtha. Vrindavana is my heart. It is Myself. How can I give my heart to you? So really you are Tirtharaja."

You cannot imagine how those in Vrindavana can control Krishna. Those who can follow the palya-dasis of Srimati Radhika will never go to Prayaga. By hearing Narayana's pastimes and bathing in Prayaga, you can only get salvation and the fruits of your desires. The highest attainment you can receive is the service of Narayana. But even a mosquito or a dog of Vrindavana will not want to be a servant of Narayana. They will even reject being like Hanuman. They don't even want to be like Rukmini and Satyabhama. They don't even want to be like the friends of Krishna who can sleep on the same bed as Him and embrace Him. Krishna sometimes takes them on His shoulders and He takes their prasada remnants in His mouth. But these palya-dasis won't even take this friendship, nor even the parental love of Mother Yasoda and Nanda Baba. They only want to be palya-dasis of Radhika, nothing else. If Srimati Radhika is angry at Krishna, they will offer namaskara to Krishna by saying, "O You black cheater." Garuda and Narada cannot do this. So why should these high-class devotees give up Vrindavana? They will never go out of Vrindavana, and wherever they live is Vrindavana.

I have not read astrology. I only know what I've heard from my Gurudeva. Srila Prabhupada Bhaktisiddhanta Sarasvati was the greatest astrologer of his time. One university had an honored chair of astrology, and they invited Srila Pradhupada to come and sit in that chair. But he never cared for this position.

Though they (some of the Iskcon leaders) regard me, they fear that I'll take a way their disciples. They don't know that I have not come for that. Besides that, their disciples are not their property.