The Meaning Of Diksa 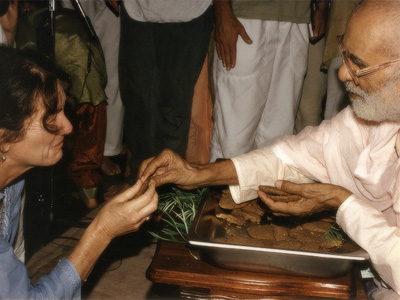 [Srila Narayana Maharaja:] If all material enjoyment is coming but the soul is not happy, what does this mean? It means that the person cannot be happy. Never. This association is for the soul's happiness.

Always try to honor all, even those who are criticizing me. Don't care, because they are all like my children. I have promised Srila Svami Maharaja that I would help them.

Even if they will do like this. [Srila Narayana Maharaja moved his arm as though he were hitting himself] no harm. They can even pass stool and urine on me; still, don't try to quarrel.

[Brajanatha dasa:] I heard that someone recently said that the biggest mistake the GBC made was to ban Srila Narayana Maharaja.

[Srila Narayana Maharaja:] Yes. I told them, "This will the biggest problem for you. Because of that I will have to travel here and there. No one will be able to bind me. However, if you are on friendly terms, then, oh, I will be like a lion sleeping."

[Dhrstadyumna dasa:] Then you will be under the control of the GBC.

[Srila Narayana Maharaja:] Yes, they will be able to control by love and affection. Without this no one will be able. Srila Svami Maharaja controlled me so much by love and affection, and I am still under his control. No one else can control me. Even Krishna can never control me, because I am already under the control of Srimati Radhika. Radhika is so powerful. If Krishna will be angry upon me, I will say, "Why are You angry? You should not be angry. My Svamini is Radhika, you know." Then Krishna will say, "Oh, your Svamini is Radhika. Then, namaskara to you."

[Krishna Bhajana dasa:] Gurudeva, many devotees who we are speaking to think that Gaudiya Matha and yourself are different from Srila Prabhupada.

[Srila Narayana Maharaja:] If they think that way, it means that they think Srila Svami Maharaja was not following Srila Rupa Gosvami, Srila Sanatana Gosvami, Sri Caitanya Mahaprabhu, Sri Narada Gosvami, Srila Bhaktivinoda Thakura, Srila Prabhupada Bhaktisiddhanta Sarasvati and all others like them. Because I am in their line, I must be in the line of Srila Svami Maharaja. No one has any right to say otherwise. If my Gurudeva tells me, "Oh, you are my transcendental disciple," and I am accepting that he is my transcendental Guru, then even if the whole world is not accepting this, what is the harm? There is no harm.

Srila Bhaktivedanta Svami Prabhupada has told me that, "Our relationship is transcendental, and because of this you should give my samadhi and help my devotees." And I am also accepting him as my siksa-guru. Therefore, even if everyone in the whole world does not accept this, it means they are foolish. They are not obeying their Gurudeva. They are outside of their Gurudeva's control, and they are therefore guru-druhi [against one's guru]. Why are they not accepting this?

So I am not disturbed. Whether they are speaking favorably or unfavorably. I am the same. My relationship with him is the same. I should obey him.

They have only been connected with Srila Svami Maharaja for some days. I have been connected for a long time-from 1946 up till now. Only by his mercy I am going here and there-and so many are accepting me.

[Dhrstadyumna dasa:] I was recently with an old friend, and after we performed gurupuja to Prabhupada's murti I said, "If Prabhupada was physically present-we know that he is accepting out pranamas, our kirtanas, our offerings of flowers, and we are accepting that he is there-but for a moment if he was now physically here in this temple and he saw me and said, 'Oh, Dhrstadyumna, where have you come from?' If I say, 'I am with Srila Narayana Maharaja,' what would Prabhupada do? He would say, 'O my Narayana Maharaja, he should immediately come to my temple.' Wouldn't he? He had to admit, 'Yes.'"

[Dhrstadyumna dasa:] But you can't go yet. Krishna called Prabhupada too soon. We were still babies. We were not ready yet.

[Srila Narayana Maharaja:] This is natural. If Krishna and Radhika are coming here from Goloka Vrindavana to shower mercy, why will Prabhupada not come to me? Anywhere he may be, he will definitely come. I have this very strong faith. I have served him so much. ISKCON leaders cannot serve him in this way.

[Devotee:] What is the relationship between diksa and siksa, and what is reinitiation?

[Srila Narayana Maharaja:] The word initiation actually has come from the word diksa. A qualified, realized guru, who is detached from worldly things-he is really guru. Because he has some realization, he can give diksa. But diksa is not completed in one day or one moment, as it is going on nowadays. Diksa is a class, a course - a process. In one day we cannot be BA, MA, or PHD. It will take some time. There is a regular process.

[Devotee:] What is our relationship with Krishna?

[Srila Narayana Maharaja:] This lady is your wife? What is the proof? [devotees point to their son] Okay, but if she leaves you for another, with her child, then what is the proof? Is there any proof?

[Devotee:] We have a certificate.

[Srila Narayana Maharaja:] As she is your wife-you have accepted, she has accepted, and your whole group is accepting this-similarly you will realize a thick relationship with Krishna: "I am Krishna's eternal servant." One will receive a very thick transcendental relationship with Krishna by that process. I am an eternal servant; but what kind of servant? Mother Yasoda is a servant, Nanda Baba is a servant, Upananda is a servant, Baladeva is a servant, Krishna's friends are servants, all the gopis are servants, and Radhika is also a servant of Krishna. Mother Yasoda is a servant, but in what way? Mother. Krishna takes the foot-dust of Nanda Baba and Yasoda. This is their service. As for Srimati Radhika and all the gopis, they are most beloved. So any relation will come, as friend, or father, or mother. You will realize everything, and naturally attachment will come. This is first thing-divya-jnana.

Then, second is ksa. As you will enter this process, all kinds of unwanted things, namely nama-aparadha, vaisnava-aparadha, attachment to this world, intoxication and sense gratification, will all truly go. This process is the real meaning of diksa. If you have received diksa but no relationship, and all your unwanted things are still in your heart, this is not really diksa. Even if you have performed a fire sacrifice or heard the mantras, there will be no effect. The real process is to accept the shelter of those who can give these powerful things. The process begins from sraddha (faith) and comes to the mood of rati (bhava- bhakti). You'll realize what is rati. You will always be thinking, "Krishna-Radhika." At that time, even if you want to give up such remembrance, you will not be able to. Guru gives this-even if he has not given any mantra-and this is called diksa. Srila Sukadeva Gosvami never gave any mantra to Maharaja Pariksit. But what did Maharaja Pariksit achieve? He received the service of the gopis, and he became attached to that service. And what did he tell to his mother? Do you know his mother? Uttara. Maharaja Pariksit told her, "You are my mother, but now I am dying, and at this last moment I am giving you this instruction. Don't see Krishna as your father-in-law. What should you think? He is your beloved, as He was the beloved of the gopis. Krishna is also your beloved and He is also my beloved. Always keep this in your mind." This statement proves that Maharaja Pariksit was connected with Krishna only through Sukadeva Gosvami. Therefore, Sukadeva Gosvami is actually his diksa guru.

Sometimes the siksa-guru is much higher than the diksa-guru. Much, much higher. Do you know who was the diksa-guru of Srila Raghunatha dasa Gosvami? Yadunandana Acarya. But Srila Rupa Gosvami and Srila Svarupa Damodara were much more qualified than him. Srila Raghunatha dasa Gosvami accepted them as siksa-gurus, and therefore his siksa-gurus were more powerful than his diksa-guru. He offers pranamas (obeisances) to Yadunandana Acarya, but he is much more obliged to Sri Svarupa Damodara, Sri Raya Ramananda, Sri Rupa Gosvami, and Sri Sanatana Gosvami. What has he prayed to Sanatana Gosvami? "Vairagya-yuga bhakti-rasam prayatnair. I was unwilling to drink the nectar of bhakti-rasa enriched with renunciation, but by his causeless mercy Sri Sanatana Gosvami induced me to do so." Srila Raghunatha dasa Gosvami has not prayed like this to Yadunandana Acarya. And he has prayed still more than this to Sri Rupa Gosvami: "Sri rupa manjari karacit pada-padma. O golden girl! When you are lying on the lap of the prince on Vraja with your feet on the lap of Rupa Manjari, and she is massaging your feet. Will she, by the corners of her eyes, give me her maha-prasada seva of gently messaging Your feet? She will message one foot and I will message the other." The prayers in his Vilapa Kusmanjali are all in relation to Srila Rupa Gosvami.

You should try to hear all these things and develop your Krishna consciousness. This is the aim and object of life.

Suppose someone is abusing your guru and says, "Your gurudeva is a bogus person. All his siddhantas are bogus." What will you do? If anyone says, "Your guru is a very bogus person. He does not know anything, and he does this and that. He always takes wine. Your gurudeva is always absorbed in sense gratification and does not obey his gurudeva. He left his gurudeva." What you will do? What you will do? You don't know? Will you hear more and more? Will this add to your bhakti? Or, should you cut all his arguments? You should tell me. If you cannot tell, then you are not a real disciple. You should cut all the arguments, and if someone else is helping to cut all the arguments, you should accept their words. Then I will be happy.