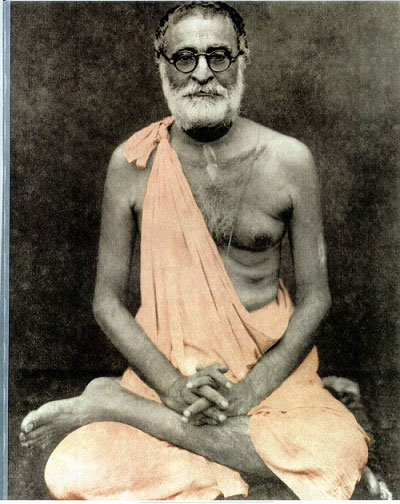 This is the appearance day of jagad-guru Srila Bhaktisiddanta Sarasvati Thakura, and therefore we are discussing his glories.

In this pranama mantra it is stated: bhaktisiddhanta sarasvati. Srila Bhaktisiddhanta Sarasvati Thakura, the embodiment of bhakti-siddhanta, the personification of the conclusive doctrines of bhakti, manifested as the son of Srila Bhaktivinoda Thakura. In Bhaktisiddanta Sarasvati Thakura there is all the knowledge that Krsna gave to Brahma, Brahma gave to Narada, Narada gave to Vyasa, and thus, by disciplic succession, came through the Rupanuga Vaisnavas down to Srila Bhaktivinoda Thakura and Srila Gaurakisora dasa Babaji Maharaja. All the siddhantas, philosophical truths, of the Vedas, Upanisads, and all other scriptures, are embodied in Srila Bhaktisiddhanta Sarasvati Gosvami Thakura. If any person came to argue philosophy with him, that person was at once defeated and was bound to accept his teachings.

Thus, he has two forms. One form is as Caitanya Mahaprabhu's associate, not only in this world but also in Goloka Vrindavana, in Svetadvipa. And, in Vrndavana also, as Nayana-manjari, she serves Srimati Radhika. You have seen in Srila Raghunatha dasa Gosvami's Vilapa-kusumanjali how the manjaris serve Radha-Krsna Conjugal. Nayana-manjari serves Them in those same ways.

Srila Sarasvati Thakura is krpabdhaye, an endless ocean of mercy. He is the first acarya in the four sampradayas to desire that all the people in the world, all those who have forgotten Krsna, should realize all the truths of bhakti, and they should be helped to become pure devotees. If Srila Prabhupada Bhaktisiddhanta Sarasvati Gosvami Thakura had not sent his disciples here and there, none of you, in any country, would have met pure devotees. Now, by the mercy of Srila Bhaktisiddhanta Sarasvati Gosvami, through Srila Bhaktivedanta Svami Maharaja and my Gurudeva, krsna-kirtana is everywhere in the world. Everyone knows Caitanya Mahaprabhu and Radha and Krsna only by their mercy. Srila Prabhupada had the wish, and then sent his arms here and there. Who are his arms? His disciples, his devotees. They are like arms, and they are preaching everywhere.

We are very fortunate to come in their line, but we should try to be very strong. Sometimes, if you are not in good association, you become weak. It may be that when I return to India, you will become weak. Don't be weak. Always realize that our whole guru-parampara, Radha-Krsna, Mahaprabhu, Nityananda Prabhu, and guru are always with you, and they will help you. Don't give up chanting and remembering Krsna.

Krpabhdaye. He is not called an ocean of mercy only because he gave us harinama. He gave so much more. He brought Goloka Vrndavana. He brought the love and affection of the gopis to this world. If he had not brought all these things, we would never have heard of them. He is therefore an ocean of mercy.

Srila Bhaktisiddhanta Sarasvati Thakura taught that there are five kinds of knowledge: pratyeksa, paroksa, aparoksa, adhoksaja, and aprakrta. The knowledge of everything we see and realize by our direct experience is called pratyeksa. But this is false.

Then, paroksa. We don't see Svarga, but we believe in it. There is also a history of Svarga. We accept Svarga, although we don't see it. We hear that if a man is a thief, a dacoit, a debauch, and so on, he will have to go to naraka, hell. On the other hand, if he is pious, he will go to Svarga and there he will be very happy. This knowledge is called paroksa.

Then, aparoksa. This is the knowledge taught by Sankarcarya. One day we will have to die, and we will have to give up everything in this world. Our beauty will go, our body will go, whatever we are collecting will go, and everything else will go. We cannot take anything, neither our pennies nor our pens, from this world. So why are we collecting all these bogus things? Why? An intelligent person thinks about this and becomes detached, but a bogus, foolish person remains attached to sense gratification. He desires only to make his body very beautiful and strong. Nowadays there is a competition for Miss India, Miss America, Miss World, and also Miss Universe. After one year, will Miss India again be selected as Miss India or Miss World? Rather, all will neglect her.

Although engaged in chanting and remembering, many devotees are also engaged in sense gratification, and they cannot give up lust. This is Maya. Therefore, Prabhupada Bhaktisiddhanta Sarasvati Thakura sent his qualified devotees everywhere, to make those weak devotees strong. He wanted to encourage them and say, "You should remember Krsna." It is for this reason that he has sent his arms. I am also coming. He has ordered me to do so. His disciple, Srila Bhakti Prajnana Kesava Gosvami Maharaja, has ordered me. My Svamiji Srila Bhaktivedanta Svami Maharaja has ordered me. So you should not be weak – never and never.

Then, adhoksaja. What is adhoksaja? Adhoksaja is Vaikuntha, that place where there is no kala, time. There is only the eternal present. There is no birth and death, and no suffering and sorrow. Nothing bad is there. In that abode there is so much opulence, and everyone there prays to Narayana.

There is something higher than this, however. Srila Bhaktisiddhanta Sarasvati Thakura has taught that this most superior truth is called aprakrta. Aprakrta is that realm where Vraja-lila is performed. Krsna is sometimes like a baby there. There He is controlled by His father and mother, He is controlled by His beloved gopis, and He is controlled by His friends. No one can ever imagine such very, very sweet pastimes. We should try to know this aprakrta. We should try to serve this aprakrta Krsna who is with so many gopis, with His father and mother, with His sakhas, and with all His cows and very sweet cowherding pastimes. This is the aim and object of our life: service to this Krsna. This is aprakrta-jnana.

Krsna sambandha-vijnana dayine prabhave namah. In this world we have a relationship with our father and mother and our immediate family. We think, "She is my mother, he is my father, and he is my brother." But we are not satisfied with that. We want to be a husband or wife, girlfriend or boyfriend, but still we are not satisfied.

Madhuryojjvala premadya sri rupanuga bahaktida. He explained all these truths. He actually came only to give this madhuryojjvala-prema, this gopi-prema, which Srila Rupa Goswami has written about in his books and which Caitanya Mahaprabhu came to this world only to give – the relationship of Krsna as our beloved. He came only to give this and nothing else. Srila Prabhupada has written in his articles: "I came only to give this, but my whole time was spent in cutting jungles." Srila Bhaktivedanta Svami Maharaja also did this in Western countries. He came to this world to give love and affection for Krsna, but to whom could he give it? He was preaching to unqualified people, and therefore he wanted to make a platform for this love, by cutting the jungles of atheist and mayavada misconceptions. He thus fertilized the field by ploughing and cutting jungles, and most of his time went into this. He could not preach as he wanted, but he stored so many deep truths about gopi-prema in his books. 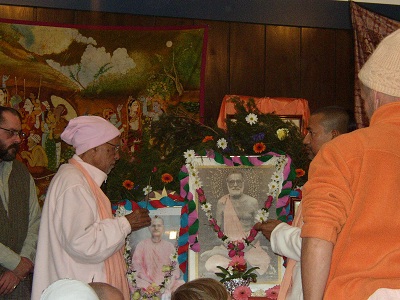 Prabhupada Bhaktisiddhanta Sarasvati Thakura also did this. In Radha kunda, in his last days, he said that if anyone is only cutting jungles, cutting the arguments of mayavadis and so on, and not accepting the mood of the gopis as taught by Rupa Gosvami, not doing worship of Radha-Krsna Conjugal, not following the line of Rupa Gosvami, then even their chanting will not be sufficient to help them. After some time they will become weak and give up all devotional practices. Then they will become nirvisesavadis and mayavadis, as so many are now becoming.

Sri rupanuga bhaktida. Srila Prabhupada descended to this world, and all our disciplic acaryas also came, only for preaching this rupanuga Vaisnavism. But they had no time. From the beginning, therefore, I was very alert to avoid cutting jungles because our guru varga had already cut them down. I considered that I must do something affirmative. I therefore accepted this and I preached it from the beginning. Now, however, coming to the Western countries, I began to think, "To whom shall I tell?" Now I also have to cut down some jungles. When I am in Vrndavana or Navadvipa, however, I mainly speak about the high class of sweet pastimes of Caitanya Mahaprabhu and Radha and Krsna.