The Blazing Forest Fire And The Burning Ghata 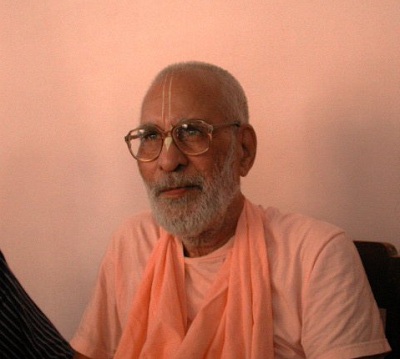 One day, when Krsna was out cow-herding with His billions of cowherd friends and innumerable cows, He took them to Bhandiravana, one of twelve prominent forests of Vrndavana. Roaming from one forest to another, He and His associated finally reached Bhandirvana and began to play. Balarama and Krsna and all their friends, like Dama, Sudama, Sridama, Vasudama, Lavanga, Stoka-krsna and so many others were totally absorbed in their sports.

Although Krsna is the Supreme Personality of Godhead, whose manifestation of the manifestation of the manifestation created this world, Krsna Himself has nothing to do with this creation. He simply wished, and everything came about. Although He is the Supreme, He is always playing in Vrndavana, performing His sweet pastimes with the gopalas (cowherd boys), the gopis, Mother Yasoda, Nanda Baba, and other associates. Due to awe and reverence for Him the wind blows, Brahma does the work of creation, Siva destroys these worlds, Durga acts as the jail-warden of the material world, and all the other demigods perform their universal functions. Never think that He was weak or ignorant, or that He was an ordinary boy playing with his cowherd friends.

Krsna was fully absorbed, playing with Balarama, Sridama, Subala, and all other friends. In fact, they were so absorbed that the grazing cows were left unsupervised and became independent. Krsna always used to watch them, and their faces were always directly in front of Him. They were never behind. But on this particular day it was different. As the cows were grazing, they began to see very beautiful green grass ahead of them. Attracted by the very green grasslands in the far distance they quickly ran there, passing all the other grasslands.

In the meantime, while Krsna was playing with the cowherd boys, they heard the cows weeping loudly. Not knowing where their cows had gone, the boys became very worried, thinking, "These cows are our only wealth. Without them, how will we be able to show our faces to our fathers and mothers?" Without consulting Krsna and Baladeva, the boys began to search for the cows. By seeing the cows' footprints and grazed grasses, they discovered the way and gradually reached the cows.

There were three types of cows: those who have not given birth to any calves, those who have given birth, and black cows. The friends of Krsna reached all those cows. Both the cows and boys were feeling very hot, burning sensations. Somehow fire had appeared on that hot summer day, and in a moment it spread everywhere. The whole forest of long, dry grass then began to burn with high flames.

When the boys and cows were just about to die, they called out, "O Baladeva! O Krsna! You are powerful. Save us. Save us. Save us. We are going to die." As soon as they called Krsna and Balarama, the two brothers at once appeared there. Krsna said to them, "Don't fear, don't fear. I am here now. All of you please close your eyes." 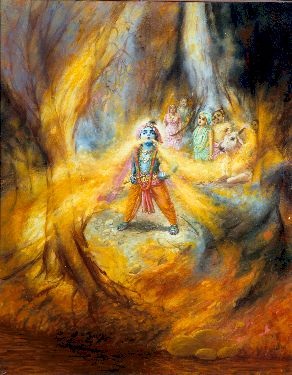 Why did Krsna ask them to close their eyes? He remembered how He had eaten clay at Brahmanda Ghata, and how the boys had complained to His mother and she had ordered Him to show her what was in His mouth. He decided to tell the boys to close their eyes so that they would not see Him eat the fire and complain again. He also thought that the boys may give up their lives if they saw Him swallowing fire. So He told them to close their eyes, and then He swallowed the whole forest fire. A moment later he told them, "Now everything is done. You can open your eyes."

What did the boys see? They found themselves where they had been playing earlier under the shade of the banyan tree on the bank of the Yamuna, and the atmosphere was very cool. All the cows were peacefully sitting there and chewing. They all practically forgot what had happened, and wondered if they had all been in a dream.

This pastime actually took place, and it also has a deep symbolic meaning. Go, means both cows and senses. Krsna is the master of the senses. If you engage all your senses in serving Krsna, you are happy. If you forget Krsna and engage your senses in their own gratification, you will never be happy. This world is made only of problems. According to the activities of your past lives, you have certain impressions on your hearts, and due to those impressions you have this body and its predestined pleasures and pains. Because of this body you will have to grow old and face many other calamities. Although there are so many problems, still you imagine that you are happy.

One day you will have to die, at which time your friends and relatives will take you to the burning ghata. They will set your body ablaze, and it will burn to ashes; this will certainly take place. Then, when you take your next birth, you will again go through the same thing. Since time immemorial you have been taking birth and dying, over and over again, like an endless chain, If you do not engage your senses, your body, your mind, and your tongue in Krsna consciousness, this will continue.

By His causeless mercy, Krsna gave us these human bodies – only to serve Him and to chant and remember Him. We are engaging all things for our sense gratification, however, and that is the problem of life. When you die, you will be forced to give up your husband, children, position, wealth, and even your body. So why not chant and remember Krsna? If you are chanting and remembering, you will see that you have crossed beyond the endless chain of birth, death, and all material universes. You will see that you are in Goloka Vrndavana, serving Krsna happily like the gopas and gopis. You will see that you had been dreaming; that you did not actually go to this world.

In the evening, Krsna called all His cows by playing His flute. Dhavali, Syamali Tungi, Kalindi, and all the other cows assembled, and Krsna took them home to Vraja. When the elder gopis saw their children coming, Yasoda and all the other mothers took Krsna in their laps, totally absorbed. Whenever they met with Krsna, one hundred thousand years would become like a moment; and without Krsna, a moment would be like millions of yugas in separation.

The gopis had great attraction for Krsna. When they were at home, they always thought of Him. When they were sweeping or performing their other duties, they sang, "Govinda Damodara, Madhaveti." As they cleaned their houses, they remembered His very sweet and powerful pastimes. Their minds were not empty, nor were they thinking of worldly things. When they placed their children on swinging baby beds, they didn't tell them, "Go to sleep." Rather, they sang, "Govinda Damodara Madhaveti." They churned butter, not for their families but for Krsna, and they always remembered Him and pondered His beauty. Thus absorbed in His sweet pastimes, they would churn and sing, "Govinda, Damodara, Madhaveti."

Why can't we do this? If you do this, you will be happy in this life and also in your next lives, surely. If this were not true, then Srimad Bhagavatam, Bhagavad-gita, the Vedas, and the Upanisads would be false.

If you don't spend your money for Krsna's service, your sons and daughters and their future generations will drink liquor and engage in sense gratification with that wealth. Better to use your wealth for Krsna consciousness; for your own soul and the souls of your descendents. Sometimes you can call other devotees to come and do krsna-kirtana together: "Hare Krsna Hare Krsna Krsna Krsna Hare Hare, Hare Rama Hare Rama Rama Rama Hare Hare."

If you want to be happy forever, then follow this very easy method. Don't take drugs, meat, or wine. Only eat what you can offer to Krsna. Chant and remember Krsna and maintain your family. You will be happy forever. This is guaranteed. There is no other way except this.