The One Real Entity 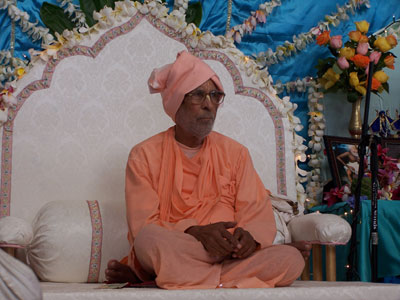 In Srila Narayana Maharaja's class, he is explaining one of the conversations between this sincere disciple and his self-realized guru. Sannyasi Thakura is asking about the nature of the soul and Reality. In his answer, Paramahamsa Babaji is explaining some important Sanskrit terms from the ancient Vedic literature.

Paramahamsa Babaji is answering the question of Sannyasi Thakura regarding the meaning of vastu. What is written in Jaiva-dharma about this?

[Devotee reads from Jaiva Dharma:] Sannyasi Thakura asked his Gurudeva, "What is vastu?"

Paramahamsa Babaji Maharaja said, "The Sanskrit word for ‘object' (vastu) is derived from the verbal root meaning ‘to exist' or ‘to dwell'. By adding a suffix, this root is made into a noun. Vastu therefore means ‘what has existence' or ‘what is self-evident'.

"There are two types of vastu: vastava and avastava. The term 'truly abiding substance' (vastava-vastu) refers to that which is grounded in transcendence. Temporary objects (avastava-vastu) are dravya (tangible objects), guna (qualities), and so on. Real objects have eternal existence. Unreal objects only have a semblance of existence, which appear real, although they are not."

[Srila Narayana Maharaja:] Here is an example: Krsna is truly vastu, the one real Entity. This microphone stand is also vastu, because it exists, but it is avastava-vastu, a temporary object. Krsna, maya (Krsna's deluding energy), and the jiva are all vastava-vastu. They exist eternally. 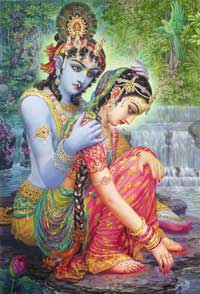 The unique qualities of Lord Krsna are ever fresh and new. If anyone sees Krsna, he or she thinks, "Oh, I have never seen Him before." Especially Srimati Radhika, who is with Him throughout the day, will see Him and exclaim with wonder, "Who is He?" Radhika's dear friend Lalita will reply, "You don't know? You have just been sitting on the lap of that very person - that tricky person!" Radhika will retort, "No, I have never seen this person before. How beautiful He is!"

Once Padma, the sakhi (cowherd girlfriend) of Candravali, came to Lalita and Visakha to glorify Candravali. She said, "Oh, my sakhi is so fortunate. Today she saw the beauty of the whole form of Krsna, top to bottom." Lalita then said, "I'm very sorry to say that my sakhi is not so fortunate. If She sees Krsna's nose, She cannot move Her sight from there. If She is looking at His cheeks, then She becomes fixed on His cheeks. My sakhi has never seen Krsna fully." Padma then became ashamed, as the consciousness of Srimati Radhika is more glorious than that of Candravali.

Unlike Lord Krsna and the spirit souls, everything in this world is constantly changing. Temporary objects last only momentarily and are ultimately unreal. They are called vastu, because they are manifestations of maya, which is vastu, but they are avastava-vastu.

What is maya? Lord Krsna's transcendental creative power is called Yogamaya. She is real, and she has two aspects: Yogamaya and Mahamaya. Mahamaya, or maya, is the shadow of Yogamaya who manifests and manages this world. Regarding Yogamaya, she personally manages Lord Krsna's eternal abodes - Goloka Vrndavana and all others.

"Real objects have eternal existence. Unreal objects only have a semblance of existence; they sometimes exist and sometimes do not. It is said in Srimad-Bhagavatam (1.1.2): 'vedyaṁ vāstavam atra vastu śivadaṁ. Only a truly abiding substance, that which is related to the Supreme Absolut Truth and yields supreme auspiciousness, is worthy of being known.' "

[Srila Narayana Maharaja:] In this world everything seems to be real, but actually it is not. You can understand this from Srimad-Bhagavatam:

Completely rejecting all religious activities which are materially motivated, this Bhagavata Purana propounds the highest truth, which is understandable by those devotees who are fully pure in heart. The highest truth is reality distinguished from illusion for the welfare of all. Such truth uproots the threefold miseries. This beautiful Bhagavatam, compiled by the great sage Vyasadeva in his maturity, is sufficient in itself for God realization. What is the need of any other scripture? As soon as one attentively and submissively hears the message of Bhagavatam, by this culture of knowledge the Supreme Lord is established within his heart.

The transcendental vastu is one without a second, and that is Sri Krsna Himself. He is the non-dual Supreme Truth. Everything comes from Him; everything is an expansion of His spiritual energy (yogamaya) and material energy (maha-maya). His personal expansions or manifestations, like Lord Ramacandra and Lord Nrsimhadeva, are non-different from Him. This world also manifests from Krsna, for without Him nothing can exist. He is the advaya-jnana para-tattva, the supreme, transcendental one-without-a-second Absolute Truth. Whatever we read about and whatever we see are only expansions of His power or of His bodily manifestations. The word sivadam in this verse means "very auspicious." It is very auspicious if a person can know Sri Krsna.

[Devotee reads from Jaiva-Dharma:]
"Sri Bhagavan is the only real Entity (vastava-vastu). The living entity, jiva, is a distinct or individual part of that Entity, while maya, the potency that produces illusion, is the energy of that Entity. Therefore, the word vastu refers to three fundamental principles: Bhagavan (the Supreme Lord), the jiva, and maya. Knowledge of the mutual relationship between these three principles is known as pure knowledge. There are innumerable seemingly real representations of these principles, and they are all regarded as avastava vastu, The classification of phenomena into various categories such as tangible objects and qualities, which is undertaken by the Vaisesika school of philosophy, *[See endnote 1] is merely a deliberation on the nature of avastava-vastu, temporary objects. The special characteristic of any truly abiding substance is its factual nature."
[Srila Narayana Gosvami Maharaja:] The sum-total of material elements is called the maha-tattva, and this is the first covering of the jiva. This mahat-tattva manifests false ego in the three modes of nature: goodness, passion and ignorance. From these modes, material intelligence develops. From material intelligence comes the mind, which is always deliberating on what it considers good and bad, painful or pleasing, this or that. The living entity then develops a particular body, and that body consists of five gross elements - earth, water, fire, air and ether. This is all a manifestation of maya-sakti . We see so many things in this world, but really nothing is as it appears. All is but the magic of phantasmagoric maya.

The Eyes to See

Everything we see by these material eyes is avastava, temporary and ultimately unreal, whereas whatever we see with our soul is vastava, reality. We shall experience transcendental existence when our anarthas (unwanted habits and thoughts) disappear and real prema manifests. Then we can see things as they are. We can have some idea of that real world when we reach the preliminary stage of love of God. At this time, at the stage of bhava-bhakti, transcendental emotions arise in our hearts.

However, in order to actually perceive that transcendental realm, one's heart must be saturated with love, or prema. At that time we will see the Supreme Reality and be able to serve Him in our transcendental form.

We cannot see the form of Sri Krsna with these eyes. In certain special cases it is possible, as in the instance of Dhruva Maharaja. Sri Narada Rsi saw the form of Narayana for a moment. He had been sincerely engaged in devotional practices, and when he came to the stage where he could not live without Sri Krsna, the Lord's expansion as four-handed Lord Narayana appeared to him for a moment. He had been chanting, "Om namo bhagavate vasudevaya," *[See endnote 2] and therefore it was Narayana who appeared to him. Narada Muni saw that Supreme Lord for a moment, and then the Lord disappeared. He then began to weep bitterly, and an aerial voice of Narayana spoke to him, "In your present stage you will not be able to see Me continually. I mercifully gave darsana to you to increase your eagerness. Continue your bhajana, traveling throughout the universe, chanting My name, and singing about My glories. In this way, always be maddened, sometimes rolling on the ground, with tears flowing your eyes and with a melted heart. When Maya leaves you, and when the time comes for you to leave your body, you will automatically attain your transcendental form."

It is stated in Srimad-Bhagavatam (11.2.40): "By chanting the holy name of the Supreme Lord, one comes to the stage of love of Godhead. Then the devotee is fixed in his vow as an eternal servant of the Lord, and he gradually becomes very much attached to a particular name and form of the Lord. As his heart melts with ecstatic love, he laughs very loudly or cries or shouts. Sometimes he sings and dances like a madman, for he is indifferent to public opinion."

Later, when death came, Narada fearlessly placed his feet on the head of death and attained his transcendental form.

Wait for that stage when maya will leave you; then you will be able to see. Now your vision of Thakurji (the Deity form of the Lord) is called aropa-siddha-bhakti. *[See endnote 3] Now you may be thinking, "Oh, here is Thakurji. He can fulfill all my desires." With such consciousness, you may later reject that so-called worship and all other devotional practices. So wait for that stage, and then you will be able to have an actual vision of the Deity.

A Particle of Love

[Devotee reading:]
"The special characteristic of any truly abiding substance is its factual nature."

[Devotee reads from Jaiva Dharma:]
"The spirit soul is a real entity, and his eternal, constitutional identity is his true nature."

[Srila Narayana Maharaja:] That nature is love - love for Krsna, the love of the part for the whole. That love is the eternal religion of every soul in the universe, whether he is liberated or not.

[*Endnote 1:
Vaisesika philosophy is the teaching of Kanada Rsi and it is the oldest of the six classical philosophical systems. Vaisesika represents an analytical process TO decifer the material objects INto atomic formulas and thus arrive at permanent conclusions, which are not necessarily denying God as a person. It basically views the world as cosmologically atomistic and ontologically pluralistic.

[*Endnote 2:
Krsna is sometimes two-handed and sometime four-handed in Dvaraka as the son of Vasudeva. But here Vasudeva refers to Narayana. It simple means "All-pervading one."]

[*Endnote 3:
Aropa-siddha-bhakti means that the words "devotion to God" are superimposed upon an activity or consciousness that is not actually imbued with devotion.-ed]

[*Endnote 4:
On tatastha:
"All the qualities of the unalloyed soul are above the eightfold qualities such as egotism, etc., pertaining to Krsna's acit (inert material) potency. Hence the jiva potency. though very small in magnitude, is still superior to acit potency or Maya. This potency has another name, viz., tatastha or marginal potency, being located on the line demarcating the spheres of the spiritual and mundane potencies (Sri Brahma - samhita 5.21 purport)."

"When jivas, begotten of the marginal potency (tatastha-sakti), forget the service of Krsna, they are confined in the mundane prison house, the citadel of Durga. The wheel of karma is the instrument of punishment at this place (Sri Brahma - samhita 5.44 purport)."

"Just like in the seaside the shore, the beach, sometimes you see it is covered by water and sometimes it is land; similarly, when we are covered by maya, that is our jiva-bhuta stage, and when there is no more covering, that is brahma-bhuta stage (Bombay, March 30, 1971)."

"Tata means the beach. Sometimes the beach is covered with water, and sometimes it is land. That is called tatastha (New York, July 15, 1976 )."

"The marginal line between the material manifestation and the spiritual manifestation is the Viraja River, and beyond the Viraja, which is a transcendental current flowing from the perspiration of the body of the Lord, there is the three-fourths manifestation of God's creation (Srimad-Bhagavatam 2.9.10)."