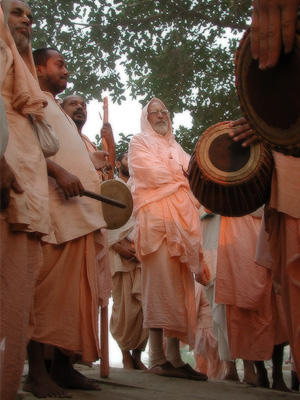 [The following is a glorification given by Srila Bhaktivedanta Narayana Gosvami Maharaja at the bhajana-kutira of Srila Bon Maharaja's Madana Mohana Ghera in Vrndavana:]

Today, on this holy occasion, so many learned scholars and saints of Vraja are gathered. I am neither a saint nor a learned person nor a speaker, but I am very glad to see that this scholarly assembly has honored our siksa-guru, Sri Srimad Bhakti Hrdoy Bon Maharaja, with their beautiful offerings to his lotus feet. I am also glad to have the darsana of these great personalities as well as the great opportunity to have heard from them. The learned persons here have described some of the glories of Srila Bon Maharaja in very ornamental language, and I want to say a few additional words in this regard.

What was his purpose in establishing a university in Vrndavana? Why did he preach Indian culture in the Western countries? If we give deep thought to these facts, we will find that he had so much inspiration in his heart to reveal to the world what Sri Caitanya Mahaprabhu wanted to give.

Who is Sri Caitanya Mahaprabhu? To fulfill His three desires that had remained unfulfilled in His own pastimes, Krsna took the internal mood and golden hue of Srimati Radhika and descended in the form of Sacinandana Sri Caitanya Mahaprabhu. He never opened any school, nor did He write any literature, nor did He establish any sampradaya. He only recited eight slokas, which are known as Sri Siksastakam, and He gave to the world the love of Sri Radhika, which includes the stages of sneha, mana, pranaya, raga, anuraga, bhava, mahabhava, modana, and at last madana.

No one else was able to give what Sri Caitanya Mahaprabhu has given by His causeless mercy. Mahaprabhu appeared once in this day of Brahma, and He presented this wonderful prema which even Krsna could not give. Actually, although Mahaprabhu relished it, the process to achieve this prema was given by Srila Rupa Gosvami.

What is the bhava that Sri Caitanya Mahaprabhu wanted to distribute, and what reasons did Rupa Gosvami establish as the causes of the appearance of Mahaprabhu? Rupa Gosvami established unnatojjvala-bhava as explained in the rasa-lila chapters of Srimad Bhagavatam. It would require hours to explain the meaning of unnatojjvala-bhava, but in brief I will say something through the following sloka:

["May the Supreme Lord who is known as the son of Srimati Saci-devi be transcendentally situated in the innermost chambers of your heart. Resplendent with the radiance of molten gold, He has appeared in the Age of Kali by His causeless mercy to bestow what no incarnation has ever offered before: the most sublime and radiant mellow of devotional service, the mellow of conjugal love." (Cc. Adi 1.5)]

Bhakti manifests from Sri Radha, and it is Her various bhavas that is called bhakti. Radhika's bhavas, namely modana and madana, cannot be given to the world, and even Krsna cannot experience these bhavas, what to speak of others. For that reason, in order to taste them and to distribute a sprinkle of them upon the world, Krsna came with the mood of Sri Radha in the form of Sri Caitanya Mahaprabhu and gave manjari-bhava. In this unnatojjvala-rasa, Lalita and Visakha have to wait and ask for permission from Sri Rupa Manjari to enter Radhika's kunja.

Sri Caitanya Mahaprabhu descended to present this elevated bhava, and Srila Rupa Gosvami established it in the world. You should consider Srila Bon Maharaja in the succession from Srila Rupa Gosvami, and only then will you be able to understand his dharma and activities. I am not a learned scholar, and therefore I do not want to say anything more than this.

I knew him since 1946. He was my siksa-guru, and he was one of the prominent disciples of Srila Bhaktisiddhanta Sarasvati Gosvami Prabhupada in the line of Srila Bhaktivinoda Thakura. He left home to surrender to the lotus feet of his Gurudeva by accepting diksa from him, and at that time he was given the name Nandasuno Brahmacari. After initiation, along with his god-brother Hayagriva dasa Brahmacari, he went to Kasi. There they met with the principal of a Sanskrit university who was a very learned and who had even been awarded a prize by the president of India. The principal was Bengali, and therefore when he saw these two brahmacaris he inquired from them, "Are you coming from Mayapura? Are you coming from that person who is freely giving brahminical thread and diksa mantras to those who are not qualified at all -- to sudras -- and making them brahmanas?"

At that time the boys were at the very young age of twenty-three or twenty-four years. They immediately stood up and replied, "Yes, we are coming from Mayapura. Our Gurudeva is Srila Bhaktisiddhanta Sarasvati Thakura. If you do not mind, we want to know why you are commenting in a critical way. We would like to know the meaning of a sloka, and we hope you will explain it. In Srimad Bhagavatam it is stated:

["If one shows the symptoms of being a brahmana, ksatriya, vaisya or sudra, as described above, even if he has appeared in a different class, he should be accepted according to those symptoms of classification." (Srimad Bhagavatam 7.11.35)]

Then, hearing these boys reciting Sanskrit slokas and seeing their intellectual capacity, that scholar began to tremble. Although he was qualified in all studies, he was not able to answer their query.

What was their question? "As stated in the sastras, the divisions of the varnas are given according to the qualities of a person, and not according to his birth. The conception that the son of a brahmana will be a brahmana and the son of a sudra will be a sudra is not that of sastra. If this were the fact, then how has Sri Narada Muni become worshippable for all brahmanas although he took birth in the family of sudras? Not only was this true of Narada, but even Vyasa, Rama and Krsna were not the sons of brahmanas, and still they are worshipped by brahmanas. Why is it so? Can you answer us?"

The principal was not able to answer, and at last his wife pacified the boys and begged forgiveness from them. What else should I say of the scholarly qualities of Srila Bon Maharaja?

Whenever there was any festival or special occasion, Srila Bon Maharaja used to invite me with great honor, and he would mercifully give me unlimited affection like a father, even though I am not equal to the great-grandson of His Divine Grace.

He was once narrating how people in general have the understanding that Krsna took birth in Mathura and was later transferred to Gokula by His father, Vasudeva. That is the common understanding prevailing everywhere, but our acaryas, especially Srila Visvanatha Cakravarti Thakura, Srila Jiva Gosvami, and Srila Sanatana Gosvami have given very beautiful and authentic purports to this and all other pastimes. If someone goes deep into their purports, they will find that when Akrura was taking Krsna and Balarama to Mathura from Vraja, it was actually Krsna's expansion Vasudeva Krsna and the expansion of Balarama who went to Mathura.

I have only pointed in the direction of Srila Bon Maharaja's spiritual life's sketch. What he preached around the world is in the line of what Srila Rupa Gosvami established regarding the stage of bhajana of Sri Sri Radha-Krsna as shown by Sri Caitanya Mahaprabhu, and all this can be narrated in one sloka:

["The philosophy of Sri Caitanya Mahaprabhu is that Krsna is the only object of worship. As Krsna is the object of worship, similarly His place, Vrndavana-dhama, is also worshippable. Krsna was worshiped by the damsels of Vrajadhama, and Mahaprabhu recommends that theirs was the highest, topmost grade of worship because it was pure love. Mahaprabhu also taught that Srimad-Bhagavatam is the spotless Vedic literature, and krsna-prema is the highest goal of life."]

Saying these words, I offer my puspanjali to his lotus feet.

[The above puspanjali speech was translated from Hindi by Sripad Madhava-priya dasa Brahmacari at the Sri Kesavaji Gaudiya Matha in Mathura, U.P., India]