A Phoned Glorification of Kartik Month 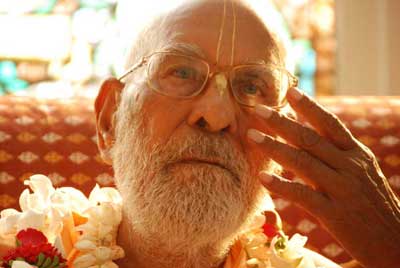 [In Vrndavana, India, October 28, 2002, at 6am, upon the first glimpses of sunrise, five hundred devotees from India and around the world were sitting in the beautiful Sri Rupa Sanatana Gaudiya Matha in Vrndavana, India. Surrounded by Rajasthani pillars, colorful bas-relief and other paintings of Krsna's pastimes on the walls, walls painted in shades of yellow, saffron, and beige, sastric verses appropriate for entering vraja-bhakti painted in large letters above the archways, and lush creepers hanging from the balconies, the devotees had just finished singing their morning bhajanas.

They were now waiting to be connected by a loudspeaker phone system to the voice of Paramaradya Sri Srimad Bhaktivedanta Narayana Gosvami Maharaja. He was in Delhi, some four hours away by material calculation, resting in the home of his disciples as he performed his naravata-lila (human-like pastimes) of recuperating from a recent heart operation. As baby Krsna liberated His devotees Nalakuvera and Manigriva, although His own belly was bound by ropes, so Srila Maharaja now performed a heart operation on his followers, although in his naravata-lila he was recuperating from his own. 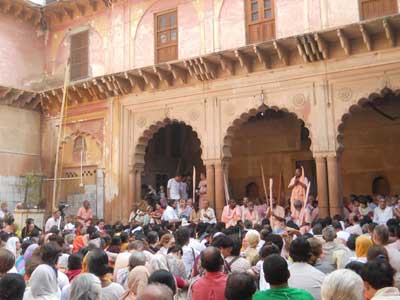 Srila Maharaja began his phoned discourse in English, but then he said he would continue in Hindi. The doctors had allowed him only ten minutes to speak, and in Hindi, his mother tongue, he would be able to reveal much more than in English. After his lecture was completed, Sripad Madhava Maharaja, who was present with him, translated his Hindi into Bengali, and after the receiver clicked, Prema-prayojana dasa translated it into English. The following is a transcription of part 1 of that English translation:]

Very rapidly and very energetically, practically without pausing for any breath at all, and having so much taste and relish in the glorification of Kartika vrata*, Srila Maharaja explained many things, and I will try to repeat them one by one.

First he wanted to impress upon us how fortunate we are. He said, "I am not fortunate because I am in Delhi, so close to Vrndavana yet so far away. But you are lucky because you are in Vrndavana dhama during this time of Kartika and you are observing Kartika vrata there.

What is the significance of this Kartika month and Damodara vrata? Srila Maharaja said that this month is called the month of Damodara; Damodara is He whose belly was bound by the rope of Mother Yasoda. He was not actually bound by a rope, however; He was bound by prema, by pure vatsalya-bhava (parental love). Krsna is anadi; He has no beginning. And He is ananta; He has no end. Still, although He is Parambrahma, that unlimited beginningless and endless Supreme Lord can be bound and trapped by prema. Therefore this month is called Damodara vrata, and those who observe it will attain the prema by which they can bind Parambrahma, the Supreme Lord. Those who can observe this vrata are very fortunate.

This month is also called Urja vrata. Urja means sakti, and it specifically refers to Krsna's internal potency, antaranga sakti – Srimati Radhika. Urja vrata actually means Radha vrata, a vow taken for the happiness of Srimati Radhika. If one hears Her glorification in this month, the fruit will come in the form of gopi-prema.

This month is also called Kartika. The adhistatri-devata, predominating deity, of Kartika month is Kirtika-kumari, the young daughter of Kirtika, Srimati Radhika. Those who honor this month, of which Radhika is the predominating deity, by going to the pastime places of Krsna, will certainly, without any doubt at all, have all their desires completely fulfilled. They will attain jugal-seva, service of Radha and Krsna in the anugatya (guidance) of the Vraja gopis.

Rudantam muhur netram-jugman mirjantam. Rudantam means that Krsna is crying and looking towards His mother who has held up a stick. Krsna is pleading, "Don't beat me! Don't beat me!" because Mother Yasoda held the stick as though she was going to throw it at him. He was afraid, and she caught him. Mother Yasoda is so fortunate that she could catch Krsna and then bind Him with her love.

["Neither Lord Brahma, nor Lord Siva, nor even the goddess of fortune, who is always the better half of the Supreme Lord, can obtain from the Supreme Personality of Godhead, the deliverer from this material world, such mercy as received by mother Yasoda."]

Even Brahmaji, the direct son of Bhagavan, is not so fortunate as to have a love like that of Mother Yasoda. Even Sankara, who is called Hari-hara-ekatma and who thus feels oneness with Bhagavan, cannot have a love like this. Even Laksmi-devi, Bhagavan's full aisvarya-sakti, never has the chance to bind her consort. This is impossible for all of them. But Mother Yasoda has attained this, and she is therefore glorified by Srila Sukadeva Gosvami:

Unless one has love that of like Mother Yasoda, Krsna cannot be bound. He cannot be bound by those who have a bodily conception (dehinam). This mercy is very far away from them. Those who may be liberated (jnaninam), and those who may even be associates but with aisvarya-jnana, knowledge of Krsna's opulence, also cannot bind Krsna. And even for those who have yogic siddhis (atma-bhutanam), this mercy is inconceivable and inaccessible. This type of mercy was attained by Yasoda Maiya, because Krsna can only be bound by prema – not by any other quality.

Srila Maharaja then explained that in this month, when Krsna's babyhood came to an end, He began his boyhood pastimes and went out to graze calves for the first time. Because He was very small, at first He only grazed calves, and the day on which He began is called Gopastami. Then, when He was older, more mature, and entering His kaisora age, He had another Gopastami. This was the first day He went out to graze the cows. Why does Krsna graze calves and cows? He is the son of a king, without any duty. The answer is that on the pretext of grazing cows He escapes the confines of His home and the vigilant glances of His parents and seniors, so that He can go to the forest and meet with Srimati Radhika and the gopis. Gopasthami marks the day of the fulfillment of Krsna's desires to directly have their first intimate meeting, and this pastime also took place in the month of Kartika.

This month is also auspicious because Krsna's leaving the village and going out for cow grazing has been described by the gopis (in Venu-gita: Srimad-Bhagavatam Tenth Canto Chapter 21) in this month. Sri Sukadeva Gosvami said:

["Sukadeva Gosvami said: 'Thus the Vrndavana forest was filled with transparent autumnal waters and cooled by breezes perfumed with the fragrance of lotus flowers growing in the clear lakes. The infallible Lord, accompanied by His cows and cowherd boyfriends, entered that Vrndavana forest.'"]

Acyuta, Krsna, along with His friends, entered into the forest in this sarad (autumn) season. The first night of Kartika was Saradiya Purnima, the full moon night of the autumn season. Srila Maharaja explained how beautiful Vrndavana is at that time. All the lakes and rivers become muddy during the summer, but when that season ends and the sarad season begins, all the lakes, like Manasi Ganga and Kusuma Sarovara, become clear and beautiful. Upon these lakes sit many blossoming lotus flowers that emit a beautiful fragrance, and the breeze carries that fragrance everywhere. In this beautiful atmosphere, Krsna, Acyuta, has gone out to graze cows.

["The lakes, rivers, and hills of Vrndavana resounded with the sounds of maddened bees and flocks of birds moving about the flowering trees. In the company of the cowherd boys and Balarama, Madhupati Sri Krsna entered that forest, and while herding the cows He began to play His flute."]

In Vrndavana there are many rows of flowering trees, which are attracting the bumblebees, who are now intoxicated by their honey. Many types of birds are singing various tunes, and these birds play on different mountains like Giri Govardhana. At that time, Madhupati Krsna, who is full of madhu, sweet and attractive qualities, entered the forest surrounded by His friends.

In this month the gopis stay in their homes and feel great separation from Krsna, and at the same time, by their bhava-netra, the eyes of their ecstatic love for Krsna, they can see Him entering the forest.

["Wearing a peacock-feather ornament upon His head, blue karnikara flowers on His ears, a yellow garment as brilliant as gold, and the Vaijayanti garland, Lord Krsna exhibited His transcendental form as the greatest of dancers as He entered the forest of Vrndavana, beautifying it with the marks of His footprints. He filled the holes of His flute with the nectar of His lips, and the cowherd boys sang His glories."]

All these verses are the glory of this month. It was in this month that the gopis remained in their homes and spoke to each other:

["The cowherd girls said: 'O friends, those eyes that see the beautiful faces of the sons of Maharaja Nanda are certainly fortunate. As these two sons enter the forest, surrounded by Their friends, driving the cows before Them, They hold Their flutes to Their mouths and glance lovingly upon the residents of Vrndavana. For those who have eyes, we think there is no greater object of vision.'"]

O sakhi, in this world the vision of this scene is the fruit of having eyes. Krsna is going slowly, remaining somewhat behind the other cowherd boys, so that Balarama will go ahead. Meanwhile, He is looking here and there, hoping to have a glimpse of Srimati Radhika.

[Endnote: A vrata is a vow to observe the rules and regulations and ceremonial functions of a particular holy occasion.]