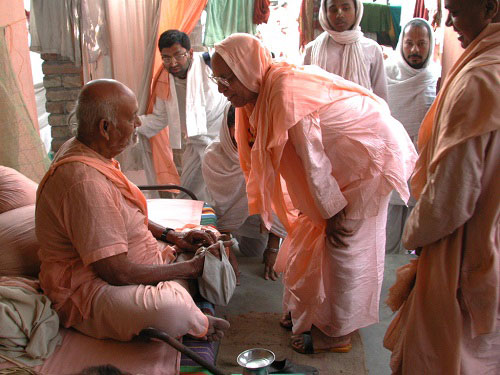 [In the mid-afternoon of November 7th, 2002, just after Parama-pujyapada Srila Bhaktivedanta Narayana Gosvami Maharaja's Vraja-mandala parikrama party reached Varsana from the lap of Giriraja Govardhana, the devotees heard the news: "Prapujya-carana Sri Srimad Bhaktivedanta Trivikrama Maharaja has just left this world." That very evening, in great bereavement, along with all the parikrama pilgrims, Srila Narayana Gosvami Maharaja held a viraha-mahotsava, separation festival. The following is a transcription of his puspanjali glorification, offering the flowers of his heart: (listen to lecture here) ]

I offer my humble obeisances unto the lotus feet of my Gurudeva, nitya-lila-pravista Om Visnupada Sri Srimad Bhakti Prajnana Kesava Gosvami Maharaja, to all the Vaisnavas, and to Sri Gauranga. By the causeless mercy of Sri Guru and Gauranga, the first fifteen days of our niyama-seva Kartika-vrata (vow to follow the rules and regulations of the Kartika month) have passed without a problem; it passed sweetly and happily. Today, however, we received very sad news.

In Sri Caitanya-caritamrta, Sri Caitanya Mahaprabhu asked Srila Raya Ramananda: duhkha-madhye kona duhkha haya gurutara? krsna-bhakta-viraha vina duhkha nahi dekhi para ["Sri Caitanya Mahaprabhu asked, 'Of all kinds of distress, what is the most painful?'Sri Ramananda Raya replied, 'Apart from separation from the devotee of Krsna, I know of no unbearable unhappiness.'" (Caitanya-caritamrta, Madhya-lila, 8.248)] Sri Mahaprabhu asked Sri Raya Ramananda, "What is the worst type of suffering?" Sri Ramananda Raya replied, "Vaisnava-viraha." Para means 'the highest or greatest.' The greatest or most grievous suffering is Vaisnava-viraha, separation from pure Vaisnavas. After the disappearance of Srila Bhaktisiddhanta Sarasvati Thakura Prabhupada, my Gurudeva, Srila Bhakti Prajnana Kesava Gosvami Maharaja, along with a few others, established the Gaudiya Vedanta Samiti; and Srila Bhaktivedanta Svami Maharaja was one of the founding members. Gurudeva had already taken sannyasa and had been preaching for a long time, but now he established the new Gaudiya Vedanta Samiti's headquarters in Navadvipa and began preaching through the Samiti.

As Krsna is bhakta-vatsalya, very affectionate to His devotees, Sri Guru is sisya-vatsalya, very affectionate to his disciples. After some time, some of Guru Maharaja's god-brothers saw his sisya-vatsalya, which was more affectionate than the most loving father could be to his son. These god-brothers could not reconcile this, because previously they had been the objects of all his affection. Hurt, most of them left Guru Maharaja, and only a few stayed with him. Guru Maharaja had three pillars of devotion – three prominent sevakas. Parama-pujyapada Sri Srimad Bhaktivedanta Vamana Maharaja, Parama-pujyapada Sri Srimad Trivikrama Maharaja, and I began to serve him totally, with our lives and souls, taking our lives in our hands [an Indian expression meaning 'ready to risk our lives']. From the very beginning, Pujyapada Vamana Maharaja, Pujyapada Trivikrama Maharaja, and I were made the three pillars of the Gaudiya Vedanta Samiti by my Guru Maharaja. At that time Srila Pariyataka Maharaja was not with us; he joined after some time.

Srila Vamana Gosvami Maharaja, especially, served Srila Guru Maharaja in so many ways. He was the publisher of our Gaudiya Patrika monthly magazine and many other literatures. He was also the 'scribe' of Guru Maharaja's dictations for his correspondence, articles, and books. Even before I joined, when I was a police officer and had never personally met Guru Maharaja, Guru Maharaja would write to me with great love and affection. He would dictate his letters, addressing me as Tiwariji because I came from a high-class brahmana family with the surname Tiwari, and Srila Vamana Maharaja would write down his words. Then, after I joined and until I was initiated, Pujyapada Vamana Gosvami Maharaja would also call me 'Tiwariji.' Srila Vamana Maharaja was like the mother of the Gaudiya Vedanta Samiti. He took care of everyone in the Matha and supplied whatever anyone needed, like prasadam, clothing, and so on.

Years later, Srila Trivikrama Maharaja reminded me of this incident and asked me if I remembered it. I said, "Yes!" and we happily and tightly embraced one another.

Guru Maharaja entered nitya-lila in October of 1968, but internally he is always looking after us and encouraging us. Externally, Srila Trivikrama Maharaja took the place of my Gurudeva in the sense that he encouraged me in all activities. When I began preaching in the West and writing and translating books there, I would write to Parama-pujyapada Srila Vamana Maharaja and Srila Trivikrama Maharaja, and others for advice – because they are very qualified preachers. Srila Trivikrama Maharaja would reply my letters without delay. He would encourage me and inspire me to write more books and to preach all over the world. Pujyapada Vamana Maharaja is the present acarya of the Gaudiya Vedanta Samiti and he was very busy with many grave responsibilities. He was always very happy with my preaching, but sometimes he was sick and therefore he could not always answer my letters. Pujyapada Trivikrama Maharaja, on the other hand, usually remained in one place, and he always replied without delay; I cannot forget him.

I consider both Bhaktivedanta Vamana Maharaja and Bhaktivedanta Trivikrama Maharaja to be my siksa-gurus. They supported, nourished and inspired me so much so that I cannot express my feelings in words; but Pujyapada Trivikrama Maharaja's familial love for me was even greater than that of Pujyapada Vamana Maharaja. We used to sleep together, quarrel together over philosophy, and we loved each other in so many ways.

Sometimes we presented different ideas and we countered each other's arguments, but he greatly honored me. Although I was giving honor to him as a siksa-guru, sometimes, in his last days, he used to offer me sastang pranama (offering of obeisances while lying on the ground like a rod). He even used to offer pranamas to my sandals when I was not present before him. No one else could have done this; he was so polite and humble. He was a senior Vaisnava in all respects and he could help the entire world, but he used to write me, "We cannot do the services you are doing for Gurudeva, so I especially favor you and praise you. May you preach for a long time. May you write and publish many books."

We have lost one of the pillars of the Gaudiya Vedanta Samiti today, but I feel some relief knowing that he left during this Kartika month, during niyama-seva-vrata, and that he was in Navadvipa-dhama. Also, he left at the time of amrta-yoga, an auspicious time of the day according to the movement of the sun and moon, and it was also tritiya-tithi, one of the most auspicious days of the month.

He inspired us to observe Annakuta Mahotsava, Dipavali, and Bhaijaduja (also known as Yama-dvitiya) [The blessing of Yamaraja (the demigod who punishes sinful persons after death) to his sister Yamuna-devi (the personified river), that if brother and sister take bath on this day (the day after Govardhana annakuta), they will not go to the adobe of Yamaraja after death. -ed]

Internally, in my heart, Srila Trivikrama Maharaja told me that he would leave this world after we observe those festivals; it was a wonderful thing. Otherwise, if he had left before, we would have been absorbed in thoughts and activities in relation to him, and we would not have been able to properly observe those important holy functions.

Now, being the representative of you all, I am offering my heartfelt puspanjali at his lotus feet. I think that he has been placed in Samadhi today. Where is he now? He is in Navadvipa-dhama or Vraja-dhama. I pray for all of us that he will be very merciful to me, and to all of you, and that he will inspire us and give us blessings so that we can try to serve Gurudeva and do bhajana as he did.