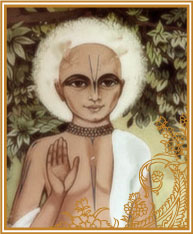 [Today is a very auspicious day. It is the disappearance day of Srila Jiva Gosvami. We don't observe the disappearance days of Lord Krsna, Lord Caitanya Mahaprabhu, Lord Rama or any other incarnation of Bhagavan, but we observe the disappearance days of His associates. By such observance we learn many things about their worshipable Sri Sri Radha-Krsna, Sriman Mahaprabhu and Lord Nityananda Prabhu. We can understand how they practiced bhakti-yoga and how they received the service of Krsna and Mahaprabhu. We can learn from their lives’ examples how they accepted the process of sadhu-sanga, bhajana-kriya and anartha-nivrtti, and how they gradually developed nistha, ruci, asakti and rati. This is more important for us. [Although they are nitya-siddha devotees, they sometimes act as conditioned souls in the beginning, so we can learn how a conditioned soul can become a pure devotee.]

He was the topmost learned person at that time, and he preserved the legacy of Srila Rupa Gosvami. Because he was always with him, he was able to write many commentaries in pursuance of Rupanuga Vaisnavism. If it were not for him, all of Srila Rupa Gosvami's books would have been lost. He also preached, especially to Sri Syamananda Prabhu, Sri Narottama dasa Thakura, and Sri Srinivasa Acarya. Try to practice serving the cause of Caitanya Mahaprabhu's mission as he has done.

So-called gurus hanker to make many disciples. They spend so much money, make so many agents, and tell them, "If you bring five disciples, I will pay you so much." This is going on nowadays, but Srila Jiva Gosvami and the Six Gosvamis did not practice this. How many disciples did Srila Raghunatha Das Gosvami, Srila Sanatana Gosvami, Srila Rupa Gosvami and Srila Raghunatha Bhatta have? Srila Jiva Gosvami did not have any formal disciples at all, but the whole world is his disciple. Sri Syamananda Prabhu was initiated by another guru, Sri Hrdaya Caitanya, Srila Narottama dasa Thakura was initiated by Srila Lokanatha dasa Gosvami, and Srila Srinivasa Acarya was initiated by Srila Gopala Bhatta Gosvami, but they all came under the shelter of Srila Jiva Gosvami. He then explained to them the Vedas, Upanisads, and all other sastras, and he also thoroughly explained to them all tattvas, established philosophical truths.

They wanted to be initiated by him, but he refused. He told them, "There are so many elevated Vaisnavas more qualified than I. Please, you should go to Lokanatha Gosvami, and you should go to Gopal Bhatta Gosvami." They had not intended to go to them; they wanted him to be their guru. Yet, they followed his instructions. Srila Narottama dasa Thakura went to Srila Lokanatha Prabhu and Srinivasa Acarya Prabhu went to Srila Gopala Bhatta Gosvami.

Lokanatha Gosvami refused to give Narottama dasa Thakura initiation, although the Thakura waited for many years. At night, Narottama dasa cleaned the place where Lokanatha Gosvami had passed stool, and finally, seeing his sincerity of purpose, Lokanatha Gosvami was bound to give him initiation. Similarly, Gopal Bhatta Gosvami never wanted to accept any disciples. By the request of Srila Jiva Gosvami he accepted only one disciple – Srinivasa Acarya. However, those two disciples, along with Syamananda Prabhu, went to Bengal and collected thousands and thousands of followers.

Srila Gaura Kisora dasa Babaji also never wanted to accept any disciples. Only by the special request of Srila Bhaktivinoda Thakura did he initiate his son, Srila Prabhupada Bhaktisiddhanta Sarasvati Gosvami. He saw in his own heart that if he did not initiate Srila Sarasvati Thakura, he would die. Srila Babaji Maharaja was therefore bound to give him initiation, but he gave no initiation to anyone else. His disciple, Srila Sarasvati Thakura, performed a miracle. He made disciples in all of Bengal, all over India, and after that all over the world. Thus, who is more merciful: the guru or the disciple? We see that disciples are more merciful than their gurus. This is because they go out to everyone, to invite them to experience the mercy of their guru.

Once, when Srila Lokanatha Gosvami and his disciple Srila Narottama dasa Thakura were both engaged in bhajana, a thirsty person came to them desiring water. He went to Lokanatha Gosvami, who was chanting and absorbed, oblivious to his presence. Then, when he went to Narottama dasa Thakura, that 'baby sadhu' procured some water and gave it to him. Lokanatha Gosvami understood this and later told him, "You are not qualified. You should go at once to your village. I don't want a disciple like you, who has no faith in Sri Krsna Bhagavan’s name. Krsna's name is Krsna Himself. He has manifested all His power, beauty and opulence in His name. That name is more powerful than He Himself, but you have no faith in this truth." [Srila Maharaja explained on another day that in real bhajana, the devotee is personally serving Srimati Radha and Sri Krsna while chanting. Srila Lokanatha dasa Gosvami told Srila Narottama dasa that he was not qualified because he had interrupted his service to Radhika and Krsna, and went to serve an ordinary man. Had Srila Narottama dasa Thakura continued his bhajana, Krsna would have been pleased and the man also would have been pleased. By Lord Krsna's arrangement, he would have gotten water from another source] Srila Narottama dasa Thakura was so faithful that he followed his guru's instructions, and he also initiated thousands and thousands of disciples in the course of his preaching on his guru's behalf.

There are many teachings to contemplate in this regard. Srila If Jiva Gosvami had not written Sad-Sandarbha, if he had not written Sri Gopala Campu, if he had not revealed his commentaries on Sri Ujjvala Nilamani, Sri Bhakti-rasamrita-sindu and so many other books, we would not be able to know the mercy of Srila Rupa Gosvami. We therefore offer our obeisances today unto the lotus feet of Srila Jiva Gosvami. We pray that we may serve our gurudeva as he served Srila Rupa Gosvami. He manifested both Sri Caitanya Mahaprabhu and Sri Sri Radha-Krsna. It is very rare for anyone to be like him.