Why There Are Different Religions 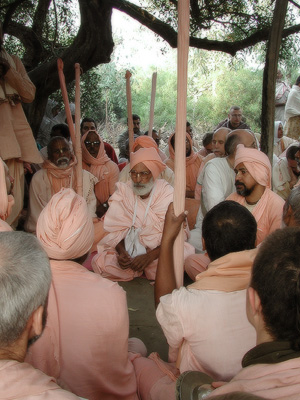 (A Class on Jaiva Dharma)

One day, in the early morning during brahma-muhurta (one hour 36 minutes before sunrise, during arunodaya, when the sun has not yet arisen but the darkness is about to go), Premadasa Babaji Maharaja was sitting near Tulasi, who was very large and spread out. Babaji was sitting on a kusa-asana, an asana made of banana leaves, chanting his two lakhs of harinama. The holy name can be chanted whether or not one has taken bath. It can be chanted even while one is sitting on his bed or walking, but one should try to be seated. The chanter should have a pure, one pointed mind, and while chanting Hare Krsna, he should remember the pastimes of Gaurangacandra and Krsnacandra. Premadasa Babaji was doing this. He was thinking about Krsna and Radha, with Their many sakhis in Sanketa-kunja.

All the sakhis were serving Radha and Krsna in so many ways, in the early morning before sunrise. At that time, the old monkey of Radhika called out that Her mother-in-law Jatila was coming, and that they should all go to their homes. When he yelled, "Jatila! Jatila!" Radhika thought he was trying to say, "You are living in Your in-laws home, but You stealthily leave at night. You are unchaste and very tricky. Because you are a very great cheater, Jatila is coming to give you your just reward. Wait a little. She is coming with a bamboo stick. Be seated here and she will come." Hearing the monkey's call, everyone became disappointed and thought, "Oh, Jatila is coming! We must go to our homes right now."

Babaji Maharaja was hearing all this. There was no monkey, but he heard the monkey's voice and said, "Oh, Ananga Manjari is telling you to make this old monkey silent. He should not disturb. Radha and Krsna are sleeping here. Ramana Manjari, go and stop that monkey.'" It did not appear that he was speaking to anyone in particular, but Sannyasi Thakura was present and eager to hear. Therefore, when Babaji Maharaja said with his eyes closed, "Ramana Manjari, go and tell that monkey not to create a disturbance," Sannyasi Thakura knew, "My Gurudeva is directing me. My transcendental siddha-deha name is Ramana Manjari, and one of my duties is to serve Radha-Krsna Conjugal so that no one will disturb Them. My service is to fan Them with a camara, and to do all related activities."

Premadasa Babaji Maharaja then lost his external consciousness, and began to roll on the ground. This is the real process. Don't be like the sahajiyas who think they can have siddha-deha when they still have many worldly desires, and when kama and krodha, lust and anger, are still in their hearts. You cannot forcefully or artificially attain these perfections. Chant nama and serve your Gurudeva very patiently. When you seriously execute this service and are sufficiently qualified, Gurudeva himself will reveal all these confidential truths to you. On the other hand, if you are not qualified and you take siddha-deha artificially, you will achieve nothing. You will only be ruined.

Now the cuckoos were singing, peacocks were dancing, and the sun was rising. Sannyasi Thakura began to chant somewhat loudly, "Hare Krsna Hare Krsna," and these words entered the ears of Premadasa Babaji. Babaji Maharaja opened his eyes and asked, "Where am I? What was I doing?" He then began again to chant Hare Krsna. This is bhajana, and we should also try to enter that bhajana realm. Don't endeavor to collect money, position, or a lady friend or boyfriend. Don't go in that direction. You have already engaged in these activities when you were hogs and dogs, and those animals can enjoy better than you. Why try to imitate them? If you are married, no harm. Remain with your wife and be like a brahmacari; you and your wife or husband can do bhajana together.

After I joined the Matha and my spiritual life with Gurudeva, I was never silent. I continually asked Gurudeva questions, and he never became disturbed. He was always very happy to patiently satisfy me by his answers. He convinced me of his conclusions by using so many kinds of logic. He mostly used logic and not so many slokas, but the slokas kept running after him and following him. Paramapujapada Sridhara Maharaja and my Guru Maharaja always discussed with one another on the basis of logic. Sometimes Srila Sridhara Maharaja defeated my Gurudeva, and then my Gurudeva would answer his questions and defeat him. Sometimes the balance scale was up on one end, and sometimes it was up on the other. Hearing these conversations with utter attention, all the other devotees used to enjoy.

Sannyasi Thakura began, "There is one God, and all living entities have come from Him. Because God is one, there should be only one religion throughout the world. We are all souls, so our dharma should be one; but I see so many differences everywhere. So many very highly learned scholars preach about dharma, but their moods and teachings are different. I want to know what is really the dharma of all living entities, and why all these gurus and acaryas explain this topic in so many different ways. If religion is one without second, why is their preaching not one?"

Sankaracarya has taught one thing, Srila Vyasadeva has said something different, and Sad-darsana acaryas Jaimini and Kapila have said something still different. Why do Christians have different opinions, and why do we differ from them? Muslims kill all those who are not Muslim. They say, "These people are kafar (those who do not believe in the Muslim dharma), so it is best to kill them." Nowadays this is a big problem. Taliban and Bin Ladin want to make the entire world, and the entire universe, along with its Sun and Moon and everyone in it, Muslim; and they want to kill all those who will not become Muslim. This is the biggest problem at the present time.

After hearing the inquiry of Sannyasi Thakura, Babaji became very happy and said, "This is a very good question. You are extremely fortunate. I am not perfect, but I will answer you to the best of my knowledge." A bona fide guru will not say, "I am perfect." Rather, he gives credit to the All-perfect Krsna. Krsna has explained in Bhagavad-gita about the real, transcendental dharma for all jivas of the universe. There is only one dharma. Krsna never said there is any such thing as Hindu-dharma, Muslim-dharma, brahma-dharma, or any other. He has only said 'dharma,' the religion of all living entities.

[Pundarika dasa reads from Jaiva Dharma:] "Paramahamsa Babaji meditated upon the lotus feet of Bhagavan Sri Krsna Caitanya, and began to speak: 'O most fortunate one, I shall describe to you the principles of dharma as far as my knowledge allows. An object is called a vastu, and its eternal nature is known as its nitya-dharma, eternal religion. Nature arises from the elementary structure of an object. By Krsna's desire, when an object is formed, a particular nature is inherent in that structure as an eternal concomitant factor. This nature is the nitya-dharma of the object.'"

[Srila Narayana Maharaja:] Try to understand. There are two substances: jada and cetana, or conscious and inert. What we see with our eyes, what we feel by our intelligence, what we touch and what hear, are all jada, inert. They are not transcendental. That which is beyond the vision of these eyes exists forever, with no change; and those who have free will, or independence, are cetana, conscious. Ants are very small, and yet they have free will and they can realize happiness and sorrow - but the body can never. Due to the soul's presence we feel something, we walk and we do so many things. If the soul is not there, we cannot realize anything. Where there is free, independent will and the experience of sukha and dukha, happiness and sorrow, and suffering, there is consciousness.

There are two conscious entities; one is the soul and other is the Supersoul. All souls are eternal servants and part and parcel of the Supreme Soul; the Supersoul is the Supreme Lord Krsna Himself. There is a relation between the souls and the Supersoul, whether they are in India, or in America, Australia, Africa, New Zealand, or even in China or Russia. There are not many Gods, like an Australian God, Indian God, Christian God, and Buddhist God.

Actually, in the Buddhist philosophy there is no God and no soul. They have no idea how they are alive; they are like mad persons or mad dogs. A mad dog is always busy, but for what is he busy? He has no goal of life. As he very quickly runs on the road, I may ask him, "Where are you going?" and he will answer, "Oh, I have no time to tell you." Then he will go some distance and see a milestone (a large stone on the side of the road with information written on it regarding the mileage to any destination), and he will quickly pass urine and then quickly turn back and run the other way. Someone may then ask him, "Where are you going?" and he will again reply, "Oh, I have no time to tell." We are like that, and especially the Buddhists are like that. Buddhists have no goal, no life; nothing. Buddhism is popular because so many want sense gratification nowadays. They are like he-dogs and she-dogs, and they are thus attracted to the Buddhist 'dharma.' I pray that you do not go to the assembly of these mad persons.

So there are no separate Indian, English, or Christian Gods. God is one, and all living entities are souls. There is no difference between the souls in dogs, cats, rats, ants, or even grasses and creepers. The quality of all souls is the same. They have forgotten Krsna, they are in different species of life, and they are tasting the fruits of their past activities.

The relation between the Supersoul and the soul is called prema. It is only prema and nothing else. Caitanya Mahaprabhu came to give this love and affection to this whole world, and this is really the religion of the entire universe and all living entities. We have forgotten this, and that is why we suffer so much. We will have to suffer. So try to chant more and to associate more with pure devotees, so that in this life you can give up all material attachments and be happy forever. Srila Bhaktivinoda Thakura has been explaining all these truths in Jaiva Dharma.

Caitanya Mahaprabhu came only to give this love and affection to all. He gave it to tigers and bears on the way to Vrndavana. He gave love and affection even to trees and creepers, and even to Jagai and Madhai. I have come to remind you that you can only be happy by following this very religion.