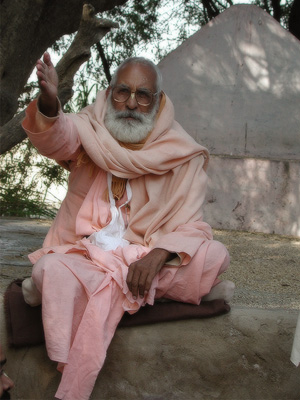 You should know one thing. ISKCON was first established by catur-mukha (four-headed) Brahma. He is our first guru. He is the original founder-acarya of ISKCON, and his disciples like Sanaka, Sanandana, Sanatana, Sanat-kumara, and Narada are real ISKCON preachers. After them, especially in Kali-yuga, Madhvacarya, Ramanuja, Visnuswami, Nimbaditya, and so many others appeared. In our line (the Gaudiya Sampradaya), especially in Kali-yuga, Sri Madavendra Puri is the root, the seed. His disciples are Srila Isvara Puripada and Nityananda Prabhu, from Isvara Puripada came Sri Caitanya Mahaprabhu, and from Him came Svarupa Damodara. Then, after them, Srila Bhaktivinoda Thakura and Srila Prabhupada Bhaktisiddhanta Sarasvati Gosvami Thakura appeared in their line, and they are also part of the real ISKCON. All these are ideal ISKCON personalities, and you should always be aware of this.

At the time of Srila Bhaktisiddhanta Sarasvati Gosvami Thakura, Srila Sarasvati Thakura was the president of ISKCON. He sent one arm, Srila Prabhupada Bhaktivedanta Swami Maharaja, who was given sannyasa by Srila Bhakti Prajnana Kesava Gosvami Maharaja, and who then gave ISKCON its English name [Previously it was called by different names, like Gaudiya Vedanta Samiti, Gaudiya Matha, Visva Vaisnava Raja Sabha, and Krsna-bhakti-rasa bhavitah mati.] Your Prabhupada, Srila Swami Maharaja, only changed the name into English. He is not the founder-acarya of that eternal ISKCON. [Srila Prabhupada sometimes said he was the founder-acarya for two reasons: for management and legal purposes, and also for the faith of his young disciples who would not have understood another presentation at that time.] The founder-acarya is originally Brahma, and it was actually established by Krsna.

[The following are two of the many quotes by Srila Prabhupada in this regard: "It is not that, 'Bhaktivedanta Swami has brought this.' They say. They give me the credit. That is my good fortune also. But actually I am just like a peon. I have brought, but I am delivering it without any adulteration. That may be my credit. And if you take it without any adulteration and practice it, then your life is successful. (Aug 3, 1975)"
"The Hare Krsna movement is not a new movement as people sometimes mistakenly think. The Hare Krsna movement is present in every millennium of Lord Brahma's life, and the holy name is chanted in all the higher planetary systems, including Brahmaloka and Candraloka, not to speak of Gandharvaloka and Apsaroloka. The sankirtana movement that was started in this world five hundred years ago by Sri Caitanya Mahaprabhu is therefore not a new movement. Sometimes, because of our bad luck, this movement is stopped, but Sri Caitanya Mahaprabhu and His servants again start the movement for the benefit of the entire word or, indeed, the entire universe."
(SB 7.15.72 purp.)]

All of you who are following this disciplic succession are ISKCON. Don't think that you are not. I am ISKCON. I'm not different from ISKCON. I am 'Bhaktivedanta' . Like father, like son. I am the real successor of Srila Bhaktivedanta Swami Maharaja, and there is no other. You should know this very openly.

I am Bhaktivedanta and he is Bhaktivedanta, but he received this name after I did. I'm senior to him in this regard. By my request he became ready to take sannyasa, and my Guru Maharaja gave sannyasa to him. I was like the priest at his sannyasa ceremony. I performed the fire sacrifice, I made his danda and I taught him how to wear his sannyasa garments. Although he is junior to me and I'm senior to him in sannyasa, he is my siksa-guru. I'm his disciple. I'm Bhaktivedanta, and I'm also ISKCON. Don't think that I'm out of ISKCON.

Prapujyacarana Sri Srimad Bhaktiraksaka Sridhara Maharaja, Srila Madhava Maharaja, and other bona fide disciples of Srila Sarasvati Thakura are also in ISKCON. You may know that Srila Bhaktivedanta Swami Maharaja has said, "Pujyapada Sridhara Maharaja is my siksa-guru." Those who have the false ego that dictates, "We are ISKCON, and all others are not ISKCON," are very easily going down. They are not really ISKCON if they do not accept and respect all our gurus. You should always respect all those who have taken shelter of Caitanya Mahaprabhu, whether they are initiated or not. Give them proper respect. This is the idea of real ISKCON.

Don't think, "He is a disciple of someone other than my gurudeva." Don't be sectarian, like a closed box. Be open. Give respect to all those who chant Hare Krsna and accept Sri Caitanya Mahaprabhu, Nityananda Prabhu, and our guru-parampara. I've come to tell you all these truths.

I'm happy that all local and other devotees here are coming and honoring all Vaisnavas in Caitanya Mahaprabhu's family. Always respect those who have this idea. Don't quarrel, as some devotees are now quarreling amongst themselves. Giving respect to each other, and come together at least for festivals, on days like Krsna Janmastami, and Mahaprabhu's birthday. Invite everyone, give classes to each other, remember the words of Sri Caitanya Mahaprabhu and Srila Rupa Gosvami, and try to follow them. If you do that, you will not fall down. If you don't, you may fall.