A Clearer Understanding Of Namabhasa 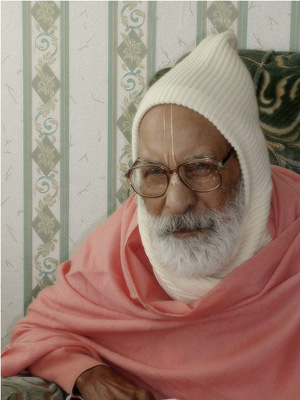 [Most devotees are not fully clear about the meaning of the namabhasa, the clearing stage of chanting Hare Krsna. Several devotees asked Srila Narayana Maharaja about this topic, and those questions and answers took the form of three classes in Cessnok, Australia. The following is a transcription of the first of those classes.]

[Sripad Asrama Maharaja:] In Brisbane you were discussing namabhasa (a glimpse of the light of the holy name before its full light is perfectly visible), but there is still some confusion amongst the devotees. By chanting namabhasa, will all prarabdha (sinful reactions from which one is suffering at the present) and aprarabdha-karma (potential suffering) go away?

[Srila Narayana Maharaja:] You should know that there are so many kinds of namabhasa. Not all types of namabhasa are the same; chaya-namabhasa (a semblance of the pure name obscured by ignorance and anarthas, like the sun, covered by clouds, which does not manifest its full brilliance) and pratibimba namabhasa are not the same. All sins will not go away by pratibimba namabhasa (a mayavadi may chant like this), but they will go away by chaya-namabhasa (endeavoring to chant for bhakti).

[Sripad Asrama Maharaja:] When Srila Swami Maharaja came, and the hippies were chanting Hare Krsna Hare Krsna, they were not mayavadis; they were ignorant and innocent. Can this type of chanting be said to be chaya-namabhasa?

[Sripad Asrama Maharaja:] Will all sinful activities go away by that chanting?

Srila Visvanatha Cakravarti Thakura has explained that his first namabhasa was enough to burn his past sins, but he repeatedly did so and therefore his chanting was like a sadhana. Although he was not aware of the results of such chanting, all his offenses, sins: prarabdha reactions that have already fructified), aprarabdha (reactions not yet fructified), kuta (reactions lying dorment), and avidya (ignorance, the cause of sin) were gone.

[Srila Narayana Maharaja:] With the first, or by gradually doing so, all his sins, prarabdha, aprarabdha, and kuta were all gone. He never realized this until he saw that his death had been stopped, because at that time he heard the dialogue of the Visnudhutas and the Yamadhutas. Hearing very minutely from them the glories of chanting the holy name, he thought, "Oh, they have glorified Narayana and His kirtana. They are my Gurus." He wanted to touch their feet, but they disappeared before he could do so. At that time he realized, "I've chanted, and the fruit is that my death has been stopped. I should now chant the pure mantra."

He then went to Haridvara and practiced, I don't know for how many months or years. At that time it was Satya-yuga, so it may have been thousands and thousands of years. In the course of time, he developed love for Paravyoma (Vaikuntha) Narayana, and he was totally purified. The Visnudhutas came again at that time. They checked to see if something was still lacking, but they saw that his work towards full purification had now been completed and they took him back with them to Vaikuntha.

We see that the Visnudhutas also came to Dhruva at the time of his death, but he said to them, "Where is my mother?" He had some attachment, and that is why he was stopped from going to Vaikuntha, and instead went to Dhruva-loka, which is the Visnuloka here in this universe. He was not fully liberated like Ajamila. Ajamila went to Vaikuntha and Dhruva was stopped in this universe and went to Hariloka (also called Rama-priya Vaikuntha). Don't doubt this.

["Krsna-nama is the sweetest of the sweet and the most auspicious of all that is auspicious. It is the flourishing creeper, the eternal, fully-ripened fruit of the Bhagavata, and the embodiment of knowledge, cit-sakti. O best of the Bhrgu dynasty, even if someone chants the holy name only once, with faith or indifference (hela), he is immediately delivered from this ocean of birth and death." (Hari-bhakti-vilasa 11.234)]

Even one name is enough. Sakrd api parigitam, sraddhaya. If one chants with sraddha, honor and faith, and even if one chants helaya, without it, in other words, if he chants namabhasa, even that namabhasa will cross all sinful reactions.

[Syamarani dasi:] Gurudeva, you were talking about the people who were ignorantly or innocently chanting Hare Krsna when our Prabhupada came to America, and then you started talking about the 'burnt rope.' You didn't finish; what is their situation?

["Completely rejecting all religious activities which are materially motivated, this Bhagavat Purana propounds the highest truth, which is understandable by those devotees who are fully pure in heart. The highest truth is reality distinguished from illusion for the welfare of all. Such truth uproots the threefold miseries. This beautiful Bhagavatam, compiled by the great sage Vyasadeva [in his maturity], is sufficient in itself for God realization. What is the need of any other scripture? As soon as one attentively and submissively hears the message of Bhagavatam, by this culture of knowledge the Supreme Lord is established within his heart." (SB 1.1.2)]

What is the meaning of tat-ksanat?

[Srila Narayana Maharaja:] Immediately. What is the meaning here? One may be full of anarthas, but he now begins to hear the hari-katha in Srimad-Bhagavatam. Others are hearing with taste and sraddha, but they are not in Goloka Vrndavana. Why not? The word tat-ksanat is therefore used properly here. You have been in this world for unlimited time, and if you are now on the path to perfection, if you are now on the way, this is tat-ksanat. In comparison to unlimited time, if in a year, or two years, or two births, one becomes purified, that is tat-ksanat. Try to reconcile this.

[Brajanatha dasa:] The example is also given that when you take out the plug of a fan, it's still running, but it will stop very soon.

[Srila Narayana Maharaja:] Yes. If you will stop peddling on a cycle, it will continue to move for a short time. The driver of a train steps on the breaks, and the train continues to go for two miles, three miles, or four miles. Still, it has 'stopped,' and thus there is no harm in using the word tat-ksanat.

[Radhanatha dasa:] The Yamadhutas had never seen this before.

[Srila Narayana Maharaja:] The Yamadhutas can do wrong, but not the Visnudhutas.

[Radhanatha dasa:] Up 'till the time the Yamadhutas came to take Ajamila, they had never heard of this situation before. So namabhasa must be very rare.

[Srila Narayana Maharaja:] No, it is not rare. Caitanya Mahaprabhu and Nityananda Prabhu came for this. Those who do not commit any offenses to Vaisnavas (the first of the ten namaparadhas) will do namabhasa. Somehow they are on the way, and very soon, in so many births, they will become pure. Don't doubt this; what has been written in sastras is correct.

[Srila Narayana Maharaja:] Yes, gradually. If one chants namabhasa continually, he will not commit aparadha. If you fall down on the earth, you can stand up by taking shelter of the same earth. Similarly, if you have done anything wrong or committed many offenses, if you chant again, with repentance.

Come with strong, full belief, don't have any doubt, and always respect Vaisnavas.