An Istagosthi - The Process Of Initiation 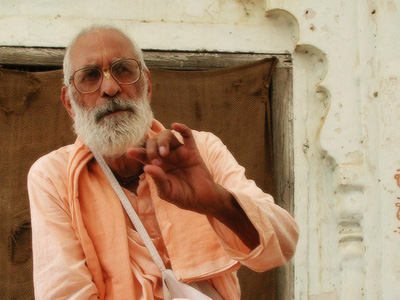 [In New Braja (Badger, California), on the morning of June 5th, Srila Narayana Maharaja had a meeting with some of the senior devotees about book publication, book distribution, Internet publication, preaching, Srila Maharaja's tour plans, and the process of initiation. Then, that evening, just before giving his nightly class on Srila Bhaktivinoda Thakura's book, Bhajana Rahasya, Srila Maharaja held a short istagosthi. He called upon his secretary, Sripad Brajanatha dasa Adhikari, to give a report of that meeting to the 500 devotees present in the New Braja pavilion.

One of the main subjects in Brajanatha prabhu's report was that of initiation. As it happened with Srila Prabhupada, it was happening again with Srila Narayana Maharaja. Srila Maharaja's representatives are travelling all over the world and preaching, and 1000's of aspiring devotees in various countries are desiring to accept Vaisnava initiation from him. Many of those devotees have either met or will meet Srila Maharaja in the near future, but many others have no means to take his personal darsana for some time and they may never meet him. Therefore, so that all initiations take place in an authorized way, following in Prabhupada's footsteps, Srila Maharaja presented a policy statement.]

[Brajanatha dasa:] The next topic discussed was initiations. It is very important that we understand this topic properly. Srila Gurudeva has requested that it should be very clear for all, and I hope that he may also speak one or two words in this regard. [Speaking to Srila Narayana Maharaja] This morning you spoke something about Srila Bhaktisiddhanta Sarasvati Prabhupada and your Gurudeva.

[Srila Narayana Maharaja:] I want my sannyasis, brahmacaris, and grhastha bhaktas to preach the original mood and instructions of Srila Rupa Gosvami, and as a result of our preaching, many will become ready for initiation. Therefore, in order that initiations be carried on according to the parampara system, I want that the proper process be followed.

When I was with my Gurudeva, and also after his disappearance, I made up my mind that I would not accept any disciples. Until 1995 I generally did not give initiation to either Indians or Westerners, but still I was helping those who came to me in all ways, as a siksa guru. At that time, however, although I didn't want to initiate disciples, some cases arose in which I could not avoid initiating. ISKCON leaders obliged me to give initiation. They told so many devotees, "If you go to see Narayana Maharaja, we will kick you out!" and they forcibly did so. Therefore, to give shelter to those devotees, I initiated some of them, and after that our Society (Gaudiya Vedanta Samiti) passed a resolution stating that I should continue to initiate.

During the time of Srila Prabhupada Bhaktisiddhanta Sarasvati Thakura, there were many very qualified sannyasis like Srila Sridhara Maharaja, Srila Vaikhanas Maharaja, Srila Yayavar Maharaja, my Gurudeva Sri Srimad Bhaktiprajnana Kesava Gosvami Maharaja, Srila Madhava Maharaja, and others. Although they were highly qualified, however, they never initiated anyone during the manifest stay of their Guru Maharaja. It was not until after Srila Prabhupada Bhaktisiddhanta Sarasvati Thakura's departure that they began to initiate. Similarly, at the time of my Gurudeva's manifested stay, none of us ever initiated anyone. In fact, even after his passing, when the Society continued under the guidance of Om Visnupada Sri Srimad Bhaktivedanta Vamana Gosvami Maharaja, Srila Bhaktivedanta Trivikrama Maharaja, and myself, although there were many qualified devotees, except for the president, Srila Vamana Maharaja, no one gave initiation for several years.

To initiate is a very weighty responsibility. Still, to continue the strict line of our Sampradaya, we are doing so. I have permitted my disciples like Madhava Maharaja, Tirtha Maharaja, Aranya Maharaja, and others to give mala. If they try to give initiations however, then after some time their disciples will have no honor for them, and they will also try to initiate prematurely. So this is not a good process. Therefore, I think it best to pass this resolution: if I am not going to travel to the country of the persons desiring initiation, even in the future, then senior devotees can give japa mala on my behalf. But they should follow the proper process. As far as initiation is concerned, I will give that by phone and by an 'authority-letter', telling the aspiring devotee, "I am accepting you." After that, when my preachers are in their countries, they will give them japa and kanti-mala (neck beads).

I know that my sannyasi disciples, like Madhava Maharaja, Tirtha Maharaja, Vana Maharaja, Padmanabha Maharaja, Bhaktisar Maharaja, Aranya Maharaja, or Asrama Maharaja are not desirous to be guru, acarya, while I am still physically present in this world. I have told them that that they should take japa and kanti-mala with them when they travel to those places in which I will probably never be able to go. They should not try to be acarya, however, thinking that they themselves are giving initiation. This mood should not be there; otherwise it will be very bad for them, not for me. I will give initiation by phone and by letter, and I will chant on the beads of the new initiates. Then, any senior and responsible devotee should give the new initiates their mala and whatever else is necessary.

[Brajanatha dasa:] Also, Gurudeva, sometimes they are giving names. This is not proper.

[Srila Narayana Maharaja:] The policy should be that I will give the new initiates' names by telephone and by letter. Phones are now available everywhere.

[Brajanatha dasa:] Yes, and also Internet. I think everyone agrees with this resolution. Are there are any comments?

[Pancali dasi:] I would like to say that I was initiated in that way by Srila Prabhupada.

[Srila Narayana Maharaja:] Yes. Very good. Thank you. I should follow his example.

[Sripad Brajanatha then reported on the remaining topics of that morning meeting.]

[Srila Narayana Maharaja:] The present age is Kali, the age of quarreling without any reason. I therefore request you all, especially the sannyasis and brahmacaris, to be very humble. We should not quarrel among ourselves. If we are always humble and polite, we can preach everywhere, and that preaching will be stable. Otherwise, this will not be possible. We can conquer any heart by love and affection; not by control. Don't quarrel. Peacefully discuss all subjects among yourselves. If you cannot do so, then come to me and I will try to reconcile everything. Don't, in any way, have any contest or quarrel among yourselves.