The Means To The Ends 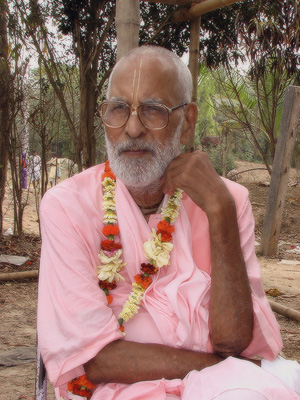 [Usually on his Western tours, Srila Narayana Maharaja speaks on a different theme in each country or city. During the 2002 summer tour, however, he discussed the same theme and the same verses of Raya Ramananda Samvad in two countries. Raya Ramananda Samvad is the conversation between Caitanya Mahaprabhu and His associate Raya Ramananda, regarding various conceptions of the ultimate goal of life. The following is a transcription of one of those lectures:]

Ramananda Raya continued, "According to the Bhagavad-gita, 'One who is thus transcendentally situated at once realizes the Supreme Brahman and becomes fully joyful. He never laments or desires to have anything. He is equally disposed toward every living entity. In that state he attains pure devotional service unto me."

What are the symptoms of a person who is situated in the stage of brahma-bhutah? He is not affected by birth, or death, or by worldly sufferings. He is always happy because he never feels that he is in want of anything.

We have desires, but one on the platform of brahma-bhutah doesn't have any worldly desires. Na kanksati. He never desires anything. Na socati. Even if all his possessions are destroyed, he never laments. Samah sarvesu bhutesu. He considers that all souls are brahma, spirit, not matter, and therefore all are equal. The atma is the same in the body of an elephant, a cow, a hog, or a dog, because all are brahma. Mad-bhaktim labhate param; if one does not offend any grantha (book) bhagavat, like Srimad Bhagavatam, or any bhakta bhagavata, a mahabhagavata Vaisnava,it may be that Krsna will arrange a high class of association for him. Then, under the guidance of such association, he will gradually attain para-bhakti, meaning prema-bhakti.

There are two kinds of persons in the category of brahma-bhutah, and they are the brahmavadi, and the mayavadi. The mayavadi lives in places like Haradwar and Kasi. They only chant and remember, "Aham brahmasmi," and they are offenders of sastra. They don't like to hear Srimad Bhagavatam, Bhagavad-gita, or any other Vedic scripture. They are against pure bhaktas, and therefore they will not attain para-bhakti. On the other hand, there are there are many brahmavadis who live in Vrndavana. They want mukti, salvation, but they do not commit offences to Srimad Bhagavatam.

Their goal is mukti, but they like to read the sweet pastimes of Krsna and they chant, "Hare Krsna, Hare Krsna." This type of person, who lives in Vrndavana, or Puri Dhama, or elsewhere, who likes to hear and to explain the sweet pastimes of Krsna, will attain para-bhakti very quickly. There is a condition however. They can only achieve para-bhakti if they associate with pure devotees and if they follow the correct process.

Rejecting this, Mahaprabhu said, "Eho bahya; this is also external." He said this because that conception is mixed with impersonal jnana. One desires salvation, to merge with Krsna, Paramatma, brahma, or the rays of brahma. This is not the pure religion of the atma, and therefore Caitanya Mahaprabhu told Raya Ramananda, "This is external; you should go on to something better. Then, "Raya kahe." Ramananda Raya replied, "Jnana-sunya bhakti sadhya-sara." Giving an example from the Brahma-vimohan-lila in the 10th Canto of Srimad Bhagavatam, Ramananda Raya quoted the prayer of Brahma after he had stolen Krsna's cows:

[Ramananda Raya continued, "Lord Brahma said, `My dear Lord, those devotees who have thrown away the impersonal conception of the Absolute Truth and have therefore abandoned discussing empiric philosophical truths, should hear from self-realized devotees about Your holy name, form, pastimes and qualities. They should completely follow the principles of devotional service and remain free from illicit sex, gambling, intoxication and animal slaughter. Surrendering themselves fully with body, words and mind, they can live in any asrama or social status. Indeed, You are conquered by such persons, although You are always unconquerable.'"

Here, Srila Bhaktivedanta Swami Maharaja, my revered siksa-guru, has explained the meaning briefly; and elsewhere, other acaryas like Sri Sanatana Gosvami in Vaisnava-tosani, Jiva Gosvami in Laghu-tosani, and Srila Visvanatha Cakravarti Thakura in his Dig Darsani Tika, have explained it more elaborately and with very deep meaning. I am now giving the essence of those explanations.

Jnane prayasam udapasya namanta eva. There are two kinds of knowledge: one is the conception of mixing in brahma, and its followers chant, "Aham brahmasmi," I am brahma, the supreme spirit, the impersonal God, and all are brahma." The goal of their meditation is to mix into brahma and to become brahma. The second type of knowledge is called tattva-jnana, and it is the conception that we are all parts and parcels of Krsna and He is the Supreme Lord. He is sarva-saktiman, the possessor of all powers, and He is full with all opulence. He can create millions of universes in a moment, and again, in a moment, He can also destroy those universes. This is tattva-jnana.

There are many kinds of jnana, like tat-padartha jnana (the knowledge regarding Krsna's bhagavata or Godhood), tvam-padartha jnana (the knowledge of the jiva's infinitesimal nature and his relationship with bhagavan), and jiva-brahma-aikya jnana (the misconception that the jiva and the supreme brahma are one in all respects), and they have been explained in great detail in sastra. Impersonal knowledge is not appreciated in Srimad Bhagavatam, and Srila Vyasadeva and Sri Sukadeva Gosvami have refuted impersonal jnana throughout Srimad Bhagavatam and other scriptures. What to speak of "tat-tvam asi" jnana and "aham brahmasmi" jnana, even the tattva-jnana that Krsna is the supreme Lord and the creator - not that He Himself creates, but that He gives the order to His subordinates and they then create and destroy millions of universes in a moment - must ultimately be discarded. Jnane preyasam udapasya. Don't endeavor for that.

Although it is possible for Krsna, the conceptions of aisvarya and madhurya cannot exist simultaneously for devotees. When Krsna showed Arjuna His universal form on the battlefield during the Mahabharata war, Arjuna became perplexed and began to pray with folded hands, " I have made many mistakes. I have done wrong. I have called You 'sakha,' friend, and You are also personally driving my chariot. Prabhu, excuse me for this. Now I know that You are the creator of this universe. You are the Supreme Lord." Arjuna now forgot his friendship with Krsna, and he repented his previous actions and mentality. On the other hand, when Mother Yasoda saw the universal form in Krsna's mouth, she was puzzled and thought, "Why is my boy like this? A ghost may have come." Overwhelmed by vatsalya-prema, she called for the brahmanas and also for Nanda Baba. The brahmanas told her, "We will quickly purify Him." Then, after fetching black cows for a yajna, the brahmanas procured urine and cow dung, mixed them together, and applied it on the body of Krsna.

Jnane prayasam udapasya namanta eva. For those of you who are somewhat advanced, don't endeavor to practice in this way - to know that Krsna is the Supreme Lord. You should go to the assembly of pure Vaisnavas like Sri Sukadeva Gosvami, where hari-katha is flowing automatically, like a stream, or a fountain, or a waterfall.

["My dear King, in the place where pure devotees live, following the rules and regulations and thus purely conscious and engaged with great eagerness in hearing and chanting the glories of the Supreme Personality of Godhead, in that place if one gets a chance to hear their constant flow of nectar, which is exactly like the waves of a river, one will forget the necessities of life - namely hunger and thirst - and become immune to all kinds of fear, lamentation and illusion."]

We have heard that Srila Bhaktisiddhanta Sarasvati Gosvami Thakura Prabhupada would explain sastra for hours and hours, And even a child like Madhumangala (the five-year-old son of Sripad Ramsraddha dasa who was present in Srila Maharaja's class) and other children would come to faithfully listen to his continuous discourses. Tasmin mahan mukharita. The sweet pastimes of Krsna flow automatically from the mouth of the pure devotee, just like a stream of honey. Even if no one in his audience has asked him questions, the flow of nectar still comes from his mouth.

Questions After Class
What Do The Vrajavasis Know?
Holland: June 28, 2002 (pm)

[The following questions were asked at the end of Srila Maharaja's class entitled "The Means to the Ends".]

[Question:] In the middle of your class you were explaining that none of the Vrajavasis know, or believe, that Krsna is the Supreme Lord.

[Question:] Someone who doubted that principle once asked you, "What about the pastime in which Krsna became Visnu and Radhika became Laksmi?" You replied, "No. There's a deep meaning there"

[Srila Narayana Maharaja:] This was a play.

[Question:] Could you please explain further?

[Srila Narayana Maharaja:] It was only a play. No associates - even the grasses, creepers, parrots and birds, what to speak of any Vrajavasi like Nanda Baba or Yasoda Ma - ever believe that Krsna is the Supreme Lord. Krsna may be the Supreme Lord, the Lord of lords. He may be; but to the Vrajavasis Krsna is a friend, a son, or a beloved - only this.

[Question:] So they were playing a game?

[Srila Narayana Maharaja:] Yes, for apne mano-ranjana; it was for the recreation and entertainment of Radha and Krsna, and the gopis. But actually they do not know. They are more than Brahma, Sankara, and even Narada. They can teach Narada bhakti, but still they don't know that Krsna is the Supreme Lord. Even if anyone says that He is, a Vrajavasi will reply sarcastically, "Oh yes, you are right. Be right. Very good. If He is the Supreme Lord, then I want that bhakti should be done to His lotus feet." Then bas; nothing is felt regarding Krsna's being God, and nothing is said further.