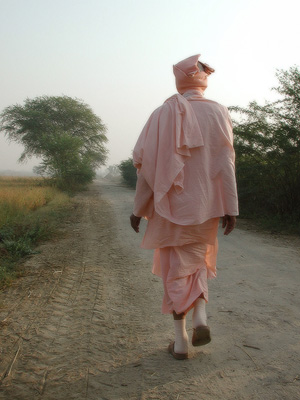 His disappearance day festival was observed in grandeur as usual, at the Sri Rupa-Sanatana Gaudiya Matha in Seva kunja, Vrndavana, and it was attended by about 600 devotees from India and around the world. On the auspicious occasion, the altar of Sri Sri Radha-Vinodabihariji was beautifully decorated with perfuse and elaborate flower arrangements. The Deities themselves, that is, Sri Caitanya Mahaprabhu, Radha and Krsna, and Sri Vrnda devi, were effulgent in their shimmering and unearthly gorgeous violet outfits with golden crowns and ornaments, and they were opulently bedecked with lush flower garlands of orange and yellow marigolds punctuated with deep red roses.

The devotees assembled the Matha at 10:00 AM and sang bhajanas and vandana to Sri Guru, Sri Vaisnavas, Sri Sri Gaura-Nitai, and Sri Sri Radha-Vinodabihari. They were also decorated, with feelings of separation, longing, and anticipation, waiting their appointment with Srila Narayana Maharaja on the phone. In his naravata-lila (human-like pastimes) he had suffered a heart attack in Calcutta two weeks earlier and was now recovering after an operation (angioplasty surgery) in Delhi*[See Endnote 1]. He would not be physically present with the devotees that day, although most of them had just traveled thousands of miles to be with him. Sripad Brajanatha dasa and Pujyapada Madhava Maharaja had arranged with Srila Narayana Maharaja that he would speak to the devotees by phone and the temple phone was now connected with a speaker system. Then, at about 11:30am, after Sripad Bhaktivedanta Tirtha Maharaja, Bhaktivedanta Sadhu Maharaja, Bhaktivedanta Padmanava Maharaja spoke their offerings unto the lotus feet of Srila Bhaktiprajnana Gosvami Maharaja, Srila Narayana Maharaja's voice appeared and began to resound throughout the large temple-room. Several devotees began to cry silently as soon as they heard his voice, and others began to do so during his five-minute talk*[See Endnote 2].

His voice trembling due to intense feelings of love in separation for his Guru Maharaja, Srila Narayana Maharaja began: "Om ajnanam timirandasya jnananjana salakaya, chaksus unmilitam yena, tasmai srigurave namah. I offer millions of obeisances unto the lotus feet of my divine Gurudeva, nitya-lila pravista on visnupada sri srimad Bhaktiprajnana Kesava Gosvami Maharaja. I was suffering in the endless chain of birth and death; I was in a depthless well of suffering and sorrow, but my Gurudeva, Om Visnupada Sri Srimad Bhaktiprajnana Kesava Gosvami Maharaja picked me up by his causeless mercy and dragged me from there.

"When my Gurudeva was in this world, I could not realize his glories, but now I am realizing them. I am very unqualified and unworthy, and I am without knowledge of any Western languages besides a little English. Still, due to the very small amount of service I rendered to the lotus feet of my Gurudeva, you see that so many devotees throughout the world are hearing from me. Also, I am writing volumes of books, and when I read those very same books, I am in great wonder how they could have come from my hand and heart. In this way, by the causeless mercy of my Gurudeva, I am realizing all the glories of Srila Rupa Gosvami, Srila Raghunatha dasa Gosvami, and Sri Caitanya Mahaprabhu; I am also realizing the verse:

[May the Supreme Lord who is known as the son of Srimati Saci-devi be transcendentally situated in the innermost chambers of your heart. Resplendent with the radiance of molten gold, He has appeared in the Age of Kali by His causeless mercy to bestow what no incarnation has ever offered before: the most sublime and radiant mellow of devotional service, the mellow of conjugal love.]

"O how glorious it is that Krsna took the intrinsic mood of Radhika and became Sri Sacinandana Gaurahari. He is the combined and causeless mercy of Krsna and Radhika. I am now realizing Their glory only by the causeless mercy of my Gurudeva.

"I want to say one more thing: Tell the devotees throughout world that now I am quite okay. I went to Navadvipa and Calcutta in Bengal, only to pay respects to my siksa-gurus, Parama-pujyapada Srila Bhaktivedanta Vamana Maharaja and Parama-pujyapada Srila Bhaktivedanta Trivikrama Maharaja because they were both in the hospital. When I arrived I took some of their suffering and I was thus admitted in the hospital. They were both discharged and are now well.

"Something became wrong with my heart at that time, but by the mercy of Sri Krsna Caitanya the entire problem was removed. Tomorrow I will be discharged, and after six or seven days I will join you all and be with you for parikrama. No one should worry or feel hopeless. I am remembering you all and I want to be in your midst. Tell everyone not to worry.

Following the phone conversation more devotees offered their sraddha puspanjali words of glorification, and after that the devotees participated in the noon arati and offering of flowers (representing their hearts) to their parama-gurudeva, paramaradya Sri Srimad Bhaktiprajnana Kesava Gosvami Maharaja.

[*Endnote 1 - "A Vaisnava is always protected by the Supreme Personality of Godhead, but if he appears to be an invalid, this gives a chance to his disciples to serve him." (Caitanya-caritamrta Adi 9.11 purp.)]

[*Endnote 2 - The following is a quote from a class given by Srila Maharaja about ten years earlier, on the subject of feelings of separation from Sri Gurudeva: "Although our Gurudeva has also entered his aprakata-lila, we remain in this world in a very pleasant manner. On special days, his avirbhava (appearance day) and tirobhava (disappearance day), the occasion comes that we may remember him. At that time, however, we are involved in arranging the utsava, festival. There is very little chance to realize that separation. Only while we are speaking something about him, a drop of tear may come in our eyes - and it may not come. If the festival is very elaborate, there will be no tears. So many functions must be managed, such as the abhiseka, puja, and distribution of maha-prasadam to Vaisnavas. We arrange these festivals mainly for the people in general, for those who have no intimate relation with him. But we should do something so that a feeling of separation will come within our own hearts, and that is called bhajana.

Who will feel separation? Those special persons who have realized their immense obligation and indebtedness to Gurudeva for all they have received, and who have rendered much service to him with visrambha-bhava, intimacy. They will weep. The consideration that, "I'm so low and my Gurudeva is in such a high stage" will not be there. Awe and reverence will not be there; otherwise one cannot weep. In sastra it is said, visrambhena guror seva - the sevaka performs such intimate service to gurudeva that gurudeva remains always pleased with him. The guru will not consider for even a moment that, "He is my servant and disciple." Instead he will feel that, "He is my heart." Sri Isvara Puripada, the disciple of Srila Madhavendra Puri, and Govinda, the disciple of Isvara Puri, were servants of this caliber. Although this is a rare relationship, it is absolutely necessary for raganuga-bhakti. Without a relationship like this, we cannot weep like Srila Raghunatha dasa Gosvami.

Separation from gurudeva will be experienced on different levels. When we consider how merciful he was and how much greater he is than ourselves, we feel a certain type of sentiment. However, when we remember how near and dear he was and how much he loved us, then we will weep profusely for him.