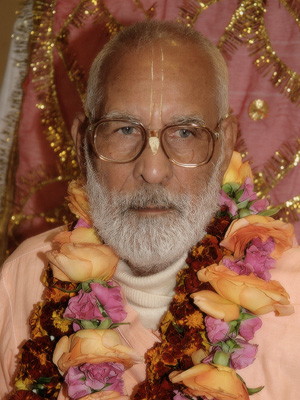 [Twenty-two thousand pilgrims, both Indian and Western, attended the Mar23-Mar29 Navadvipa Dhama Parikrama of the Sri Devananda Gaudiya Matha. Headed by Tridandiswami Sri Srimad Bhaktivedanta Narayana Gosvami Maharaja, this most dynamic parikrama visited the Samadhi and bhajana-kutira of Srila Jagannatha dasa Babaji Maharaja, and the residence of Praudhamaya and Vrddha-Siva, on the island of Koladvipa, on March 24th. Somehow, all the pilgrims were able to fit comfortably in the large sunny field just outside the Samadhi, and there, on the western side of the Ganga, Srila Maharaja gave the following talk on the glories of Praudhyamaya:]

By His own potency, Krsna makes Himself bewildered. By the influence of Yogamaya, Mother Yasoda never knows that her son is Parambrahma, the Supreme Personality of Godhead, endowed with all opulence. Even Brahma knows, so why should Krsna, His friends, and Mother Yasoda not know that He is God? Is Krsna and Mother Yasoda less than Brahma? Here is the role of Yogamaya. It is she who makes Krsna's naravata-lila (human like pastimes) possible.

When Krsna is a little baby, He cannot turn over on His bed by His own endeavor. When Mother Yasoda turns Him over, He feels so much pleasure and she also feels so much pleasure. She thinks, "Today my son did this and that" or, "Today My son stole butter in so many gopis' houses." She tries to bind Krsna, but after tying together the ropes from all the gopis houses, the combined ropes are still two fingers too short. Krsna's stomach is only 12 fingers wide, but still the ropes from all those houses cannot bind Him. Finally, when He is bound by the small rope from Mother Yasoda hair, we find that this Parambrahma is crying. This Parambrahma, who can devastate unlimited universes, is now crying. This crying of Krsna is natural and it is part of His lila. It is not a drama. Due to Yogamaya, He is actually mugdha, bewildered, not knowing anything. Who is not allowing Mother Yasoda to bind Krsna? It is Yogamaya. When that same Yogamaya sees Mother Yasoda's hard labor, she allows her to bind Him. This is the role of Praudhamaya, Yogamaya.

Who is Praudhamaya? Just after Krsna took birth from Mother Yasoda's womb, she gave birth to His sister, Yogamaya. This is Praudhamaya, a manifestation of Krsna's antaranga-svarupa-sakti. The root or complete internal svarupa-sakti, transcendental energy, is Radharani. Srimati Radharani becomes samvit, sandini, and hladini in order to fulfill different functions and activities. Sandini is His existence potency, Hladini-sakti fulfills all His desires, and Samvit-sakti manifests all tattva-jnana, all the way up to madanakhya-mahabhava. All bhavas expand from samvit-sakti. The Lord and His svarupa-sakti are the same. They are non-different.

Yogamaya has two features. One is called Unmukha-mohini, and she attracts Krsna and all His parikaras (associates). Even though Krsna is omnipresent and omnipotent, still she deludes Him and makes Him mugdha. How can He be bewildered? This is possible because He is the reservoir of all contradictory dharma's. Nothing is impossible for Him. On one hand He is nirguna, without any (material) qualities, and on the other hand He has all qualities and is always full of all opulence.

Apart from being endowed with opulence, Krsna has another side, and that is His madhurya side. His madhurya lilas are those which do not violate the human level of possibility. Those lilas that are para-laukika, not possible for any living entity to do, are His opulent or His aisvarya lilas. In this way, Krsna is omnipotent and mugdha at the same time. He is the Lord of lords, the origin of all incarnations, and at the same time He is Vrajendranandana. This is possible because He is endowed with aghatana-ghatana patiyasi-sakti, that power which makes the impossible possible. Yogamaya is that power.

The gopis worshiped the demigoddess Katyayani in order to get Krsna as their husband. That Katyayani, who was worshiped by the kanya-kumari gopi-gana, is a partial manifestation of Yogamaya, who is a partial manifestation of Srimati Radhika. If we worship Srimati Radhika, the worship of all Her manifestations is perfect. If we worship Sri Caitanya Mahaprabhu, then Krsna is worshiped with Radhika and all others. Therefore, Praudhamaya manifests here in Navadvipa and serves Sacinandana Gaurahari.

Whereas Kamsa had no faith in Krsna, Vasudeva, Krsna's father, had faith in Him. He knew that Kamsa would not be able to kill Devaki, but still he desired to be the via media for saving her. Later, when Kamsa picked up Yogamaya from the hands of Devaki, Yogamaya immediately became Mahamaya for him. When he was about to throw her on the rock, she flew up into the sky and chastised him. Those who are averse to Krsna, like Kamsa, can only touch Mahamaya ö not Yogamaya. The word Maya consists of the two syllables, 'ma' and 'ya.' Ma-ya means that which is not what we think it is. All relationships in this world are not what we think they are. They are false; they are not eternal. We think that whatever pertains to the body is real, but it is not. Srila Bhaktivinoda Thakura has therefore sung, "Grhe thake, vane thake. In whatever asrama of life you are situated, chant, 'Ha Gauranga.'"

Mahamaya is the shadow of Praudhamaya. That same Praudhamaya becomes Mahamaya to those who are averse to Krsna. Mahamaya covers our svarupa, and for this reason everyone thinks, "I am a king," or "I am a demigod."

In Vrndavana, Yogamaya is Paurnamasi:

"I bow my head and offer pranama unto Sri Paurnamasi devi, who is completely adept at arranging the most elevated varieties of enjoyment for Srimati Radhika, the mistress of Krsna. Her lotus feet are worshiped by the Vrajavasis and, due to possessing the entirety of transcendental qualities starting with kindness, she is worshipable to everyone in the entire universe."

"I offer pranama to the lotus feet of Sri Paurnamasi-devi, who is Bhagavan's yogamaya-sakti. She expands pure prema-bhakti for the feet of Sri Radha-Krsna, and her mind is always immersed in the ocean of Krsna's pastimes. I pray that she will immerse me also in those pastimes."

Siva means auspicious. Siva deludes those who are averse to Krsna, and He is favorable to and helps those who are His devotees. Sankara-tattva or Siva-tattva is very complex. He is not Visnu, nor is he a jiva. He is not maya-tattva, but he is not beyond maya-tattva. As Sada-Siva he is Visnu-tattva. As Visnu-tattva he is svamsa, a plenary portion of Krsna. Also, when Krsna incarnates in the three modes of nature, Siva is the predominating deity of tama-guna, the mode of ignorance. Brahma Samhita states that Siva is a combination of tama-guna, the quality of minuteness of the marginal potency, and a minute degree of the mixture of Samvit and Hladini.