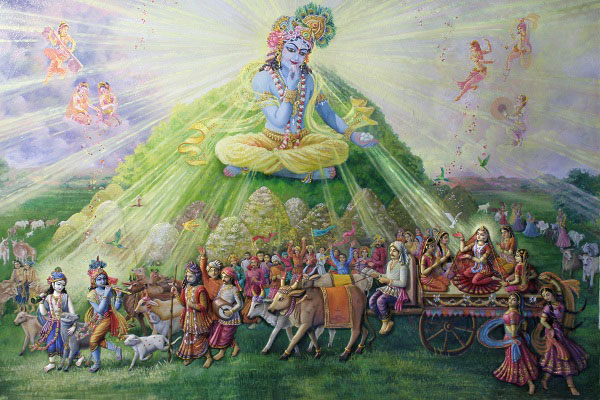 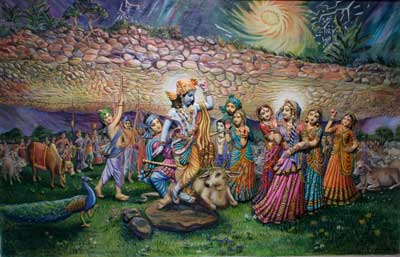 Today, Annakuta Mohotsava, is a very auspicious day. This day is observed in India during the month of Kartika. Many of Krsna's other sweet pastimes were also performed in the month of Kartika. In this month, under the guidance of Nanda Baba, the Vrajavasis observed Govardhana puja. They did this, having given up the puja of Indradeva, and that resulted in Krsna lifting Govardhana Hill on His little finger. Yasoda-devi bound Krsna in this very month, which is how the song Sri Damodarastakam originated. Kartika is also the month in which Krsna and the gopis performed Saradiya Rasa (Autumn rasa-lila). 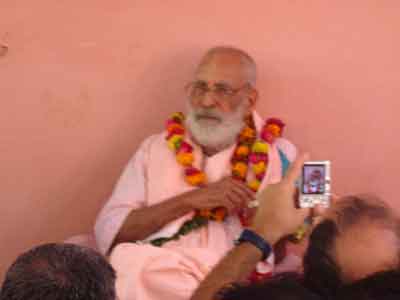 After Krsna lifted Giri Govardhana, Indra understood that his torrential rain would have no effect, and thus he began to repent his actions. He thought that Krsna would punish him, and that the only way to save himself would be to take shelter of Surabhi cow. Surabhi would be able to please Krsna. She would pray to Krsna on his behalf, "Please, excuse him." No one else would be able to achieve this. Krsna considers Himself the servant of the cows and always supports them. It would therefore be easy for Surabhi to please Him. If Surabhi would not go, Krsna would not be pacified and would therefore punish him. Indra thus took shelter of Surabhi, walking behind her, and they both approached Krsna. Krsna said, "O Mother, you have come!" Surabhi said, "Yes. I have brought my son with me. I request that You please excuse him." Surabhi then began to supply large quantities of milk, and Indra, the demigods, and the great sages present began to abhisheka (bathe) Krsna, just as we did here today. Krsna then became very happy and said, "In the future I don't want to have to tolerate your nonsense activities. For your own good you should go to Navadvipa, and there, in the company of Surabhi, perform austerities. In that way you will be excused." Indra thus understood that Krsna was the Supreme Personality of Godhead. 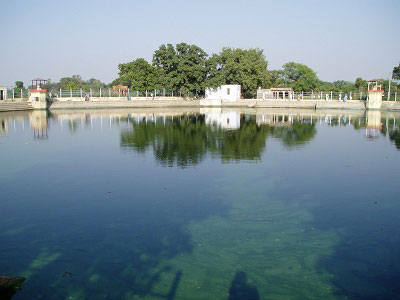 Govinda KundaUp until the time of that abhiseka, Krsna was known as Yasoda-nandana and Nanda-nandana Krsna. Now, He would also be known as Govinda. Go indicates gopa, gopi, go (cow), govatsa (calf) and Veda. Krsna gives pleasure to all these gos and He also protects them; therefore His name is Govinda. Govinda and Govardhana are in the same line: He has the same duty, the same function, as Giriraja Govardhana (vardana means to nourish).

Now our Govardhana-puja is completed. Giriraja is Krsna Himself; and moreover, He has come from the heart of Radhika. He can fulfill our every desire very easily, and he can even give krsna-prema. He very rarely does so, but he can.

We should also remember that the Annakuta Mohotsava was also performed by Srila Madhavendra Puripada, as we saw in the drama play. Madhavavendra Puri went to Vrajabumi,Vrndavana, and there he stayed on the banks of Govinda-kunda at Govardhana. One day, after taking his bath, he sat beneath a tree on the banks of Govinda-Kunda. Krsna came there in the form of a cowherd boy and said to him, "Oh, why you sitting here, starving. No one starves here. My mother has sent some milk. Please drink it." 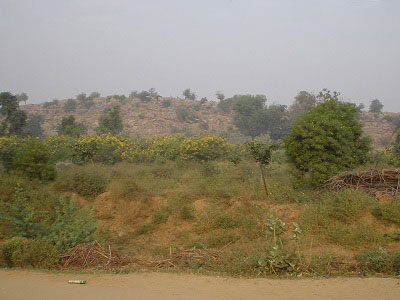 Madhavendra Puri thought, "Throughout my entire life I have never been attracted by any human, and especially to any lady, but now I am attracted to this boy. Who is He?" He took the milk and he began to weep, his heart melting. Then he cried, "Oh! That cowherd boy was actually Krsna, and now He has left me." And he wept bitterly.

In the last part of the night Madhavavendra Puri had a dream. In that dream he saw that same boy, that very Gopala, come to him and say, "I have been here, waiting in this bush for you for a very long time; and now you have come. I'm feeling very hungry and very hot. Please make a temple for Me, and perform My abhiseka ceremony and Annakuta festival (festival in which there is cooked rice that is stacked like a small mountain) so that I shall feel satisfied." When Madhavavendra Puri awoke, he fixed his mind on executing the order of the Lord. After his morning bath he gathered some of the villagers and together they went to the kunja where Gopala was waiting and that kunja is still there today, nearby Govardhana. After clearing away the thick bushes, they very easily dug Him out and took Him to the top of Govardhana Hill. They erected a throne from stones there – one piece for the seat and one to support Him from behind. Then they began to worship Him.

Annakuta was performed for several months. Many wealthy persons from Mathura heard that Gopala had arrived and they became very happy. They brought all types of paraphernalia, such as gold, cloth, scents and bhoga. Cooking was performed for Thakurji daily, and for many months lakhs and lakhs of people honored the maha-prasadam of Gopala at that place.

After 2 years Gopala again came in a dream to Madhavavendra Puri and said, "I'm satisfied by taking all of your offerings, but My body is still hot. Can you bring malaya-candana sandalwood from Jagannath Puri?" Thus, Madhavavendra Puri once again set off to fulfill the desires of the Lord. 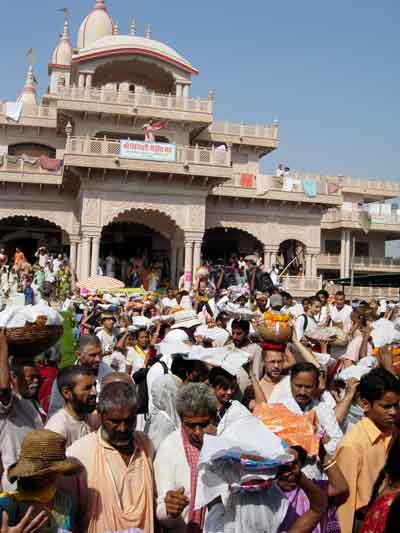 In Vrndavana we worship Govardhana with many pounds, not only a little, of milk, ghee, and yogurt, with many types of preparations – even more than here in Badger. Many of you have been to our Kartika-vrata and have personally seen this festival. We are fortunate to take part. We will continue to perform this festival every year; and we will do so until our life in this world is over. We cannot obtain pure bhakti without the mercy of Govardhana.

Many sweet pastimes take place at Govardhana. For example, Srimati Radhika, Lalita and Visakha and the other gopis are on their way to the fire sacrifice of Bhaguri Rsi. During their journey there is a discussion with Krsna. Krsna wants to check them and make them pay a toll tax, the gopis defeat Him, and He has to apologize. There is so much history there, and it is all coming in our mind and hearts.

Wherever you are, you can worship Giriraja by mind and pray:

"May Govardhana Hill fulfill my deepest desire – to get darsana of Sri Radha and Krsna's lilas. By Sri Krsna's mercy Govardhana became the emperor of all mountains, and received the offerings meant for Indra despite Indra's enmity."

"Demanding a road tax, Krsna quarreled for several hours at Dan Ghati with the daughter of Vrsabhanu Maharaja. Rasika-bhaktas visiting Govardhana are eager to listen to that sweet prema quarrel. May that Govardhana fulfill my desire that I also can hear that verbal battle." (Sri Govardhanastakam, verse 3)

These prayers will do as much for you as worshipping Govardhana Himself, because there are many moods contained within them. Try to pray in this way. This is bhajana.