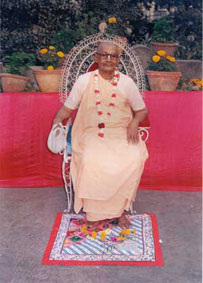 Printed from the book Sri Prabhandavali, A Collection of Devotional Essays
by Srila Bhaktivedanta Narayana Maharaja

Vyasa is the personality who delineated the glories of the names, form, qualities and pastimes of Bhagavan in this world. The ceremony to honour the acarya who, sitting on a throne in the service of Bhagavan, preaches His glories and attracts people towards Him is called Vyasa-puja. Another name for Vyasa-puja is guru-puja. In India, the general convention is that guru-puja is observed on the day of Guru-purnima. It is considered Vyasa’s appearance day, and on that day all sampradayas worship their respective gurus. But in accordance with the scriptures, the primary acarya of modern times, Sri Srimad Bhaktisiddhanta Sarasvati Gosvami Prabhupada, established special worship of the guru on that guru’s own specific appearance day. Real guru-puja is when, on his appearance day, the guru worships his whole guru-parampara and instructs his disciples on how to do the same.In the scriptures, the glories of the guru have been described extensively. Srila Visvanatha Cakravarti Thakura has written:

One should know the guru as the açraya-vigraha and non-different from Me. One should never disrespect him or attribute faults to him by perceiving him with material vision, for he is the embodiment of all the demigods.

There are numerous demigods and goddesses, and amongst them Brahma, Visnu and Mahesa are primary. The guru is the embodiment of Brahma, the embodiment of Visnu, and also the embodiment of Mahesa. He is compared to Brahma because just as Brahma creates this world, the guru creates bhakti by sowing the seed of devotion in our hearts. Visnu is the maintainer, and gurudeva is he who maintains our bhakti. As long as we haven’t attained the stage of prema, he continues to strengthen our devotion. As conditioned souls, we cannot even imagine how much endeavour he makes for even one disciple. And as Mahesa is the destroyer, the guru destroys all of our anarthas and aparadhas. This is why the guru is said to be the embodiment of all the demigods.

There are so many jivas in this world, and although some are inclined towards Bhagavan, most are averse to Him. Their intrinsic forms are as eternal servants of Krsna, but forgetting this, they are wandering in material existence. 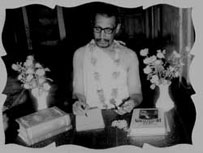 Without bhakti they will never possess any auspiciousness. Therefore sometimes Krsna Himself descends into this world, sometimes He assumes different incarnations, and sometimes He sends His sakti in the form of the guru. Otherwise it would be impossible for the jivas to ever receive auspiciousness. Only by bhakti can they attain their ultimate good fortune; yet bhakti is not a thing of this world. Inside the eternally perfected associates of Krsna, the essence of the samvit- and hladini-saktis is always present in the form of prema-bhakti. Until the jiva receives that essence, he will not possess any real auspiciousness. The guru is a resident of the spiritual world, and he descends into this world. He brings the prema of Goloka Vraja to this world and bestows it upon the conditioned souls. Such a great personality, an eternally perfected ragatmika devotee who possesses vraja-prema and brings it to this world, is known as a suddha-guru.

As the current of the Ganga carries water from the Himalayas down to the ocean, there is a current flowing through our guru-parampara which, beginning from Krsna Himself, has come down to the modern acaryas and is presently flooding the entire material world with Krsna-prema. This is the primary function of the guru. If someone is not able to give this prema, then he is not really a guru at all. Being capable of bestowing Krsna-prema is the primary attribute of a genuine Vaisnava guru.

Today is the appearance day of such a guru, Sri Srimad Bhaktivedanta Vamana Maharaja, who serves as the present acarya of the Sri Gaudiya Vedanta Samiti. He took birth in 1916 in the district of Jessore in East Bengal, which is now Bangladesh. His boyhood name was Santosa, and his paternal uncle was one of Srila Bhaktisiddhanta Prabhupada’s first disciples, Nrsimha Maharaja. Vamana Maharaja’s mother was also a disciple of Prabhupada, and she was very strict; she would even discipline her husband. If her husband had been eating any prohibited food, she would not allow him to enter the house, and she disciplined the children in the same manner. Vamana Maharaja was the oldest of her four sons, and she was very concerned about him being influenced by his father. So when Vamana Maharaja was only nine years old, she took him to Prabhupada’s matha in Mayapura where Nrsimha Maharaja was already staying. When they arrived there, Nrsimha Maharaja led them to our gurudeva, Srila Bhakti Prajnana Kesava Maharaja, who was the temple commander at that time. Residing in the maöha from that day on, Vamana Maharaja received harinama initiation directly from Prabhupada and has remained a lifelong naisthika-brahmacari.

Our Guru Maharaja immediately put Vamana Maharaja in school and would say to him, “I will give you some chocolate if you will recite just one sloka for me.” In this way he learned many slokas, and Gurudeva was always extremely affectionate to him. At that young age Vamana Maharaja learned how to seat Vaisnavas for taking prasada by giving them a leaf to eat from and some salt and water. And after all the Vaisnavas had finished taking prasada he would clean everything. He also learned how to cook there, and he could very quickly prepare first-class offerings.

After some time Prabhupada departed from this world, and then our Guru Maharaja established the Gaudiya Vedanta Samiti in 1943. I joined the mission in 1946, and at that time I saw how Vamana Maharaja was doing everything: writing letters, managing the temple, cooking, and travelling for preaching. Together with my godbrother Srila Trivikrama Maharaja, we received sannyasa from Guru Maharaja on Gaura-purnima in 1954. Vamana Maharaja is a great scholar just as our gurudeva was. It has been said that he is like a dictionary of slokas because he knows so many verses from the scriptures. When while lecturing Gurudeva would sometimes forget a slokas, Vamana Maharaja would always supply it from memory. Once, when we went to Assam for preaching, Gurudeva boldly declared that the mouths of the people there who ate meat and fish were like the drains of sewers. One of the sects there was virtually prepared to stone us, and they challenged us by saying, “You say that Caitanya Mahaprabhu is Bhagavan Himself, but what evidence is there of this?” Guru Maharaja turned to Vamana Maharaja and said, “Speak.” Then Vamana Maharaja recited fifty slokas one after the other from different scriptures as evidence, and those people were silenced.

Guru Maharaja placed the entire responsibility of editing and publishing our Bengali magazine exclusively upon Vamana Maharaja. From his boyhood Vamana Maharaja studied Bhagavatam verses and their commentaries, and as a result he can speak on Vaisnava philosophy for hours without stopping. He is such a great scholar, and he is a very sweet person as well. With children he is very affectionate, and he speaks with them concerning things like ghosts that they enjoy hearing about. He attracts everyone to spiritual life, and even in an assembly of scholars, he is always the greatest scholar. He refutes others’ misconceptions, but he does it in such a way that their feelings are not hurt, as if carefully performing a surgical operation.

Vamana Maharaja is very grave and quiet, and there is another special quality that he possesses: I have seen many people, myself included, who give explanations from the scriptures and enjoy taking praise from others for it. But having known Vamana Maharaja for almost fifty years, I have never seen him do this, not even by accident. He is also very tolerant. As if taking poison and digesting it, he may see the faults in others, but he never speaks about them. He has so much eagerness to preach the instructions of Caitanya Mahaprabhu, and he has preached in all the villages of West Bengal and Assam. Bhagavan has especially empowered this great personality with many transcendental qualities. Today I pray to Srila Vamana Maharaja that he will mercifully allow me to always remain as his shadow, thereby enabling me to always follow him. I consider him to be my siksa-guru, because since the day I joined the mission he has given me whatever I required with great affection.