The Importance Of Book Distribution 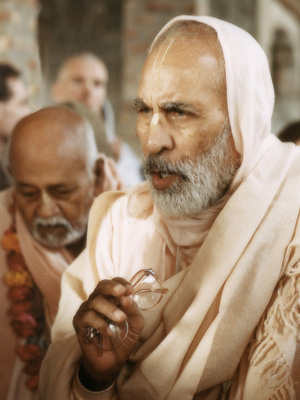 By the order and by the mercy of his gurudeva, Srila Bhaktivedanta Swami Maharaja went everywhere in this world. He went to western and eastern countries, and he preached the mission of our guru-parampara in the line of Srila Rupa Gosvami, Srila Bhaktivinoda Thakura, and Srila Bhaktisiddhanta Sarasvati Thakura Prabhupada. It is very wonderful how, in a couple of years, he preached all over the world – in forests, on islands in the midst of oceans, on the tops of hills, and everywhere else. How was it possible?

It was possible because he translated so many authorized books, like Sri Caitanya-caritamrta, Srimad Bhagavatam and Sri Bhagavad-gita as it is, and he ordered his disciples to distribute them in public places – includingeven churches, airports, supermarkets, and railway stations. At that time, beautiful teenage girls preached everywhere, with no shyness, dancing here and there – and they distributed his books. They went everywhere chanting: "Sri Krsna Caitanya Prabhu Nityananda Sri Advaita Gadhadara Srivasadi Gaura Bhakta Vrnda," and "Hare Krsna Hare Krsna Krsna Krsna Hare Hare Hare Rama Hare Rama Rama Rama Hare Hare."

By this kirtana, and by writing and distributing books, almost the entire world knew about him; and this mission was preached everywhere in a couple of years. I also want this. Srila Bhaktivedanta Swami Maharaja is my siksa-guru. Also, my diksa gurudeva, Srila Bhaktiprajnana Kesava Gosvami Maharaja, told me to translate books, from their original languages, and I am doing so. Up tonow, about 50 books have been published, and they are both supplementary and complementary to the books of Srila Bhaktivedanta Swami Maharaja.

In my supplement to his Bhagavad-gita As it Is, I have given additional commentaries of Srila Visvanatha Cakravarti Thakura. Now I want to publish Sri Bhakti-rasamrta-sindhu, a supplement to what he gave in brief in the form of Nectar of Devotion, and there I will give the commentaries of Srila Visvanatha Cakravarti Thakura and Srila Jiva Gosvamipada. Besides this, Sri Ujjvala-nilamani is coming to you very soon. Sri Bhajana-rahasya, Sri Brahma Samhita, Sri Brhad Bhagavatmrta, and so many other books are also standing in a row now, calling out, "You should publish me first." "You should publish me first."

Many devotees are helping me in this endeavor. Srila Bhaktivedanta Swami Maharaja has sent me very learned scholars – even scholars in Sanskrit, Bengali, and Hindi – and they are helping me. He has also sent me many expertsin computers. I want to follow him, and I pray that he may inspire me so that I will accomplish all these tasks. For publication and distribution of books, Srila Bhaktivedanta Swami Maharaja has sent his disciple Niscintya prabhu. He is very experienced; he has the authority to publish the original books of Srila Swami Maharaja and he is doing so. Also, my most dear, beloved son, Radha Kanta dasa, is assisting him.

Srila Swami Maharaja inspired me to go to western and eastern countries to preach the same mission that he preached, and I am happy that by the combined mercy of Srila Swami Maharaja and my diksa-guru, Srila Bhaktiprajnana Kesava Gosvami Maharaja, I am doing so. Srila Swami Maharaja preached everywhere by his books. The words we speak in classes may disappear into the sky, but what is written as a document, in books like Sri Caitanya-caritamrta, Srimad-Bhagavatam, and the books of the Gosvamis will remain forever and help for millions of years.

Badger, California: June 1, 2002: I heard that today, at midday, there was a very good nagara-sankirtana. I heard that only one hundred devotees attended, but I was hoping there would be more than five hundred. Nagara-sankirtana and distribution of books is the most important preaching. Sri Caitanya Mahaprabhu preached His mission at the Sankirtana Rasa-sthali in Srivasangam (the house of Srivasa Pandit), and from there He preached everywhere in India. You may bea very high class of sannyasi, or you may have any other high position, but you can never be greater than Caitanya Mahaprabhu, Nityananda Prabhu and Srila Haridasa Thakura. Try to follow their examples. Now I am old and I have heart problems; otherwise I would be in the front line of the sankirtana party. So don't be idle. If you go and preach, then Krsna, Radhika, and Caitanya Mahaprabhu will give you inspiration.

I want to say that the distribution of books is a main part of preaching. Although we do a lot of preaching, it may be that much of it will 'evaporate in the air'. In book publication and distribution, on the other hand, this preaching is solid. We are now publishing many books, and, as you are very inspired to distribute the books of Srila Swami Maharaja, your Srila Prabhupada, I want that you will also distribute my books, which are complementary to his. We have published more than forty books, and we are preparing to publish Sri Ujjvala-nilamani and Sri Bhajana-rahasya. I want to make a plan to distribute these books, and I think that it will be very easy for you all to give some attention to this. You can very easily distribute two books of each title, five books of each, or six books of each, and Niscintya prabhu and Radha Kanta prabhu will explain to you how easily you can do it. If you do this, it will be pleasing to Srila Swami Maharaja, it will be pleasing to me, and it will also be very helpful for the devotees. I don't want to distribute these books for the purpose of making money. I want people to have the books so that they can see how glorious they are, and by that they can advance.

Thus Srila Bhaktivedanta Swami Maharaja preached, and somany came and became happy. Young, very beautiful, energetic persons came. Srila Bhaktivedanta Swami Maharaja made many preaching centers and established book distribution. He also published so many editions of his magazine. His one magazine, (BTG), became very popular all over the world. He translated so many books, and gradually they were also distributed all over the world. At thattime there were very beautiful young ladies. They used to go here and there, to airports, to markets, and everywhere. They knew no shyness. They gave up everything for preaching, and that is why you are now seeing devotees all over the world. After Srila Prabhupada's departure, however, many became very weak and hopeless.

So I want that we go to common people and preach. I am not seeing that same enthusiasm and spirit which was there during your Prabhupada's time. You should have the same spirit – and then you can preach. Nityananda Prabhu went to Jagai and Madai and said, "What are you doing? You should chant Hare Krsna just once." "Oh, Hare Krsna, Hare Krsna" and they followed.

So I want the same spirit. The books should be distributed everywhere, and preaching should also be in that spirit. Don’t think, "I don’t know anything, I am so weak." Krsna will give you intelligence. I was also very weak, like dry straw. But then I became so strong to preach and serve my Gurudeva, nitya-lila pravista om visnupada astottara-sata Sri Srimad Bhakti Prajnana Kesava Gosvami Maharaja. All qualifications are gradually coming and helping me, even though I am now in old age. So you are not weak.

Also, you should try to give out the books which are published by us. In Srila Swamiji Maharaja's time so many young girls used to do this, and all the boys did it. That is why, very quickly, Krsna consciousness spread all over the whole world. So, again I want this. Nowadays these leaders are not doing nagara sankirtana, hari-nama, but I want that all my disciples shoulddo it. Even if there are two, three, or four persons, there is no harm in that. You should go out with a mrdanga and karatalas. If there is no mrdanga, no harm, you can do it with only karatalas. Just chant, "Haribol, Haribol, Hare Krsna, Hare Krsna." And, regarding my books, each devotee should take at least 10 sets and distribute them. I have told this so many times. You can also do this – to serve and please Gurudeva and Krsna – and go on doing it. Thank you.]