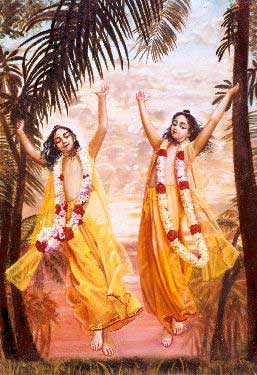 After Caitanya Mahaprabhu took sannyasa, He wanted to go to Vrndavana, but Nityananda Prabhu kindly, by trick, changed His direction and took Him to Santipura, the village of Sri Advaita Acarya. Nityananda Prabhu called all the people of Nadia, especially Mahaprabhu's mother Saci-maiya, to come and meet Him. There, Saci-maiya met with Him when He was in sannyasa dress.

Nityananda Prabhu served in so many ways at the Ratha-yatra Festival, and after the festival Mahaprabhu ordered him to return to Bengal and preach His mission there. He preached without care for caste or creed, and he especially preached to those who were inferior in caste and very poor.

Nityananda Prabhu began to laugh very loudly, and while laughing he told the king's servant, "Certainly your place is not pure enough for me. A cowshed is superior. You should tell the king, "Many Muslim generals and soldiers will come to your house. They will destroy you, your entire family, your cows and everything you possess; and they will

eat meat here. You have no place for me, but you will have to make a place for them." After saying this, he left the village and went to another.

The next day many Muslim soldiers came, killed the king's family, slaughtered cows and cooked them there, and then they set the entire village on fire. Those who were in favor of that king were destroyed, and thus, what Nityananda Prabhu had told was proven true.

There are many pastimes, but I am only touching some.

["The noble Nityananda Prabhu is never angry, for he is the personification of supreme transcendental bliss. Devoid of all false ego, Nitai wanders about the town." (Akrodha Paramanda by Locana dasa Thakura, verse 1)]

The meaning is very important. Akrodha means 'not angry'. We should try to give up anger, which is the root of all kinds of evil. Even if there is a reason to be angry, we should not be angry. Nityananda Prabhu is telling us this, through the medium of this song. He is saying, "You should be like me." When Jagai and Madhai hit him and he was bleeding, he prayed to Mahaprabhu, "In this incarnation, You should forgive them, and give them krsna-prema." Thus, by the request of Nityananda Prabhu, Sri Caitanya Mahaprabhu gave the brothers krsna-prema.

Mahaprabhu and all our Gosvamis have told us that even if there is a cause to be angry, we should not be angry. We should control our anger. If there is need, however, if someone is criticizing one's Gurudeva, or any pure devotee, or Krsna, Mahaprabhu, or Nityananda Prabhu, then we can use our anger. At that time we should be like Hanuman, who burned all of Lanka into ashes.

Sri Vrndavana dasa Thakura has declared: "Ati parihare jei papi nindakara tabe / lati marun tera sirera upare." Do not disobey or dishonor Nityananda Prabhu. If you do so, I will kick you on your head." Only in the highest stage of bhakti are you allowed to be angry. You should control your anger; not be controlled by it. If you are so controlled, you will be destroyed.

["The Supreme Personality of Godhead said: It is lust only, Arjuna, which is born of contact with the material mode of passion and later transformed into wrath, and which is the all-devouring sinful enemy of this world." (Bhagavad-gita 3.37)]

Those who have worldly desires for position and so on, and who have a false ego in this regard, will lose everything. If you cannot control your mind, you may also disobey your Guru, and you may even give up your Guru. That is why Lord Sri Krsna has told us not to be angry. Keep the anger finger out of your bead bag. Do not use this (pointer) finger in chanting, because it denotes anger. It says, "I will punish you! I will shoot you!

Do you not know who I am?! I will break your legs!" Be careful.

["Going from door to door, to the houses of the most fallen and wretched souls, He freely distributes the gift of the harinama maha-mantra." (Akrodha Paramananda verse 2)]

Taking the flood of krsna-prema, Nityananda Prabhu went door to door, to give that love and affection.