Please Do Not Be Late 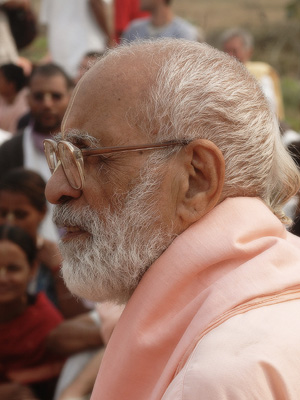 The sounds of the gopis' crying entered the ears of Krsna. He could not tolerate hearing this. Still, although His life and soul - and His everything - was in Vraja, there were some reasons that He did not return there.

When Krsna was ordering Uddhava to go to Vrndavana, He told him, "Please do not be late." Then He called out, "Guards! At once bring the golden chariot that was used by Kamsa!" That golden chariot was immediately brought, and Krsna told Uddhava to sit on the chariot at that very moment and go to Vraja.

Uddhava was unaware that Krsna's intention was to send him to be admitted in the University of the Gopis, where Krsna Himself had learned the art of love and affection. He did not know that Krsna was thinking, "If he will be admitted and learn something there, then, when he returns, he will understands My feelings. Otherwise, in all of Mathura, there is no one who knows My heart. I see that only Uddhava is at least somewhat qualified enough to learn about pure love and affection. When he goes to Vraja he will realize the heart of the gopis; otherwise there is no possibility." It was only for this that Krsna sent him.

Uddhava was thinking, "How can I go there? I cannot tolerate separation from Krsna." Krsna pacified him by telling him, "I am thoroughly there, and only partly here. You will soon see that I am totally there." Uddhava then left Mathura and went to Vraja.

It took so much time for Uddhava to reach his destination; it was evening when he arrived and darkness was descending. He now saw what Krsna personally told him - that He was there totally, and in Mathura partly. By the mercy of Yogamaya, Uddhava saw the characteristics of Vraja when Krsna was there. He saw many cowherd boys returning from cow-herding, and he saw Krsna's millions of cows like Dhavali and Syamali. He saw that all the cows had udders containing more than 60 kilos of milk; and that some bulls were fighting each other for those cows. All the gopis had lit ghee lamps and were doing arcana of their Thakuraji, and they were singing songs of Krsna's pastimes: "Govinda Damodara Madhaveti, Govinda Damodara Madhaveti."

[Srila Narayana Maharaja led the assembled four hundred devotees in very slowly singing this, and he himself began to weep in the midst of the kirtana. Then, for the next few minutes he was speaking in a choke voice:]

"O Krsna, without You all the Vrajavasis are dying. Please come, otherwise we will all die." Uddhava saw and heard this, and then he himself began to weep. Then, in the darkness of the evening, when the cows' lotus foot-dust had filled the entire sky, he entered into the area of Nanda Baba house. Someone showed the way to the house, and then Nanda Baba saw him and stood up - as if his life had come again. He stood up and welcomed this friend of Krsna. He knew that Uddhava was a most dear friend of his son, and so he embraced him. He then went to a brahmana's house and told him that in his own house, in his palace, there were no sweets or similar preparations. He asked the brahmana to bring sweet-rice. The brahmana had no sugar, however, so he brought unsweetened sweet-rice made simply with milk and rice. Uddhava was very hungry, he therefore accepted that sweet-rice like nectar, and then he took some rest.

After taking rest, Uddhava again offered pranama to Nanda Baba and Mother Yasoda. After that he wanted to pacify them, and Nanda Baba wanted to ask for news of Krsna. He wanted to ask, "How is Krsna?" When he remembered Krsna, however, his voice became choked, tears gushed from his eyes, and he was about to faint - so he could not ask. He asked Uddhava instead, "How is my brother, Vasudeva? I know that he was suffering so much at the hands of Kamsa, but then Kamsa's own sinful activities killed him." He did not say that Krsna killed Him, but that his own sinful activities killed him. He asked, "Now Vasudeva is fine?"

Then, weeping, his voice choked, he asked, "How is Krsna?" and his weeping increased. He could not tolerate his feelings of separation, and he said, "O Uddhava, in order to forget Krsna, I go to the bank of the Yamuna River; but when I go there, more remembrance of Him comes to me because His footprints are everywhere. I saw the ghat where He used to take bath and play with the gopas and gopis, and still more memories came. So I returned back. Then I went to Govardhana, but there also - every kunja, every grove, Manasi Ganga, and the exact place where Krsna lifted the entire mountain on his finger - all are weeping for Him. I saw Krsna's footprints everywhere there, and I could not tolerate the suffering of separation due to this. So I went to Bhandirvana and elsewhere, but I could find no consolation anywhere. What should I do?"

Saying this, Nanda Baba fainted and rolled on the earth. Uddhava now realized, "I have so much love and affection for Krsna, and Vasudeva and Devaki do too, but we do not have a single atomic fraction of the love and affection of Nanda Baba and Mother Yasoda. Nanda Baba is at least able to say something, but Mother Yasoda never speaks - because she is always in an unconscious state. She has become blind and her voice has stopped. She can only see by her ears, because her eyes are continually filled with tears."

Uddhava wanted to say something. He was thinking, "What should I tell them?" Should I say, 'Nanda Baba, there is no need to weep, for you are very fortunate.' Or, should I encourage him by saying, "Everyone else weeps for their own children or wife. But if someone weeps for Krsna, his life is successful. As for you, your love and affection for Krsna is unparalleled. You should continue to weep.' No, I cannot say this, because Krsna told me to pacify them. By saying this their suffering will increase further. No, I should not say this. But what should I tell them? Should I say, 'Do not weep'? If I do that, then all the sastras will tell me that I am speaking lies. If a drop of a tear comes for Krsna, one's life is successful. So what should I say? Should I tell them not to weep - or to weep bitterly? I cannot decide.

Uddhava finally told Nanda Baba, "Your son Krsna is not really your son. He is the Supreme Lord. He is in the heart of all living beings, and yet you are thinking, 'He is my son.' He has come as your son, but He is not your son. You should remember this. So why are you weeping? You are never separated from Krsna because He is everywhere - and He is there in your heart. You are so fortunate."

Hearing this, Nanda Baba's weeping stopped. He turned his head and looked towards Uddhava with a long, sharp sidelong glance. He thought, "This foolish, ignorant boy could not realize my suffering. I thought that because he is a friend of Krsna, he may realize something, but he does not understand my separation mood for Krsna at all."

He said, "O Uddhava, your milk teeth have not yet gone; you are like a baby. I had previously thought you were intelligent, but now I know that you are not. You are ignorant. You told me, 'Your son is the Supreme Lord, and He is everywhere; so there is no need to feel separation from Him.' If it is a fact that my son Krsna is God, then I was really fortunate. But I think that I am most unfortunate. Why? Because this 'God' came to my house like a son, and I could not give Him love and affection; and that is why He left me and went elsewhere - to get more love and affection. I know that I am not a father. My heart is like a thunderbolt, for even though I am feeling all these sentiments, I am not dying. Why not?" Nanda Baba continued, "There was only one father in this world, and his name was Maharaja Dasaratha. When his son Rama went to the forest, Maharaja Dasaratha lamented. He could not tolerate his son's separation, so he called out his last words, 'Ha Rama, Ha Rama, Ha'; Before he could say 'Rama', he left his life and died. Why am I not dying?" Nanda Baba began to weep bitterly.

Uddhava offered pranama to Nanda Baba and said, "You are like Mount Everest - so high - and I am standing on the root of that mountain and looking up at it with my head bent backwards. I cannot compare with even an atom of your love and affection, and therefore I do not see any way to pacify you." In this way, the whole night passed, and then it became morning.

Uddhava left Nanda Baba's home and entered a very dense forest of millions of kadamba trees, and at once he saw that there were many lights. These lights were the gopis who were lamenting and weeping there, and who had never returned to their families. They were the maidservants and sakhis of Srimati Radhika, and their sakhi Radhika was still more luminous.

Those gopis saw that someone was coming, and they wondered, "Whose chariot is here?"

I have been explaining the aim and object of all living beings, which is gopi-prema. You should know the aim and object of our practices and devotion; but do not jump, otherwise you will become mad. Do not try to artificially enter raganuga-bhakti. As explained by Srila Rupa Gosvami, when you mature in vaidhi-bhakti, a greed will automatically come to serve Radha and Krsna. At that time you will be somewhat qualified, and after that you will become a high class of a pure devotee. This is my instruction: Begin from vaidhi-bhakti - develop from sraddha to nistha in high association. Do not jump to raganuga-bhakti and asta-kaliya-lila; otherwise you will become mad. Try to follow my instructions and practice bhakti-yoga from the lower stages.