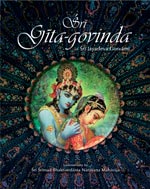 [Srila Jayadeva Gosvami, an intimate associate of Sri Caitanya Mahaprabhu and author of the famous book Gita-Govinda. We are enthusiastic to share with you a few of Srila Bhaktivedanta Narayana Gosvami Maharaja ever-fresh glorifications of this great Gaudiya saint.]

Sri Jayadeva Gosvami was a very high class of maha-bhagavata, and he wrote a book called "Gita Govinda", "The Glories of Govinda". When Sri Caitanya Mahaprabhu saw this book, He made a copy and instructed His followers to also obtain one. At that time there was no press, the books were reproduced by hand, so Mahaprabhu ordered His followers to write it down and then preach. In Jagannatha Puri, all the Vaisnavas and associates of Sri Caitanya Mahaprabhu wrote down that book and made a necklace for themselves of the beautiful songs therein.

The first song in this book is Srita Kamala. The words and meaning of the song are very near and dear to Krsna, so much so that when Krsna as Jagannatha-deva heard it, He became attracted. A devi dasi was singing it in the forest at night; and, hearing this sweet kirtana, Jagannath-deva opened His door. It may seem that He is a statue of wood, but He is not. He left the temple and began to run very quickly through the forest, towards that singing, and the many thorny bushes in that forest scratched His body and tore His clothing. Before He reached that devi dasi she stopped her kirtana, but He had already become maddened.

Jagannatha somehow returned to His temple and closed the door. In the morning, when the pujari came for mangala arati, he found Jagannatha covered with scratches and His cloth torn. The pujari called the main priest and the king, who both became very anxious wondering, "Who could have done this?" They wanted to arrest the culprit, but of course, Jagannath Himself was the "culprit".

Why did Jagannatha run away after a lady? It was because of His intense attraction for that song. Jagannatha deva appeared to the king in a dream and explained that He had heard His maidservant singing from very far away and was so attracted that He had to run to her. He told the king that it was the bushes and thorns of the forest that had scratched His body.

After this incident, it was mandated as a precaution that this song be sung only in the presence of Jagannatha deva. Everyone was ordered to be very careful not to sing this song in a distant place.

Once at night, when Sri Caitanya Mahaprabhu was going to Cataka Parvata, a mountainous land located in Jagannatha Puri on the coast of the Indian Ocean, a lady was sweetly singing Srita Kamala in a very beautiful tune. Mahaprabhu could not restrain Himself. He was oblivious to who was singing and began to run in the direction from which the song was coming. His servant Govinda knew that this song was coming from a lady, a very young lady. He chased after Mahaprabhu, calling, "Don't go! Don't go! Otherwise You will give up Your life for having embraced a lady!" He was running after Mahaprabhu, but he could not run like Sri Caitanya Mahaprabhu, who was moving very swiftly. Then he loudly shouted, "O Prabhu, what are You doing? This song is coming from a very beautiful young lady! Don't go and embrace her!" Hearing this, Mahaprabhu became alert and came to His external senses. He then said, "Oh Govinda, if you had not stopped Me and I had touched that lady, I would have jumped into the ocean and given up My life." This song is so full of rasa.

That book Gita-Govinda is so famous, and it is now translated into Hindi with good explanations. It will soon be ready for distribution all over India and to Hindi speaking people around the world. The English edition will also be available very soon, and so many other books will also be available. I'm working very hard, and my associates are helping. Krsna and my Parama-pujyapada Srila Bhaktivedanta Swami Maharaja have sent so many learned and qualified bhaktas to me. I'm very lucky. He has arranged everything and they are helping me. Very soon Sri Ujjvala Nilamani will also be published, and it is a very good book. Sri Bhakti-rasamrta-sindhu of Srila Rupa Gosvami and the Sri Brhad-Bhagavatamrta of Srila Sanatana, the guru of even Srila Rupa Gosvami, will also be printed very soon. Studying these books will greatly help you in your understanding of bhakti.

[“O dear one, Sri Krsna’s loving smile during His rasa pastimes still awakens within My mind. Aha! As His sweet lips blew into His enchanting flute, His eyes were restless and full of longing; thus His crown tilted as His earrings played over His cheeks.”]

[“Krsna’s hair, decorated by peacock feathers in the curvature of a half moon, looked like a glistening cloud sheltering many rainbows.”]

This song is very exalted. Sometimes Srimati Radhika – with or without reason, or with a shadow of a reason, or having created a reason in Her mind – becomes manavati. Manavati means sulky (with transcendental loving jealous anger). Once, when Krsna approached Her while She was in that mood, She told Him, “O Black One, You should go away from here.” And She turned Her face away from Him. He continually begged Her to forgive Him, but that day Her mana was very strong and at last He left that place.

After Krsna left, Lalita-devi saw that Srimati Radhika was greatly lamenting and weeping for Him, and singing, “Why did I do what I did? Now I am remembering how He came to Me, how sweet He was, and how He placed His flute at My lotus feet. Oh, why did I do mana? Fie on Me! Why did I do so?” She was continually repenting, thinking, “How very lovingly He talks. He can take anyone’s heart so easily.”

Lalita said, “Why can’t You forget Him?”

Srimati Radhika replied, “How can I forget Him? This is the thing – I want to forget Him, but I cannot.”

Lalita said, “Then what can I do? I cannot help You! I told You to give up that Black One; but You do not obey me, so what can I do?!”

Always remember that any karma, jnana, yoga, tapasya, and worldly matters should not cover your bhakti. Don’t give importance to anything other than bhakti. Always remember that pure bhakti is our aim and object. This was also the aim of Srila Rupa Gosvami, of all Sri Rupanuga Vaisnavas, and of Parama-pujyapada Srila Bhaktivedanta Svami Maharaja and myself. I have come only to sprinkle these sacred truths. 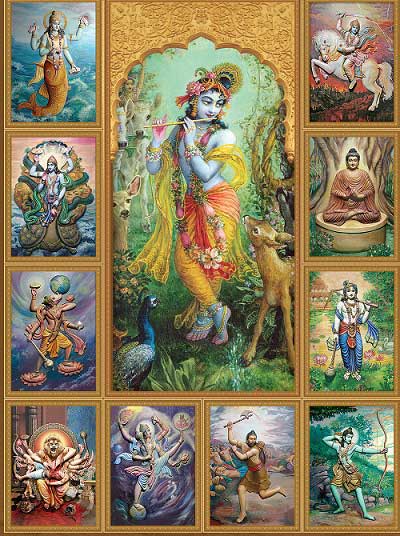 Why is Jayadeva Gosvami, who is so rasika, beginning his Sri Gita-govinda with a description of the ten prominent avataras? If a person eats only rasamalaya for breakfast, lunch and dinner, he will never appreciate it. If he takes something bitter, savory, sour, and so many other preparations, then, when he tastes rasamalaya he thinks, “This is the king of all preparations!” Similarly, Jayadeva Gosvami has glorified the astonishing pastimes of all the avataras to enhance our appreciation of Krsna. Kesava dhrta-dasa-vidha-rupa. Krsna Himself has appeared in these ten forms. If there are twenty mighty wrestlers assembled together in one place and they all fight each other, when all have been defeated and only one is left standing, then we will think that he is so powerful and expert. Otherwise, if we were to meet that same wrestler in a situation where there were no opponents, we would not be able to appreciate his marvelous prowess.

In this song, Jayadeva Gosvami presents the gradual evolution of the theistic conception for the sake of attracting all jivas who are in different stages of their own spiritual evolution. Not everyone will be attracted to rasa-lila, but their first attraction may be to Matsya, Kurma or Nrsimha. Even Sri Caitanya Mahaprabhu performed pastimes in many forms to attract and give mercy to all.