You May Die Tomorrow 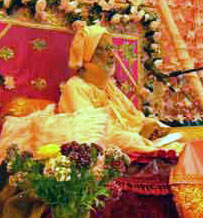 There once was a dispute between a father and a son. The father's name was Hiranyakasipu and his son was Prahlada. Hiranyakasipu told Prahlada, "You should not utter the name of Visnu - not even in your dreams!" Prahlada replied, "Please chant the Lord's holy name." In this way they were always at odds. Once, Hiranyakasipu heard something from Prahlada that made him want to kill him - but he could not. Prahlada Maharaja was sent back to school, and the teachers were out somewhere for awhile. All the boys wanted to play while the teachers were out, but Prahlada Maharaja said to them, "Listen. From the beginning of your life - if you want to be happy throughout this life and the next - then meditate, chant, and perform devotional service to Krsna." The students replied, "We are now children. We should study and fulfill our worldly desires. We should engage in sense gratification, playing many good games. Later, when we are old, we will chant and practice devotion. Why now?"

Prahlada Maharaja said, "There is no certainty you will be alive tomorrow, or even until the end of today. You may die at any moment; so now in the beginning of your life, you should chant and remember the Supreme Personality of Godhead."

Doubtful, the boys inquired, "But if we do not earn money, how will we maintain ourselves?" Prahlada Maharaja replied, "You don't like suffering, but still it comes. You don't want old age or death, but still they come. Similarly, if happiness and money is destined to come to you, they will come. They come by your past activities in previous lives. Do not waste your time for these things. Surely they will come. Have strong belief in this. We don't want any calamity to befall us, but still it comes. In a similar way, money, reputation, position, and name and fame will come by your past activities. Don't be worried for this - or for your maintenance."

Prahlada Maharaja continued, "This life-span is about a hundred years, and half of those years - about fifty years - is lost in sleeping. The beginning twenty years are lost in playing and becoming expert in any field to make money. Between the ages of eighty and a hundred years, you cannot even stand up. There is always some pain here and there, and you cannot concentrate on doing bhajana. Twenty and twenty are forty, and ten years remain to make fifty. In those ten years you will have to marry and make money to maintain your children and all subordinates.

So when will you do bhajana? When will you have time to chant and remember the Supreme Lord? If you have a small baby and he is sometimes saying baba baba', daddy daddy', papa papa', or mommy mommy', how will you be able to concentrate on bhajana and be renounced from worldly thoughts? If your wife is very beautiful and she is weeping, will you be able to give up thoughts about her? If your father and mother are old and counting on your support, can you give them up?" In this way, Prahlada Maharaja was training his fellow students: "From the beginning of your life, you should do bhajana."

The boys asked him, "How do we do bhajana?" Prahlada Maharaja answered, "Take shelter of any bona fide Guru, and under his guidance follow these principles:

["Hearing and chanting about the transcendental holy name, form, qualities, paraphernalia and pastimes of Lord Visnu, remembering them, serving the lotus feet of the Lord, offering the Lord respectful worship with sixteen types of paraphernalia, offering prayers to the Lord, becoming His servant, considering the Lord one's best friend, and surrendering everything unto Him (in other words, serving Him with the body, mind and words)" (SB 5.7.23-24)]

The same practices, performed with a special mood of greed to attain the devotion of the residents of Vrndavana, are called raganuga-bhakti. The following life history is an example of this:

There was a very well cultured brahmana boy named Bilvamangala, and he was from an aristocratic family. Once he went to a market in a big city, and there he fell into the trap of a very beautiful teenage prostitute named Cintamani. Cintamani used to sing a sweet and first class krsna-kirtanas. This boy, Bilvamangala, became very much attached to her. One day his father died, and all the relatives were present to perform the last rites. Many preparations were made, but Bilvamangala left in the midst of that ceremony and went out into the cold and rainy night.

There was a river between Cintamani's house and Bilvamangala's house, and now it was quite flooded. Bilvamangala was on the shore of the bank of that river thinking, "Oh, how will I cross? Somehow I must cross!" He then saw something floating in the river so he caught hold of it and crossed. When he arrived at Cintamani's house the door was closed. He shouted, but there was no response. He went around the house thinking, "Where can I jump inside? There is no way, because the boundary wall is very high." He saw that a rope-like thing was falling from the roof, grabbed onto it, and climbed up. It was so cold and rainy, however, that he fell down from the top of the wall, and a loud sound came from his fall. Inside, the prostitute told her maidservant, "Go and see where that sound is coming from."

The maidservant went outside and called, "Oh, Bilvamangala is here!" Cintamani said, "Bilvamangala? How did he come here?" They brought him inside the house, made him warm and he thus came to his external consciousness. They asked him, "How did you come here? The walls are very high." He answered, "I saw a rope coming from your roof and I climbed it." They said, "We want to see it." They went outside again and saw instead a very poisonous black snake. At that time Bilvamangala had no knowledge of whether that thing was a rope or a snake - and this is a symptom of sensual attachment. After that they asked him, "Oh, how did you cross the flooded river?" Bilvamangala said, "I rode on a log." They went to the river and saw that that "log" was actually a dead person - with a very bad smell and full of worms. He had had no knowledge that it was a dead and rotten body.

Bilvamangala was so attached to this prostitute that he had forgotten everything else. Now that prostitute brought him to his senses by saying, "My body is full of stool, urine, blood and similar contaminated substances; and yet you are doing so much for it. If you chant the holy names of Krsna, your life will be successful." Her words entered the heart of Bilvamangala as an arrow and penetrated it - and he left at once.

While he was walking, he became very thirsty. He saw a well and many ladies there pulling water from it. He saw a very beautiful teenage girl and asked her, "Oh, can you give me water?" He continually stared at this girl and became attached again. He took water from her, and he gave his heart in exchange. He followed her to her home. Her husband was sitting outside and she went inside her room.

The husband said, "Oh Mahatmaji?" He thought that Bilvamangala was a mahatma, a saint. He asked, "Who are you? From where are you coming? What do you want, and why have you come here?" Bilvamangala said, "I want to see your wife." Thinking Bilvamangala a very gentle saint, that man called his wife and said, "This mahatma wants to speak to you. Perhaps he is hungry and wants something to eat." She came out of her house and said, "This is the boy who was very thirsty and took water from me at the well. What do you want? Can I give you anything to eat, or anything else?" He replied, "No, I want your two hair pins." She asked him, "Do you have thorns in your feet, or anywhere?" He said, "Yes, something is there on a very soft area, so I will take it out." That was true; do you understand why that was true? He had some attachment and it had gone into his heart, a very soft area. She gave him her hairpins.

Thinking, "These eyes are cheating me," Bilvamangala at once pierced his eyes with the hairpins. Blood flowed from those eyes and he called out, "Krsna! Krsna! Where is Krsna?"

Attachments create obstacles and problems in our attempts to perform bhajana. We want to do bhajana but we are so much entangled in silly, worldly things - and therefore we cannot progress. For this reason Bilvamangala had considered, "If there will be no eyes, there will be no attachments."

Now with a very strong desire to serve Krsna, he proceeded to Vrndavana. A blackish boy soon came to him and said, "O Baba, where are you going?" Bilvamangala replied, "I am going to Vrndavana." The boy said, "Oh, I'm also going to Vrndavana." Bilvamangala asked him, "Now I am blind; can you help me?" The boy said, "Oh yes, why not? You can catch hold of My stick and I will take you" - and he took him. Now, on the way Bilvamangala continuously repented, and sang about the sweet pastimes of Krsna and wept bitterly. That boy, Sri Krsna Himself, was noting the words of his songs in His own heart, and this was like great nectar for Him. His songs later manifested as the book called Sri Krsna-Karnamrta, meaning "nectar for the ears of Sri Krsna."

Sri Caitanya Mahaprabhu found this book in handwritten text while He was traveling to various holy places in South India, had it copied, took it with Him on His return trip, and, considering it a most valuable jewel, presented it to His devotees in Puri. With great pleasure, He used to regularly hear excerpts sung from it.

The bhakti of Sri Bilvamangala Thakura is called raganuga-bhakti. He had heard so many words and songs from Cintamani, and he had some attachment for her. Now he collected all the attachment from his heart and gave it to the lotus feet of Krsna. His raganuga-bhakti is in the mood of a sakhi, a gopi who has a leaning towards Lord Krsna. She glorifies and wants to serve Krsna more than she does Lalita, Visakha or Srimati Radhika, and therefore she is called "sakhi".

Bilvamangala Thakura's desire was that Krsna should be served by all the gopis. Srila Prabodhananda Sarasvati is also a raganuga-bhakta, but he wanted that Krsna should serve Srimati Radhika and weep bitterly for Her. This kind of gopi thinks, "Why should Radhika lament for Krsna? He should lament for Her." This is another kind of raganuga.

Now you should decide who you want to follow and what you desire as your goal of life. I know that you cannot decide; but anyway for now you must follow vaidhi-bhakti. The beginning of bhakti is sraddha* [See endnote], so tomorrow we will begin our discussion from there. We will explain the meaning of sraddha and how sraddha becomes nistha (steadiness in devotion). You should try to take these instructions and put them in your pockets. Do not go home empty-handed, or with empty pockets. The devotees here in Holland have called you, and they are managing everything for you. So many thanks to those who are organizing. You are without worries; you are free; you do not have to cook and you have no responsibilities here. Your hosts are cooking for you. You have all facilities here, so try to take something and your life will be successful.

"Sraddha is confident, firm faith that by rendering transcendental loving service to Krsna one automatically performs all subsidiary activities. Such faith is favorable to the discharge of devotional service." (Caitanya-caritamrta Madhya-lila 22.62)]