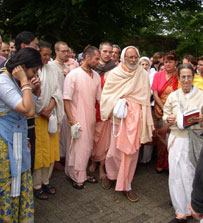 Srila Rupa Gosvami saw that Srila Raghunatha dasa Gosvami is grievously weeping and feeling separation for Srimati Radharani, day and night. He therefore gave him his book Sri Lalita-madhava to read. Reading that book, Srila Raghunatha dasa Gosvami became like a mad person, weeping even more continuously, so much so that the book became wet and began to be ruined. Srila Rupa Gosvami therefore told him, "Give me back the book, because I will have to make corrections;" but Srila Raghunatha dasa Gosvami replied, "Oh, I will not give it back." Then Rupa Gosvami wrote Dana-keli-kaumudi - for him only - describing how Sri Krsna checked all the gopis at Dan Ghati and how Srimati Radharani and Sri Krsna quarrelled with each other when He demanded toll tax* [See endnote 1]. The gopis asked Krsna questions like, "Did You receive this forest from Your father, or, from where have You gotten it?" An abundance of sweet and loving quarrelling took place there.

[Demanding a road tax, Krsna quarrelled for several hours at Dan Ghati with the daughter of Vrsabhanu Maharaja. Rasika-bhaktas visiting Govardhana are eager to listen to that sweet prema quarrel. May that Govardhana fulfil my desire that I also can hear that verbal battle. (Sri Govardhanastakam, verse 3)]

"O Giriraja, You have seen how They were quarrelling. When Lord Krsna demanded a toll tax, the gopis told Him, "This is Sri Vrndavanesvari's forest, not Your forefathers'. Srimati Vrnda-devi donated this entire land to Srimati Radhika." Lord Krsna said, "Vrnda is My wife and her property is Mine!" The gopis then called Vrnda-devi and asked her, "Are you married to Krsna?" She replied, "I don't know this black cheater. He thinks that all gopis are His wives."

Srila Visvanatha Cakravarti Thakura has written this song, and he is praying therein, "I want to hear this sweet loving quarrel. I want to be in Vrndavana. I pray to the dust of Sri Giriraja Govardhana and beg that he be merciful.

When Srila Rupa Gosvami gave this second book to Srila Raghunatha dasa Gosvami, he read it and began to laugh - sometimes rolling on the ground while laughing. Then, very cleverly, Rupa Gosvami told him, "Please give me back Lalita-madhava for some days; I will make corrections and return it to you."

In this way Srila Raghunatha dasa Gosvami was always absorbed in the transcendental madness of feeling separation and meeting. After some time he wrote Sri Vilapa-kusumanjali, and he began this book by offering pranama to his Guru. Although, Sri Svarupa Damodara is also his Guru, his real Guru, the Guru whom he was actually following in totality, is Sri Rupa Gosvami. In the first verse he offered pranama (obeisances) to his Guru, Sri Rupa Gosvami, in his form as Sri Rupa Manjari. He was joking with her (Sri Rupa Manjari) and telling her, "O, you are very famous all over Vraja as a very chaste lady. But although your husband is not at home, although he has gone to buy a cow and has been out of Vraja for many days, I see that there is a cut on your lips. How did it happen? It seems as though a parrot has come and, thinking your lips to be a bimba fruit, has perhaps bitten them." After this pranama, he wrote the rest of the verses of Sri Vilapa-kusumanjali [a bouquet of flower-like lamentations offered at the lotus feet of Srimati Radhika.] In this book he also offered pranama to his siksa-guru Srila Sanatana Gosvami:

Continually weeping, he wrote, "I offer pranama to Srila Sanatana Gosvami, who was very kind to me. I never wanted to drink the nectar of Bhagavan Sri Krsna's pastimes; so he gave it to me forcibly, and thus he was so merciful. I never wanted mercy, but he forcibly gave it to me, and therefore I offer my obeisances to him."

[I am Yours! I am Yours! I cannot live without You! O Devi Radhe, please understand this and bring me to Your lotus feet.]

"O Srimati Radhika I don't want to be a sakhi like Srimati Lalita-devi or Srimati Visakha-devi - of equal rank to You. Only grant me this boon, O Radhike, my Svaminiji! I want to serve You under the guidance of Sri Rupa Manjari, your most obedient and dear maidservant.

This is rupanuga-dhara, the line of conception of service under the guidance of Sri Rupa Gosvami. Srila Raghunatha dasa Gosvami is praying here, "O Rupa Manjari! Only you can save me - by giving me your remnant service." Srimati Radhika was once lying down on Lord Krsna's lap, and He was caressing Her head and serving Her. Her feet were one the lap of Rupa Manjari, who was very gently massaging them. Rupa Manjari called Rati Manjari (Srila Raghunatha dasa Gosvami in his perfected spiritual body as Srimati Radhika's maidservant) and said, "Come on, come on! I will give you remnants. You can massage and I will fan." How merciful is Sri Rupa Manjari to have given this remnant.

I am explaining this topic because this is our aim and object, and you can achieve this goal by following Srila Raghunatha dasa Gosvami. If you are not like him, how you can attain this goal?

He has elsewhere written in Sri Vilapa-kusumanjali:

[For me, the present moment is somehow flooded by a nectar ocean of many hopes. If You do not give Your mercy, then of what use to me are this life, the land of Vraja, and Sri Krsna, the enemy of Baka? (Vilapa-kusumanjali, verse 102)]

"O Srimati Radhika, I have spent so much time only to fulfil this one greed. When will You bestow upon me Your mercy. I have spent years - my whole life - only for this. I only want Your service. If You will not sprinkle Your mercy upon me, then what is the need of my being at Sri Radha-kunda or Sri Govardhana? What is the need of my serving Lord Krsna? I will not even want Him."

[O Lord, O nectar moon of Gokula, O Lord whose cheerful face is a lotus flower, O sweetly smiling one, O Lord melting with compassion, so I may serve You both with love, please lead me to the place where Your beloved enjoys confidential pastimes with You." (Vilapa-kusumanjali, text 100)]"O Lord Krsna, I offer this prayer to you. You are serving and sporting with Srimati Radhika. Wherever You are doing so, please take me there at once. If you are both in Dvaraka I will fly there, but if Srimati Radhika is in Vraja and You are in Dvaraka, I won't go there. I will go wherever She is present. Please take me to that place where You are with Her. I know that you cannot give Her up for even a second, because You and She are one."

[Now that I no longer have the sustainer of my life, the land of Vraja has become empty and desolate, Govardhana Hill has become like a great python, and Radha Kunda has become like the gaping mouth of a ferocious tiger. [Stava-vali vol 4., Sri Prarthanasraya-caturdasaka, text 11)]"Vrndavana, Nandagrama, Varsana and all the holy places of Vraja are now like ghost towns. Now they are like a barren land, a desert; Giriraja Govardhana, where Sri Krsna's pastimes were performed in His kunjas, looks like a python; and this kunda, Radha-Kunda, appears like a tiger ready to swallow me."

Now come down. Come to the process I have previously given you. We must begin our practice of bhakti from the beginning. I have told you about the aim and object of our sadhana-bhajana and life. It is very high, and if you want to achieve it, be like Srila Raghunatha dasa Gosvami, follow him.

[A sober person who can tolerate the urge to speak, the mind's demands, the actions of anger and the urges of the tongue, belly and genitals is qualified to make disciples all over the world. (Sri Upadesamrta, verse 1)]