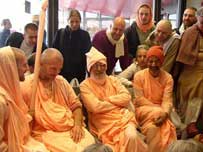 [Srila Narayana Maharaja recently spent almost a week in Berlin, Germany, where the local devotees arranged a beautiful Ratha-yatra festival and where thousands of onlookers were graced by the darsana of Lord Jagannatha and also of Srila Maharaja. Each evening Srila Maharaja lectured on the deep meanings behind the festival, and shared with his audience the four confidential histories of the origin of Lord Jagannatha's appearance and festival. He also explained the significance of Sri Caitanya Mahaprabhu's cleaning the Gundica Mandira along with His hundreds of thousands of followers. He explained how Sri Caitanya Mahaprabhu was teaching us that in order for Krsna to appear on the chariots of our hearts, we must make our hearts free from all anarthas and like Vrndavana. Srila Maharaja recommended that all the devotees read his new book, The Origin of Ratha-yatra, which is a compilation of his previous five years' lectures on the subject, which he gave when he was in different cities of his world tour at the same time that the Ratha-yatra festival was taking place in Jagannatha Puri. Then he added that if one actually wants to get realization of the depth of that festival, then he must hear about it personally from the lips of any self-realized soul who is following Sri Caitanya Mahaprabhu.

Regarding the darsana below, usually you receive formal lectures and darsanas. This one, attended by about 50 devotees who went to the airport to see Srila Narayana Maharaja off at the Tegel/Berlin International Airport, is quite informal. The following is excerpts from the darsana, the last one of Srila Maharaja's 2003 summer world tour, given when he was waiting for his plane to leave on route to India. In this darsana, as his love and affection flowed onto those sitting around him, Srila Maharaja was asking them about their welfare, asking them about their plans, asking them when they would be joining him in India, and answering their questions:]

[Syamarani dasi - showing a drawing of Krsna and Srimati Radhika walking together in the forest:] I showed this to you when I first started, but you didn't like it then. Do you have any suggestions? Are their expressions okay?

[Srila Narayana Maharaja:] What is this?

[Syamarani dasi:] It's going to be a bird.

[Srila Narayana Maharaja:] The upper part of the picture is final, but not the birds.

[Syamarani dasi:] What is Krsna thinking there?

[Srila Narayana Maharaja:] You should tell. He is thinking so many things.

[Syamarani dasi:] Is She in maan (transcendental loving jealous anger), and that's why She doesn't want to walk with Him?

[Srila Narayana Maharaja:] When I see the sloka, then I will tell you. Here They are both thinking Themselves fortunate, and both are going here and there in the beautiful forest of Vrndavana on both sides of the Yamuna.

[Syamarani dasi:] You told me previously that She doesn't want to walk with Krsna and He is trying to pull Her back towards Him.

[Srila Narayana Maharaja:] Sometimes this is so. She is internally very happy to walk with Him, and sometimes She poses as though She is not, thinking, "He should be more eager. He should pray to Me for My company." The pictures should be completed very soon. When we return to India we will print the book.

[To a devotee:] Are you studying, or do you have a job?

[Srila Narayana Maharaja:] Try to have a job.

[Devotee:] I need your blessing so I can get a job in the embassy of Spain and then I can help the devotees better.

[Srila Narayana Maharaja:] You should pray to Giriraja Govardhana and He will fulfil all your desires. All should realize my mercy -- what I have given in my lectures on Ratha-yatra here in Berlin.

[Paurnamasi dasi:] She wants your blessings. [Srila Narayana Maharaja:] Even without her asking I have given my blessings.

[Srila Narayana Maharaja speaking to another devotee:] You? What is your schedule. Yes, you - from Finland. Will you return to Finland and then come to Vraja Mandala Parikrama?

[Srila Narayana Maharaja asking another devotee:) Do you want to come to India?

[Srila Narayana Maharaja:] Yes, because Krsna is tricky there. He may overpower you. He will smile and take your heart.

[Srila Maharaja now speaks to the whole assembly:] Very good. You should all come to Vraja Mandala Parikrama and we will give classes there for one month - as we did in Berlin. You will see Giriraja Govardhana Himself, Yamuna herself, and kadamba trees.

[Tarun Krsna dasa:] When you were in Bombay, I was there with you on a japa walk and I had the opportunity to stand near you. I was looking at you in a very material way at that time, and after that I was feeling very bad about it. I was thinking I have many obstacles in my spiritual life. I want to beg for forgiveness.

[Srila Narayana Maharaja, putting his hand up as if blessing:] Yes, I have forgiven you.

[Sripad Aranya Maharaja:] Gurudeva, last night in your lecture you told about Samyogini, Viyogini, and Vrsabhanu-nandini, [the three features of Srimati Radhika] After that you made a comparison with Sri Caitanya Mahaprabhu, and you said that in Navadvipa He is in the mood of Vrsabhanu-nandini [Radhika when She is enjoying Her morning-to-morning pastimes with Krsna in Vrndavana]. Then you said that in Puri He is like Viyogini [Radhika at Uddhava-kyari in Vrndavana, feeling separation for Krsna who is in Mathura], and when He goes to Sundaracala [the Gundica Mandira] in Puri He is like Samyogini Radhika meeting Krsna at Kuruksetra]. You also said that He is like Samyogini at Godavari. In what sense is there a similarity between Samyogini in Godavari [when Sri Caitanya Mahaprabhu is meeting with Sri Raya Ramananda] and Samyogini in Sundaracala? Regarding His journey to Sundaracala at the time of Ratha-yatra it is very obvious, but not so with Godavari.

[Suniti dasi:] Are you going to Nigeria, Africa?

[Srila Narayana Maharaja:] If they invite me and it is favorable, then I want to go to Africa at least once. I have gone practically everywhere, but not to any country of Africa.

[Premavati dasi:] This year we had our public Ratha-yatra Festival when you were in Birmingham, but Mahaprabhu was not present to give His darsan. How was He being merciful to the people of Berlin when He didn't go on the Ratha-yatra? His cart was prepared and it began to move, but then it stopped suddenly and a devotee accidentally fell into it. So His deity couldn't go to the festival. I was wondering why He didn't go that day. How is this His mercy?

[Srila Narayana Maharaja:] Sometimes, in Jagannatha Puri, Jagannatha does not reach His chariot for two, three, or four days. And sometimes He stops midway. Why does He do so? Because He is independent. What mood is in Krsna and when it is in Him, only He knows. Even Baladeva may not know. Only Srimati Radhika can know; we cannot know. It is very mysterious. Once, our Srila Bhaktivedanta Vamana Maharaja was going somewhere with his party. He wanted to get onto a bus, but someone pushed him and he could not get on. All his devotees were lamenting and thinking, "We missed our program", but after some time they heard that the bus had been smashed and so many died. So Krsna does what He wants, and we cannot understand why. Only Srimati Radhika can tell us. There must be something okay about whatever He does. Whatever He does is good. I never wanted to come to this country but I have been forcibly dragged here and there and everywhere. I don't know why.

[Srila Narayana Maharaja (in a tone that sounded somewhat annoyed):] She is sleeping.

[Srila Narayana Maharaja (in the same tone):] Krsna is waking Her up and saying, "Time is over; We should go to Our homes." There is no need of these questions. Try to remove your anarthas. This is important at your present stage; not asking what Radha and Krsna are doing now. Even if I will tell you, you will not be able to understand or realize what I say. Only an eternal associate can tell all these things. In Dvaraka Uddhava can tell, and in Vraja sometimes Mother Yasoda can tell and sometimes the gopis can tell.

[Addressing all the devotees] You can remember those times when Srila Bhaktivedanta Swami Maharaja used to travel Compare his with my travelling and remember him; and then you can have some idea of how he was travelling and what he was doing.

[Suniti dasi:] Now we can understand that he never left us.

[Sripad Bhaktisar Maharaja and Sripad Aranya Maharaja:] This is Ananga Manjari and her husband Sadananda prabhu. They hosted us at their house. They are very prominent among the devotees here in Berlin. They have done so much preaching in ISKCON here for many years.

[Srila Narayana Maharaja:] Thank you. You should be very strong. You should realize hari-katha. What we gave in Berlin is the life of hari-katha. [Addressing all the devotees] When Srila Prabhupada went to his Goloka-dhama, many devotees became weak and left the mission. They left chanting and remembering Krsna, and I don't want you to follow them. As long as you are alive, you should all be very bold. If you are, Krsna will be very happy and sprinkle His mercy in such a way that you will have taste in chanting His name, in hearing hari-katha, and in performing the other limbs of bhakti. At that time you will have no fear.

[Devotee, giving Srila Narayana Maharaja a long stemmed yellow flower with many leaves:] I would like to give you one flower.

[Srila Narayana Maharaja:] I've heard she is very bold and she is preaching in her country.

These leaves are Syama (dark), and they are like Krsna. And the yellow flower is like Srimati Radhika. If there is no yellow with Syama, then there is no beauty. [Vicitra dasi:] I am reading in your Brahma-samhita your description of the kunjas in Vrndavana. That description is very beautiful.

[Srila Narayana Maharaja:] One day the entire world will be amazed at what I have given. Not now, but later they will realize what I am giving.

[Vicitra dasi:] Has anyone else described the kunjas as you have?

[Srila Narayana Maharaja:] Srila Rupa Gosvami and all of our acaryas have done so. I am only following in their footsteps.

[It is now time to go to the gate, and Srila Maharaja stands to leave the lobby:] Goodbye to Berlin and goodbye to all the devotees of Berlin.