The Vrajavasis Are The Most Fortunate 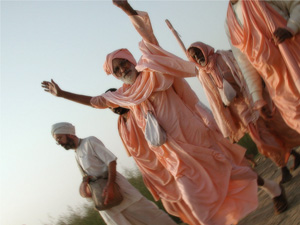 Srila Sanatana Gosvami's Srimad Brhad-bhagavatamrta describes how Sri Narada Rsi traveled here and there, desiring to announce to the entire world the devotee who has the highest mood of devotion and who is the greatest recipient of Krsna's mercy. This was his desire, and for this purpose he gradually made his way to Dvaraka and entered the palace of Rukmini-devi.

At the time of Sri Narada's arrival, Krsna was lamenting in His own room. He had covered Himself with a cloth and was pretending to sleep. Narada Muni announced to all of Sri Krsna's queens and other associates present in the palace that Sri Uddhavaji is the greatest recipient of His mercy. When Uddhava heard this He said, "I used to think I was the greatest recipient, but when I went to Vraja my dream was broken. I woke up from that dream and I realized that I am not at all qualified to receive His mercy. The gopis of Vrndavana are the greatest recipients, and they have the highest moods of devotion."

Hearing this, Sri Balarama's mother, Srimati Rohini-maiya, became angry and told Uddhava, "What are you saying? Is there anyone more unfortunate in the whole universe then the residents of Vrndavana, and especially the gopis? Can you tell me the symptoms of one who has received Krsna's mercy? Is it a symptom that one weeps day and night in feelings of separation? Do you know the condition of the Vrajavasis? The cows do not eat grass any longer and all are about to die. When Krsna left Vraja, Mother Yasoda lamented so bitterly. Hearing her lamentation, the birds and animals wept, the stones melted - and even a thunderbolt would melt upon hearing her lamentation. Her cries were so pathetic that everyone's heart would melt. Only the heart of one person would not melt, and that is He who is sitting here before you - Krsna."

Rohini raised the point: "What did Krsna do for the Vrajavasis? From the very beginning He did not do anything, and at the end He simply left them and went to Mathura. In Mathura He became a royal prince and he is now worshiped by all demigods. He became a great personality and completely forgot the gopis and gopas, Giriraja Govardhana, Vrndavana, Syama Kunda and Radha Kunda. He is a very cruel personality."

Continuing to criticize Sri Uddhavaji's conclusion that the Vrajavasis and especially the gopis are the greatest recipients of Krsna's mercy, she said, "O Uddhava, before Krsna was born in Vraja, there were no disasters or calamities there at all. Everyone lived together with great love, peace and happiness. From the moment He took birth, however, all types of disasters fell upon the Vrajavasis because of Him. First Putana came and ate many babies. Then Trnavarta came, spread dust everywhere and blinded everyone, and Mother Yasoda wept helplessly as he lifted Krsna into the air. Sakatasura then came, all wept, and when Sakatasura was killed all thought, "Krsna has been saved by Bhagavan." Aghasura then came, and all the children of the Vrajavasis entered his body and he tried to eat them. Another time, while Krsna was playing with the other children, He pulled down the Yamala-Arjuna trees So many children could have been killed at that time, but they were saved by the mercy of Bhagavan. In all these situations it was the Vrajavasis who suffered, not Krsna.

Later on Krsna told the Vrajavasis, "Give up your Indra puja." As a result of this there was heavy rain and all the Vrajavasis were suffering and shivering from severe cold. For whom were they suffering? For your Prabhu."

Srimati Rohini devi continued, "Kamsa sent Kaliya to Vrndavana, and at that time also the Vrajavasis underwent tremendous suffering. For whom? For your Prabhu. In fact, since the time of Krsna's birth, the residents of Vrndavana never saw any happiness - only suffering. And in addition to that, Krsna never made any endeavor to take away their suffering."

What are the symptoms of bhakti?

"The cultivation of activities that are meant exclusively for the pleasure of Sri Krsna, or in other words the uninterrupted flow of service to Sri Krsna, performed through all endeavors of the body, mind and speech, and through the expression of various spiritual sentiments (bhavas), which is not covered by jnana (knowledge aimed at impersonal liberation) and karma (reward-seeking activity), and which is devoid of all desires other than the aspiration to bring happiness to Sri Krsna, is called uttama-bhakti, pure devotional service." (Bhakti-rasamrta-sindhu 1.1.11)

This definition states that everything should be engaged in Krsna's service, and this is presented by Rohini-maiya in an indirect way. She is asking, "What did Krsna do for the Vrajavasis? Did He do anything for them? Numerous demons came to Vrndavana, such as Sakatasura, Putana, Aghasura and Kesi. There were tremendous problems and all the Vrajavasis suffered in a multitude of ways. Still, they never wanted anything for themselves. They only wanted Lord Krsna's happiness; all of their endeavors and moods were only for Him. All the Vrajavasis have prema. The gopis have prema, and the gopis have the highest prema in all its successive stages such as sneha, mana, pranaya, raga, anuraga and up to mahabhava. Nanda Baba and those in parental mood have up to the limits of anuraga. Srimati Radhika's moods are the highest and all Her moods are completely dedicated to Krsna's service to the fullest extent.

Why is it that Krsna never did anything to relieve the Vrajavasis from their suffering, whereas they did everything for Him? Srimati Rohini-maiya gave the answer. The Vrajavasis are mohita, bewildered. They are not bewildered, but "like" bewildered. They came under the control of Krsna as if hypnotized or as if under the control of a magician. A magician can perform many tricks, and no one knows how he does it. Sometimes, in front of everyone, he will take his own son, put him in a box and appear to cut off his head. He will take the head and lock it in another box - and everyone thinks the son has been killed. The magician then calls for his son and the son comes running to him - completely healthy. All thought he was dead, but it was not true. What is the meaning of this analogy? By His Yogamaya potency, through the influence of His sweetness - His lila-madhuri (sweetness of His pastimes), venu-madhuri (sweetness of His flute playing), prema-madhuri (sweetness of His love), and parikara madhuri (sweetness of His associates) - He "bewildered" all the Vrajavasis. This is not an ordinary type of bewilderment like material magic or hypnotism, however. Such things cannot work on the Vrajavasis; they are far beyond that. What to speak of the Vrajavasis, any kind of magic will not even work on ordinary devotees in this world. Rather, the Vrajavasi's have been bewildered and controlled by krsna-prema.

Being thus enchanted by krsna-prema, none of the Vrajavasis wanted anything for themselves. No one wanted their own auspiciousness. They only wanted Sri Krsna to be happy and His life to be auspicious. They wanted that whatever problem came to Him should not reach Him, but rather should come upon their own heads.

What is the meaning of mangala aratika? To offer aratik means to say, "May all problems, difficulties and whatever inconveniences you feel be gone. I will take all these problems upon my own head. All your problems should fall upon me." This is the mood of the Vrajavasis. Whatever is dear in this world should be for Krsna's happiness - mother, father, friends, brothers, wealth, animals, home, land, and so on. The Vrajavasis can leave everything - simply for the happiness of Krsna.

Our nature, on the other hand, is opposite. We are not like the Vrajavasis. We can easily give up Lord Krsna for the sake of material happiness. For the happiness of meeting with the opposite sex, we can give up the endless nectar of krsna-prema and bhakti-rasa (the transcendental mellow taste of our relationship with Krsna). Persons who give up the association of Vaisnavas and hari-katha for the sake of some temporary insignificant happiness in this world are the most unfortunate. We should not be like them. We should try to be like the Vrajavasis, whose all activities of the body, such as eating, sleeping and decorating themselves are only for the happiness of Sri Krsna.

The Vrajavasis never considered that Krsna is God. They never saw Him as Devaki-nandana or Vasudeva-nandana. They always saw Him as Yasoda-nandana and Nanda-nandana, and their love for Him was natural. It was their very nature.

Rohini-maiya concluded her statements by saying, "What should I say and to whom should I say it? Who will listen? Your Prabhu - this Krsna - how selfish He is! He has now become the son of Vasudeva, and He has become like a king. He has given up all the apparel He wore in Vraja, such as the vamsi (flute) and mora mukut (crown with peacock feather). He has no care for the Vrajavasis. He has care only for Devaki and the members of the Yadu dynasty.

Even when He was in Vraja He was selfish. He always had a selfish pursuit, like stealing butter from the homes of the elderly gopis and then hiding from them, what to speak of His cruelty in leaving them and going to Mathura. When the time came to come to Mathura He forgot everything regarding Vraja. He became like a king and many great personalities began worshiping Him. Why should He remember these simple villagers? He is very cruel.

"To whom should I tell this story? No one will listen."

Rohini spoke in the form of complaint, but actually she was revealing the nectar of Vraja krsna-katha. There is a very deep meaning behind her words, but she could not openly disclose this because of her vatsalya-bhava. As Lord Krsna will explain later when He Himself begins participating in the conversation, He wants to relieve the suffering of the gopis and the other Vrajavasis, but He is helpless. He cannot do anything to appease or satisfy them, because whenever He would try to do so the result was only an increase in their mood of separation. In the case of the gopis, this was true even when He was in Vrndavana, what to speak of after He left for Mathura and Dvaraka. Sri Krsna will later tell His queens that He can give them all up at any moment He told them that He only married them because, due the fact that they bore some similarities with the gopis, He could remember the gopis when He would see them.