All Turned to Lord Balarama 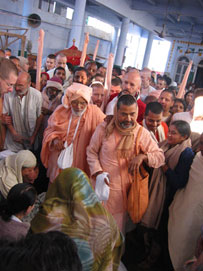 [This is the tenth class you are receiving from Srila Narayana Maharaja's series of classes on Srila Sanatana Gosvami's Srimad Brhad Bhagavatamrta. To summarize the previous classes in a nutshell, Sri Narada Rsi had been traveling all over the universe in search for the most exalted devotees, those who are the greatest recipient of Lord Krsna's mercy. His search brought him to Dvaraka, where he was looking for Uddhava. In front of Baladeva Prabhu, Rohini dasi, Devaki dasi, Krsna's queens and other associates, Uddhava expressed his feelings that the Vrajavasis and especially the gopis are the most exalted. Gradually the discussion amongst them came to the question of whether or not Sri Krsna should go to Vrndavana, and whether or not He was cruel for not having already gone. Different associates had different opinions.

The following is a translation of Srila Maharaja's Hindi class of September 5, 2003:]

Srimati Rohini devi concluded that Sri Krsna is very cruel-hearted, but Srimati Rukmini devi and Satyabhama devi tried to give evidence that His heart is very soft. Krsna then asked Uddhava how He could remedy the situation of the suffering of the Vrajavasis.

Krsna concluded that He should write a letter to the Vrajavasis stating, "O most beloved Vrajavasis, now I have some responsibilities in Mathura, such as killing the demon Jarasandha and others like him, and I must also satisfy the Yadu dynasty. After I have done this I will very quickly come to Vrndavana."

When Uddhava heard that he would again be sent to Vrndavana with a message from Krsna, he said, "This is quite absurd. There is no other remedy except for You to personally go to Vrndavana, because the Vrajavasis do not want anything else in this world or in the next world. All they want is the sight of Your lotus feet again in Vrndavana." Uddhava somewhat knows the hearts of the Vrajavasis because he spent three months there and took prasadam prepared by them. Therefore, he was controlled by the prema of the Vrajavasis.

Krsna's cowherd friends love Him so much. If Krsna would disappear behind a tree even for one-eleventh of a second, they would bitterly cry, "O Krsna, O Krsna." They have so much affection for Him that they cannot tolerate Him leaving for even one moment When Nanda Baba took Krsna and Balarama to Mathura, all the cowherd boys, like Sridama, Subala and Madhumangala, went with Him. To them, one second of separation from Him is like a pralaya, universal destruction. One second felt to them like a catur-yuga, so many hundreds of thousands of years.

Only one who has mamata, a sense of possessiveness, towards Krsna, thinking, "Krsna is mine", can experience this viraha, mood of separation. The sakhas have abundant mamata for Krsna, and for that reason they feel intense separation. Yet, their separation mood is not like that of Mother Yasoda. Her mood of separation is so unbearable that she has become blind from continual weeping.

The gopis separation is still more than that of Mother Yasoda. They became transcendentally mad (divyon-mad). Of all the gopis, Srimati Lalita devi and Visakha devi have the most intense feelings of separation; and even more than theirs is the separation of Srimati Radhika.

In order to be able to posses this mamata, one must first have such feelings toward Sri Gurudeva and the Vaisnavas. In this world there is no prema. We must first develop a relationship with Guru and Vaisnavas, and then prema towards Krsna can manifest in our hearts. There should be no self-interest at all; then our mamata can become pure and we will experience the mood of separation as a result of that mamata.

The gopis feel intolerable separation when Krsna goes cow-grazing, and their separation is mitigated by seeing signs of His return. They may see the dust kicked up by the cows in the distance, or they may hear the sounds made by His flute and horn. At that time all the Vrajavasis have such mamata for Him that no one stays in their houses. Everyone comes out on the path to see Him, and this is very natural - it is not artificial at all.

We see these days that due to the influence of time there is no prema at all - rather there is only self-interest. What to speak of having prema, we have no real affection for Guru. As time passes people even become against Guru. Prema is only available in the spiritual world. The gopis' prema is without any self-interest at all. Why does Krsna go to the forest? Does He go for cow-grazing? No, not at all. Cow grazing is only an excuse. The actual fact is that He is very anxious to taste prema-bhakti rasa, the resting place of which is in the Vrajavasis, gopas and the gopis. Lord Krsna's going out for cow-grazing is only an excuse to enjoy pastimes with the sakhas, to see the beauty of Vrndavana, and especially to enjoy with the gopis.

["All glories, all glories to Sri Vrndavana-dhama, where Sri Murari enjoys residing more than He does in the heart of sadhus or even in Vaikuntha, where He forever tends cows, and where, by playing sweet melodies on the flute, He increases the gopis' amorous love for Him."]

Srila Sanatana Gosvami is explaining the beauty of Vrndavana. All glories to Vrndavana where Lord Sri Krsna always plays here and there on His flute, giving happiness to all the cows and gopis. By the melody of His flute He has expanded prema-rasa within the hearts all His associates and especially within the hearts of the gopis. This prayer describes the beauty of Vrndavana. The word "ramayati" in this prayer refers to the gopis. Otherwise, ramayati may refer to any beloved who gives happiness and pleasure. Because the meaning is related only with Vrndavana, it can only mean the gopis.

Vrndavana is so beautiful. There, all types of fully blossoming flowers and all seasons are present. The cuckoos sweetly chirp and the water of the very beautiful Yamuna is pure, clean and transparent. Lush grass grows in all ten directions there, and therefore the cows don't have to go outside for cow-grazing. There is no envy or any type of jealousy in Vraja Mandala. There are no dangerous animals; only deer and rabbits and other peaceful animals decorate Vrndavana dhama. When Sri Krsna goes cow-grazing, all the animals surround Him on all four sides. Krsna attracts them and gives them happiness by playing His flute.

What is the necessity of Krsna going out for cow-grazing? Since there are no dangerous animals in Vrndavana's forest, and since there is an abundance of fresh grass there, the cows don't need anyone to take them - they can go independently. There are so many beautiful and enchanting ponds and lakes there, like Radha-kunda, Syama-kunda, Kusuma-sarovara and Manasi Ganga. They all have attractive waves, many bees swarming here and there, and wonderful birds such as swans floating happily on their lakes. The manjaris of the flowers are imbued with so much sweetness that the bees never leave them. The water of the ponds is so pure that Sri Krsna, the sakhas and all the cows drink from them. At Kusuma-sarovara there are also so many lotus flowers in that wonderful place that even the breeze becomes maddened and moves from side to side like an intoxicated person.

The Yamuna is also attracted to everything in Vrndavana, and that is why she does not like to go outside. She moves very slowly and in a crooked way. There in Vrndavana Vrnda devi arranges everything required for the pastimes of Sri Sri Radha and Krsna.

Not only are all these rivers and ponds clear and sweet, but the sand on their banks is very soft and fragrant. There are many types of trees and vines growing on those banks, and those trees, such as the kadamba, have nice flowers that scent the atmosphere and make everyone happy.

Even though there are no snakes, tigers and bears in Vrndavana, if they would be there they would lose all their duplicity and anger and would reside with other animals with love and affection. Even snakes and mongooses, and tigers and deer, would forget their natural enmity. They would be friends and embrace each other. Such is the atmosphere in Vrndavana, and Krsna enjoys all these aspects of Vrndavana; He used cow-grazing as an excuse to go out.

Just as the birds quarrel, sometimes in Kosi Sri Krsna and Srimati Radharani quarrel - and Srimati Radharani defeats all of Krsna's arguments. Sometimes Krsna goes to the home of Srimati Radharani and knocks on the door. She asks, "Who is there?" Krsna says, "It is Hari." Radhika, taking hari to mean monkey or lion, laughingly replies, "What is the need of a monkey or a lion here? Is it that You want to scratch Me? You should quickly run away to a dense forest. We are all scared of lions and monkeys here." Then Krsna replies, "I'm Krsna." The word krsna also happens to mean black snake. Radhika therefore says, "If You are krsna, a black snake, then what need do You have to be here? Do You want to bite Me? Go to the forest. You have no purpose here." Krsna replies, No, "I'm Cakri." Cakri also means potter. Radhika therefore says, "There is no need for a cakri here. No wedding festival is being held in My house. Take Your clay pots and go to a place where a marriage is being celebrated."

So Krsna never simply goes for cow-grazing. He resides in Vrndavana just to have these kinds of conversations and feel happy.

And all the gopas and gopis have very sweet voices there. This is the beauty and wonder of Vrndavana, and even the demigods pray to take birth in Vrndavana.

[My greatest possible good fortune would be to take any birth whatever in this forest of Gokula, and have my head bathed by the dust falling from the lotus feet of any of its residents. Their entire life and soul is the Supreme Personality of Godhead, Mukunda, the dust of whose lotus feet is still being searched for in the Vedic mantras. (Srimad Bhagavatam 10.14.34)]

"I want to take birth in Vrndavana. I am not qualified for this, but if Krsna bestows mercy upon me then maybe I can take birth in Gokula as a stone. Then I will be very lucky." The sweepers rub their feet on the stone after a hard days work, so Brahmaji is praying to be that stone in that Gokula.

It was Srimati Rohini devi who gave this description of the beauty of Vrndavana - in response to the statements of Padmavati, the mother of King Kamsa. When Padmavati heard the glories of Vrndavana she said, "Rohini, you talk too much. If Vrndavana is so sweet and attractive, and if there is no jealousy there, then why are the cows there dying?" When Krsna heard this His mouth dried up and He became practically unconscious. Nobody knew what to do, so everyone turned towards Sri Balarama.

Lord Balarama knows Vrndavana. He was with Krsna there, as well as in Mathura and Dvaraka. So Lord Krsna and everyone else present turned towards Lord Balarama.

Balarama said, "O Krsna, not only are the cows in this position. Even the peacocks, birds, trees, plants, creepers in the kunjas, and all the grass in the gardens, are about to leave their bodies. And all the ponds and the Yamuna have become dry - due to separation from You."