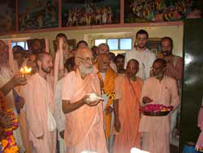 Which is greater – puja (worship) or stuti (making our offerings full of love). Simply ringing bells and performing arati is not sufficient. These activities should be full of emotions, bhava, and our hearts should be attached to the object of worship. During this month, if we pray to Sri Krsna, Srimati Radharani will be pleased, and if we pray to Srimati Radharani Krsna will be pleased. This is the way to make our offerings in this month.

This month of Kartika comes after the rainy season. It is a very beautiful season and it has been described in the Srimad-Bhagavatam. Yamuna and other rivers, as well as all ponds and kundas, become very sweet and clean. Many flowers bloom and bumblebees hum over them. The atmosphere and weather at this time is very pleasing and Lord Krsna is in an ecstatic mood. He smiles with His flute in His hand and enters Vrndavana along with His brother. At this time there are many tulasi plants with manjaris on them, so many bumblebees humming over them, and cuckoos singing. The narration of the description of all this scenery it is so elegant and sweet, and therefore we can only imagine how beautiful the real Vraja with Krsna will be. All stimulants are present, and therefore Sri Krsna performs His rasa dance during this time. 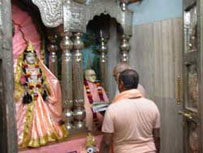 Especially, today is the anniversary of the disappearance of our Gurudeva Srila Bhakti Prajnana Kesava Gosvami Maharaja Today is a most auspicious day. Srila Gurudeva disappeared from this Earth and entered into rasa, and this fact was established by Pujyapada Sri Rupa-Siddhanti Maharaja. He declared that Srila Gurudeva entered into this pastime. He gave this thought to all his disciples and he established his samadhi along with his disciples. He established that Srila Gurudeva disappeared from this world in Saradiya-purnima. Gurudeva had a desire to enter into Sri Krsna’s Saradiya-rasa dance. He disappeared in the evening time when the moon was rising, as it is described in sastra regarding the commencement of Sri Krsna's rasa-lila.

Whatever I explain from various scriptures, such as Sri Brhad-Bhagavatamrta and others, I received from my Gurudeva. We are enjoying his grant to us. In other words, by his endeavor we are preaching and doing bhajana. There is so much opposition, but because of him this opposition is ineffective. If the foundation of a building is very deep and strong, a good building can be erected. Similarly, because of his preaching we are now preaching very easily, without any difficulty or obstruction. 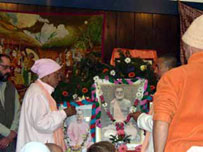 We do not understand the value of guru, and especially of siksa-guru. If diksa and siksa-guru are the same person, that is a wonderful position. The importance of siksa-guru should be realized. He teaches his disciple in visrambha-bhava, intimacy. He does not have the awe and reverence relationship with his siksa disciple. I was very open and frank with my Gurudeva. I asked him many questions from texts such as Sri Ujjvala-nilamani. For example, I’d thought that the wives of Krsna are in srngara-rasa svakiya-bhava (wedded conjugal love), but Gurudeva said they are in dasya-bhava. I asked, “Why did you say they are only in dasya-bhava?" Gurudeva replied, “You will understand it later on.” Now I realize how he was correct. He made a platform and on that platform we are creating this castle. Sri Gaudiya Vedanta Samiti was established by him, and it is so much indebted to him. We, his first sannyasa disciples, understood him by serving him. Srila Vamana Maharaja and I used to spend a lot of time with him, and Srila Vamana Maharaja had even more chances than I to be with him. If one wants to be a real servant, he must be like Param-pujyapada Srila Vamana Maharaja.

Srila Gurudeva used to be able to write a book in three days. He would speak so eloquently, and Srila Vamana Maharaja would write down his words so nicely, that no editing was required. A book would be ready without the delay of editing and proofreading.

He disappeared on this day, and that is not an ordinary thing.

From his childhood he displayed the characteristics of an elevated devotee. His mother was a very strong lady, and she showered her affection and disciplined him. When he came home late one night his mother was waiting for him with a stick in her hand – waiting to chastise him. She asked, "Why are you late?" He stared at her and didn't say anything for some time. When she asked again and again, he said softly, "My friends and I have made a club and we are making a fund. Whatever money we get, we don't spend on ourselves. We use it to help the poor, downtrodden, and diseased people. Today there was an old lady who had cholera, an infectious disease, and nobody was there to look after her. The doctor prescribed medicines, and she became a bit relieved by this medicine. I left a colleague there with her and came home, but I have come late." When Gurudeva's mother heard this, she began to weep, the stick fell from her hand, and she said, "I will never chastise you again."

Parama-gurudeva was extremely compassionate toward other living entities from his childhood, so when he accepted his Gurudeva, how much greater was his condition? I used to go here and there, preaching with him, and he walked so fast that it was not possible to keep up with him. I’d thought I was a good sportsman, a good runner and fast walker, but I used to fall behind my Gurudeva’s pace.

Srila Gurudeva was so much concerned for the living entities; he felt pain for all of them, and that is why he was able to preach so nicely. Now, we are preaching according to his teachings and because of his mercy.