The Appearance Place Of Srimati Radharani 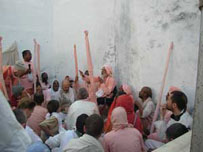 [Just as the moon was produced from the churning of the Milk Ocean, You have arisen like the new moon from the ocean of Vrsabhanu Maharajas affection for You. O dearmost friend of Lalita! O You who have captivated the heart of Your intimate sakhi Visakha with Your charming (lalita) qualities of friendship, kindness and loyalty to Krsna. (Sri Sri Radhika Pada-Padme Vijnapti verse 3)]

Srimati Radhika is very near and dear to Sri Vrsabhanu Maharja. Therefore, most people call Her Vrsabhanu-nandini, the beloved daughter of Vrsabhanu Maharaja. Very few people call Her Kirtida-nandini. The word ravel means great landlord, and therefore this place is named after Vrsabhanu Maharaja. One early morning he went to the Yamuna to bathe, and there he saw a very effulgent thousand-petal lotus flower. In the middle of the lotus was a very attractive baby girl  Srimati Radhika. With great affection he took that girl to his house, gave Her to Kirtida-sundari, his beautiful wife Kirtida, and they adopted Her. 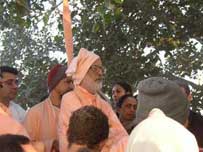 Srila Bhaktivedanta Narayana Maharaja in RavelSometimes Srimati Radhika appears directly in Varsana. There, Sri Vrsabhanu Maharaja went to Vrsabhanu Kunda early in the morning and, just as here, he found Srimati Radhika there on a thousand-petal lotus.

Understanding that the Supreme Lord, sarva-saktiman (the all-powerful) Sri Krsna had already appeared on Earth, Sri Narada Muni concluded that His svarupa-sakti, His complete internal potency, Srimati Radhika, must have also appeared somewhere. He went to the house of Vrsabhanu Maharaja and, after receiving his obeisances, asked him if he had any children. Vrsabhanu Maharaja replied, Yes, I have a son named Sridama. Rsi Narada asked, Do you have a daughter? Vrsabhanu Maharaja replied, Yes we have one daughter. Rsi Narada said, I want to see Her, to give Her blessings and read Her future.

Srimati Radhika then displayed Her kisori form  Her ever-present, eternal form as a thirteen and a half year-old girl  along with Lalita, Visakha and all the asta-sakhi gopis. At that time Sri Narada Muni felt very happy. That is why he is always present in Vrndavana  to get the darsana of Srimati Radhika.

Our hope is that by coming to this place, by hearing the hari-katha from the lotus mouth of Sri Guru, and by touching the dust here, this appearance place of Srimati Radhika may also appear in our hearts and give us mercy and inspiration. Our hope is that Her nearest and dearest, Sri Guru, will pray for us so that we will one day become Her maidservants