Sri Krsna's Boat and Other Pastimes 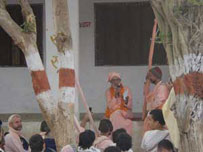 [The October 10 - November 10, 2003 Kartika Vraja-mandala Parikrama is well underway. During this time Parama-pujyapada Srila Bhaktivedanta Narayana Maharaja has been giving classes daily, in mornings and evenings, first in Vrndavana and now at Govardhana. Sometimes he also joins the parikrama pilgrims - over 700 Westerners and 300 Indians - at the holy pastime places, to inspire all present. He sings verses and bhajans during his classes more and more these days, and in the following discourse he led the devotees in singing Srila Visvanatha Cakravarti Thakura's "Sri Govardhanastakam." He mainly spoke in Hindi, and we have transcribed the few words he spoke in English.]

["May Govardhana Hill fulfill my deepest desire - to get darsana of Sri Radha and Krsna's lilas. By Sri Krsna's mercy Govardhana became the emperor of all mountains, and received the offerings meant for Indra despite Indra's enmity."

We pray to Giriraja Govardhana to sprinkle his mercy upon us. If we pray sincerely, he will at once mercifully give us what we want. This prayer is written by Srila Visvanatha Cakravarti Thakura, who is saying, "O Giriraja Govaradhana, kindly bestow your mercy upon me."

["Feeling the softness of his dearmost Krsna's soft lotus hand when he was being held aloft by Him filled him with so much ananda that he did not even notice Indra's thunderbolts striking his body. May that Govardhana fulfill my desire." (Sri Govardhanastakam verse 2)]

When Indra was throwing his thunderbolt and trying to inundate Giriraja Govardhana with water, the thunderbolts were breaking into many pieces before they reached him because he was protected by Sudarsana Cakra, and he felt unlimited happiness.

["Demanding a road tax, Krsna quarreled for several hours at Dan Ghati with the daughter of Vrsabhanu Maharaja. Rasika-bhaktas visiting Govardhana are eager to listen to that sweet prema quarrel. May that Govardhana fulfill my desire that I also can hear that verbal battle." (Sri Govardhanastakam verse 3)]

When the gopis were bringing their pots of ghee and yogurt to a sacrifice, Sri Krsna stopped them at Dan Ghati and began a loving quarrel with them, demanding a tax for their goods. He told them, "I am the lord and king of Vraja." When He insisted that He was the owner based on the fact that He was married to Vrnda, the gopis told Him, "You? You think, 'I am the husband of all the gopis in Vraja'. You are very crooked, a cheater, black inside, outside, and everywhere. Black black. No Vrajavasi girls want to marry You, but you want to forcibly marry them."

["In the middle of Manasi Ganga, Sri Radha was sitting in Krsna's boat. When the boat began to sink, She tightly clung to His neck. Together They.looked very beautiful. May that Govardhana (who provides the setting for this secret lila fulfill my desire." (Sri Govardhanastakam verse 7)]

Here the gopis were quarrelling with Krsna, who said, "O gopis you should all come on My boat. I will take you across this Manasi Ganga River. Don't worry, I will take you across." All the gopis climbed on the boat and Krsna took them to the middle of the river, where there were many waves, and there He began to rock the boat and say, "You should at once give up your vessels of butter." They did so, and after that He said, "Still now My boat will sink; so give up your clothes." The gopis said, "We cannot do this. We are not like You, who are shameless and crooked. Why did you take us here?" He then began rocking the boat more strongly, Srimati Radhika at once caught hold of Him so She would not drown, and He became satisfied.

[The sun shone brightly and the sky was clear. Tightly surrounded by over 1,000 eager followers, Srila Narayana Maharaja sat on the steps leading down to the kunda, and told them all:]

All of you should do pranama and take acamana.

Seeing the cowherd men preparing for an elaborate sacrifice to worship Lord Indra, Sri Krsna told them, "We should worship Giriraja. Why are we worshipping Indra?" Nanda Baba, Upananda and all the other Vrajavasis agreed and began to worship Giriraja. Indra became very worried and angry; he thought, "Why are they worshipping this stone instead of performing my puja? I will destroy them." He then ordered the clouds to make heavy rainfall there, and thunderbolts and rain fell for seven days.

But Giriraja Maharaja was very happy that he was sitting on the hand of Lord Krsna. Thunderbolts fell upon his body, but they felt very pleasant because he was in the hand of Krsna. Indra soon realized that Krsna is not a gopa, a cowherd boy; He is the Supreme Personality of Godhead Himself. He is Lord of lords. He therefore went to Surabhi and said, "O Ma! You are mother of all worlds! Please come with me and beg Lord Krsna to forgive me." Indradeva then came with jars full of Akash Ganga-Mandakini water, (Akash Ganga means Ganga in the heavenly planets, where she is known as Mandakini. She has different names in different places) Surabhi came with her milk, as a mother; and Lord Krsna became pleased.

Surabhi Kunda is Surabhi herself. Her water is milk, because Indra performed Krsna's abhiseka with her milk. Most kunda water is not tasty, but the water here is very tasty. Even though her kunda appears somewhat dirty, you should not think it is so. You should take acamana and offer pranama.

Now, all devotees should sit in long, long lines, so you can very easily serve prasadam. Our brahmacaris should direct them where to sit.

Don't take any Govardhana sila; this can be very harmful for you. If you want to take a sila, take it from your Gurudeva and from pure Vrajavasis. You also will have to give gold equal to the same weight as Girirajaji - leaving it in the same place from which you took the sila - otherwise you may not take him. So many devotees took silas from here or anywhere on Govardhana, and then they went to their Western countries and were destroyed. Do not do this. If you want to take a sila, tell your Gurudeva and pure Vrajavasis. Then, with their permission, guidance and blessing, you can take him.