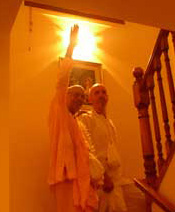 [Srila Narayana Maharaja usually arrives at an airport about two hours before his flight. Before each flight he usually sits on one of the chairs in the airport lobby while his assistants wait on line at the ticket counter and arrange for his boarding pass. While waiting for them, he usually gives a short darsana for his disciples who sit on nearby chairs or on the lobby floor around him. During those darsanas he usually asks questions of them and also answers their questions.

The following is a transcription of the airport darsana held in Kuala Lumpur, Malaysia, just before Srila Maharaja boarded his plane to return to India.]

[Srila Narayana Maharaja, speaking to Lalita dasi, his lawyer-disciple living in Kuala Lumpur:] Lalita, the devotees here – Vijaya, Dr. Parama and all others – are trying to make a preaching center. They have bought land and I want it to be developed. You all should encourage them and help them. If any legal issues come up, you should help. Also, I want you to try to come again to India during Kartik.

[Speaking to three sisters – Gayatri dasi, Gopali dasi and Nandini dasi – who are in their late teens and early twenties, and who live with their devotee parents in Kuala Lumpur:] You are all very qualified. You will have to be brahmacarinis. Preach my mission and engage in book distribution. We are going to make a preaching center here, and so many books will come there. You can distribute books, and you can take the profit to maintain yourselves. Are you studying now?

[Gayatri dasi:] I finished my studies five months ago but I want to work with Chinese medicine. One doctor has been waiting for me to work for him for the past four or five months, but I have not done anything yet. Should I work for him, or do anything else? What is your instruction?

[Srila Narayana Maharaja:] To maintain yourself you can work; no harm. But preach also. Preaching is prominent. Your younger sister should also help with preaching and book distribution.

[Gayatri dasi, handing Srila Maharaja a fiberglass statue of two babies hugging leaning against each other] These are my sister’s deities. She bought this when she was sick. Now she cannot remember anything of her first fifteen years. She thinks of them as Radha-Krsna and ornaments them.

[Srila Narayana Maharaja:] You bought this from the market? Why isn't it Radha and Krsna in Their good form? This cannot be worshipped. I want you to have very beautiful Radha and Krsna deities.

[Devotee:] When you were in Australia a few days ago, you said that when Sri Uddhava came to see Nanda Baba, Nanda Baba said, "I tried to forget Krsna when He left for Mathura. I left the house and went here and there to forget Him. I went to the place where He performed rasa-lila with the gopis, and that place made me remember Him." From what I understand from all your other lectures and books, it seems strange that Nanda Baba would know about Krsna performing rasa-lila with the gopis.

[Srila Narayana Maharaja:] I said rasa-lila, but I meant that Nanda Baba went to a lonely place – a kunja – to forget Krsna. But as it turned out, that place was actually a rasa-sthali, one of the places where Sri Sri Radha-Krsna and the gopis performed their rasa-lila. There he thought, “My son was playing here, and He was often engaged in singing and dancing here with the gopis." From his pint of view there was no harm in that, because they were babies playing; they were about five or six years of age. Although Radha and Krsna and their friends were actually teenagers, Mother Yasoda and Nanda Baba's vision of them was that they were still very young children – so no harm.

[Sripad Madhava Maharaja:] Everywhere he went he saw Krsna’s footprints, and that stimulated his mood of Krsna being here and everywhere.

[Srila Narayana Maharaja:] Does Mother Yasoda know Srimati Radhika? And what does she know about Her?

[Devotee:] She knows that Krsna loves Radhika more than herself, and that they play, but innocently, like children.

[Srila Narayana Maharaja:] Also, she is determined in her heart that, "I will give Krsna in marriage to this very beautiful girl." But although she thinks this way, she considers, "Oh, now They are babies." She doesn't know exactly what kind of love and affection there is between Them, or that They engage in pastimes like rasa-lila and nisanta-lila. She cannot know this. Yogamaya will help Them so that no elderly family members will know.

[Devotee:] On Advaita Saptami she heard that Sri Caitanya Mahaprabhu went to Advaita Acarya's school to pick up His brother, and within his mind He said to him, "You called Me to come to this world, but you don't recognize Me. One day you will recognize who I am." So she is asking, ‘When did that happen that he began to recognize Mahaprabhu as Krsna?’”

[Srila Narayana Maharaja:] When he was praying to Sri Krsna with tulasi and Ganga-jala (Ganges water) he knew that his Lord would come. But who his Lord was, he did not recognize. Afterwards, when he saw the pastimes of Sriman Mahaprabhu – how He revealed Himself as Varaha-deva, Lord Krsna and Lord Rama – then he knew, and he prayed, "Oh, He is my Prabhu, my Lord."

[Devotee:] Almost every year, on Parama-Gurudeva's appearance day, you mention the story about how you and Nrsimhananda brahmacari preached throughout the villages neighboring Calcutta, and how you collected 250 rupees and returned to your Gurudeva's matha. Parama-gurudeva told Nrsimhananda brahmacari that he wanted to take, for a moment, the 25 rupees that Nrsimhananda brahmacari withheld for immediate expenses – to get rid of the poison. He said, "Then I will give you back 25 rupees for your personal expenses, but it has to come in my possession first, so that the poison will be removed." We are preaching around the world, and we receive donations and give you the money we collect. But we only give you what we receive when we already have $100. That is because you once told me to keep $100 with me for expenses and emergencies. Is that $100 dollars poisoned because it didn't go into your pocket first?

[Srila Narayana Maharaja:] I have purified it – by my order – and given it to you. You should keep it for your expenses. One hundred dollars should always be in your pocket, because I have given it. It is free from poison. I have told this to all my preachers – Vana Maharaja, Aranya Maharaja and others. For some I have said to keep more than $100. You are always with me so there is not so much need for you to keep more. Padmanabha Maharaja can keep more. Aranya Maharaja gives me whatever he collects, and I again give him 100 dollars. You should not have any problems. You should have what is needed. In different countries you may not be sure where to go and how to get what you need for your service to me.

[Srila Narayana Maharaja:] It is said that this flower is the "King of fragrance". Even if it has dried out for one month, it is still fragrant.

[Padmanabha Maharaja:] Srila Gurudeva, is this flower the same as those on the Siddha Bakula tree in the garden of Srila Haridasa Thakura?

[Madhava Maharaja:] Yes, even after this flower has been dry for one month, if you add water to it the fragrance increases.

[Vallabhi-kanta dasa introduced a friend of his to Srila Maharaja, who said to that man:]

In April, when I return here, you must meet me and hear my classes – and also try to be happy. Without chanting the name of the Supreme Lord no one can be happy. One day you will be old, and after some days you will have to give up your body. Whatever you have collected throughout your life – nothing – not a farthing or a ringet (Malaysian money) – will go with you at the time of death. Not even your body will go with you. Chanting the holy name is very powerful, and this will help you. So be ready, because I am coming in April for a few days.

Now I must go. Thank you all. Now, my children, my sons and daughters, you should return to your homes – and we will meet again after one or two months.
Transcriber and typist: Vasanti dasi
Editor: Syamarani dasi