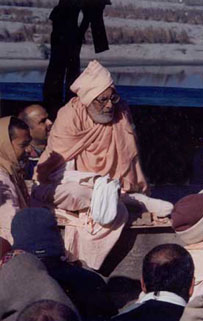 [ This year's Navadvipa-dhama parikrama (2004) was performed in Vrndavana. Navadvipa is gupta Vrndavana - hidden Vrndavana. Similarly, Navadvipa is hidden in Vrndavana. On March 5, Srila Narayana Maharaja took the assembled devotees to Ravel, Brahmanda Ghata and Gokula Mahavana. The following is a transcription of his short talks there.]

RAVEL
What is the meaning of Vraja? Vraj is the root word of vrajati which means "to go", "to move" or "to wander". The residents of this place were always moving. At first they were staying in the area of the Vrndavana forest, but because of disturbances by demons they left Vrndavana forest and came here to Gokula, Mahavana. Before the appearance of Srimati Radhika and Sri Krsna, Nanda Maharaja and Yasoda-maiya were staying in Gokula Mahavana and Vrsabhanu Maharaja was staying here in Ravel. After Radha's and Krsna's appearance Krsna's parents moved from Gokula to Chatikara, to Dig, to Deraveli, to Kamyavana and finally to Nandagaon. Vrsabhanu Maharaja's family also moved from place to place, always nearby to the places where Sri Krsna lived. The residents of Vraja were always moving and going to places where there was fresh grass for their cows.

Prior to the appearance of Srimati Radhika, Vrsabhanu Maharaja was living here in Ravel. The word ravel means zamindar, landlord, a great personality or chieftain. Thus, Ravel is named after Vrsabhanu Maharaja. Early one morning, Vrsabhanu Maharaja went to the Yamuna and discovered a very beautiful golden-complexioned girl playing in the center of a lotus flower. He brought Her home and put Her in the lap of Kirtida-maiya.

Today we are going to Antardvipa-Mayapura on our Navadvipa parikrama. Antardvipa is the birthplace of Sri Caitanya Mahaprabhu. Today we are going to that place which is non-different from Antardvipa, that is, Gokula, Mahavana - the birthplace of Lord Krsna. It is not possible, however, to attain the darsana of Krsna without first receiving the merciful glance of Srimati Radhika. Therefore, we have come first to Ravel.

As a small boy, Sri Krsna would play here with His friends. Once, all His friends began laughing at Him. Krsna asked them again and again, "Why are you laughing?" but they would not tell Him. Finally His friends replied, "We know that there was once a baby whose parents didn't want Him, so they hid that baby in the hollow on a tree here. Nanda Maharaja came here and found that baby, took it home and gave it to Mother Yasoda - and that baby is You. The conclusion is that You are not the son of Mother Yasoda."

Krsna was struck with wonder. "How is this possible?" he asked. They replied, "Your mother has a golden complexion, as does your father, and Your brother is white. But You are black; so where did You come from?" Krsna became upset and, continually weeping, He ran home.

Krsna did not go inside His house; but instead rolled on the ground in the courtyard and wept loudly. His mother called Him again and again, but He did not come. Finally she took Him by force, put Him on her lap, caressed Him and showed Him much affection. He told her, "I know that you are not my mother." Mother Yasoda said, "Who has told You this?" Krsna replied, "All my friends, like Madhumangala and My brother, told Me." Mother Yasoda then took a vow, keeping her hands on a Narayana-sila and saying, "Surely You are my son. You have come from my womb. I am Your mother." Krsna then became pacified.

Another pastime that took place here is as follows. One day Krsna was here, eating earth. His friends told Baladeva prabhu, and Baladeva prabhu went home and told Mother Yasoda. He said, "My brother is at Brahmanda Ghat and is eating earth." Mother Yasoda then came here in an angry mood and asked Krsna, "Have You been eating earth?" He replied, "No, I have not been eating earth." She said, "Then, let me have a look inside Your mouth." She opened His mouth and inside she saw the unlimited universes and all creation. Everything was there in all the planetary systems.

Mother Yasoda was struck with wonder and closed her eyes, thinking, "What has happened?" She did not understand that Sri Krsna is the Supreme Personality of Godhead and everything is in Him. She thought Him to be her son, and that she was now perhaps haunted by a ghost or seeing a dream.

As Lord Sri Krsna played here on the bank of the Yamuna, Sri Sacinandana Gaurahari, Krsna in the form of Nimai Pandita, Visvambhara, Saci-Suta, Jagannatha Misra Suta - would also play games on the bank of the Ganga in Navadvipa-dhama. Young girls of the village would be worshipping Lord Sankara and performing worship of the Ganga by offering sweets and other paraphernalia. Nimai would go there and tell the girls, "Whatever paraphernalia you have collected for offering to Ganga should be given to Me, and then I will give you a benediction. If you don't worship Me with all the paraphernalia, I will curse you that you will marry a man who will be very old, and you will have to share him with at least five or six co-wives." He would take their offerings by force, and when they would argue with Him, He would say, "You should not be upset. Don't you know that I am the husband of Ganga? The fruit of worshipping Ganga is My darsana."

Sometimes Nimai Pandita would come on the bank of the Ganga when the brahmanas were taking bath and remembering their mantras, and He would splash water on them with His lotus feet. He would sometimes fill His mouth with Ganges water, and after the brahmanas had taken bath and were clean and had put on their tilaka, He would spit water all over them. They would become angry, saying He had made them impure; but their conception was wrong - because He is Sri Sacinandana Gaurahari, the embodiment of supreme purity. They would become very angry with Him and go to complain to His father.

Hearing from the brahmanas, Sacinandana Gaurahari's father, Jagannatha Misra, would think, "When my boy comes back I will be waiting with a stick for Him. I will beat Him so that He will never do this again." The young girls warned Him, "The brahmanas have told Your father and now he is angry; so be careful." Nimai Pandita then put ink spots and dust all over His body and went home. His father was waiting there to give him a good lesson and said, "I heard You were causing trouble at the Ganga when You went there to take bath." Sacinandana said, "Oh father, I have not gone to the Ganga to take bath today. I have come directly from school." When Jagannatha Misra saw that He was still dusty and had ink spots from school he reconsidered and thought, "Oh, maybe they did not tell me the truth." He became pacified and did not chastise his son.

GOKULA
This is Nanda Bhavana the house of Nanda Maharaja in Gokula Mahavana - the birthplace of Krsna. It is also called Chodasi Khamba, the palace of eighty-four pillars. It is commonly said that Sri Krsna was born in Mathura, but this is not true. At midnight, Krsna appeared in the prison cell of Kamsa to Vasudeva and Devaki, but He was not born like a baby there. He appeared there with four hands holding a conch, club, disk and lotus flower - a fully grown youth of sixteen years with long hair and ornaments. Vasudeva Maharaja and Srimati Devaki devi prayed to Him, and then He became like a small baby. Vasudeva Maharaja carried baby Krsna across the Yamuna and came here to Gokula. At the same time, Mother Yasoda had given birth to two children; first to Bhagavan Sri Krsna and shortly after that to Yogamaya devi.

Krsna who appeared in Mathura is not the original Svayam Bhagavan Vrajendranandana Syamasundara. He is vaibhava-prakash, the partial manifestation of Sri Krsna who is called Vasudeva Krsna. When Vasudeva Maharaja brought that baby back to the bed of Yasoda devi, He merged into the body of Vrajendra-nandana Syamasundara, the original Krsna. Then, Vasudeva Maharaja picked up the baby Yogamaya and carried her to Mathura.

Krsna performed his childhood pastimes here, and similarly, in the form of Sri Caitanya Mahaprabhu, He performed His childhood pastimes in the house of Jagannatha Misra in Navadvipa. That place in Antardvipa and this place, Gokula, are non-different. Also in Antardvipa-Mayapura there is Srivasa-angana (the home and courtyard of Srivasa Thakura) In the association of Sri Nityananda prabhu, Sri Gadadhara pandita, Sri Advaita Acarya, Srivasa Thakura and others, Sri Caitanya Mahaprabhu, used to perform His maha-sankirtana rasa (the transcendental mellow of congregational chanting.

We are very fortunate to have come to this place by the mercy of Sri Guru and Gauranga, and we pray to the dust of this place that the pastimes here may appear in our hearts.