How To Practice Raganuga-Bhakti 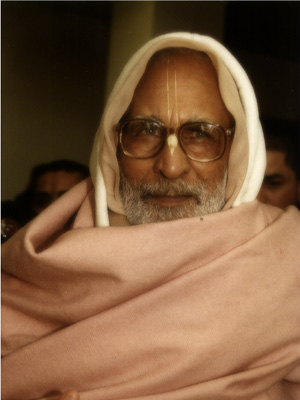 Srila Maharaja began his Sixth Chapter Sri Bhajana-rahasya series of classes in Mathura, and continued the series in Govardhana, during the Vrndavana-Navadvipa parikrama.

This verse was spoken by Sri Caitanya Mahaprabhu Himself:

Actually, every living entity - every human being, animal, bird, bee, and insect - everyone in this world and everyone in the spiritual world - Mother Yasoda, and Nanda Baba - everyone from top to bottom are all Krsna-dasa.

It is written in Sri Caitanya Caritamrta Adi-lila 5.142:

["Lord Krsna alone is the supreme controller, and all others are His servants. They dance as He makes them do so."]

Even Mother Yasoda and Nanda Baba are dasa, servants of Krsna - in vatsalya bhava, the mood of parents. Gargacarya and Sandilya Rsi are also dasa. Kunti, Draupadi, Devaki and Vasudeva - all are the dasa and dasi of Krsna. Yare yaiche nacaya, se taiche kare nrtya means that Krsna causes all of them to dance and behave according to His will.

Srimati Radhika is the sakti of Sri Krsna, and Her prema has a speciality.

["The love of Radhika is My teacher, and I am Her dancing pupil. Her prema makes Me dance various novel dances." (Caitanya-caritamrta Adi-lila 4.124)]

Here it is stated that Radhika's prema makes Sri Krsna dance. This is true, but from the point of view of tattva, established philosophical truth, even Srimati Radhika is dasi. We see that when Krsna disappeared from Rasa-lila, Radhika was weeping:

She cried, "I am Your dasi." This mood of dasi especially manifests at the time of separation.

The conception in this world of being female or male is false. Why? The jiva has emanated from the tatastha region, the marginal line between the spiritual and material energies. He came out from the glance of Karanadakasayi Visnu. Even at that time, even though the jiva was not doing any seva, according to his constitutional nature he was Krsna-dasa. When he comes here and is bound by the material energy, he develops the self-conception, or misconception, that he is the physical body. If he has a male body, he thinks he is male; when he has female body he thinks he is a woman. This false ego is extremely difficult to overcome. How will it go away?

It is said that Sri Caitanya Mahaprabhu had 3 ½ intimate associates - Sri Svarupa Damodara, Sri Raya Ramananda, Sri Sikhi Mahiti and Srimati Madhavi devi. Svarupa Damodara, Raya Ramananda and Sikhi Mahiti were all in male forms but Madhavi was in a female form. We see that Madhavi did not come very close to Sriman Mahaprabhu and associate with Him in the same way that Svarupa Damodara and Raya Ramananda did. Why? Because of this conception of male and female. Madhavi devi had no false ego of being a lady, but because she had a woman's form she externally maintained very respectful dealings with Sri Caitanya Mahaprabhu - from a distance. We should try to follow her example and observe the proper etiquette. Even devotees in a very high stage observe this etiquette.

Do you understand? No? Then you will have to continue to practice, and gradually your identification with this body will disappear. An ordinary person cannot understand this. Those who are deeply and continually hearing can understand and follow this. Go on hearing. Those who are senior can understand, and they should follow Madhavi devi and Svarupa Damodara.

In this world the jiva performs karma (activities) and as a result of these activities samskaras (impressions) develop. Then, on the basis of his samskaras, the jiva develops desires. What kind of desires? "I will get married." Or, "This person is my enemy. I will destroy him." These impressions are carried with us from birth to birth, life after life. Be very careful. Don't see anyone as your enemy." Why? If the mood comes that someone is your enemy, this is your karma phal, the fruit of your previous activities. We should therefore not bear any malice towards anyone or disrespect anyone.

Thus, on the basis of his karma, the living entity develops various impressions and desires, as he moves through the material world in the endless chain of birth and death. This is called the karma-cakra. How can the living entity come out from this karma-cakra? He will have to take shelter of a pure Guru who is very expert in all the sastra, who is tattva-vit (in knowledge of all the established philosophical truths), and rasika (expert in relishing the mellows of serving in the pastimes of Krsna). After he takes shelter of such a person, then "ceto darpana marjanam" gradually develops by his performing sadhana-bhajana. The mirror of his heart slowly becomes cleansed and he begins to have realization of his pure identity. His material identification will go away and he will attain his own spiritual form which is suitable for rendering service at the lotus feet of Sri Krsna. He will attain his sambandha (relationship), rupa (form), ajna (specific instruction), seva, and all other eleven items of perfection. He will go through the panca-dasa (five-stages) towards attaining svarupa-siddhi (mature bhava-bhakti) and vastu-siddhi (prema-bhakti).

One should not prematurely think, "I am a gopa" or "I am a gopi". This stage of realization will arise on its own, naturally, by rendering service and chanting harinama under the guidance of a qualified guru.

What is the gender of the jiva? Actually, every jiva is prakrti, feminine, in relation to Sri Krsna. Even in the spiritual world, the eternal associates of Krsna, who are not in the category of jiva, such as Nanda Baba, Subala and all His friends are feminine from the point of view of tattva, even though they seem to be male by their appearance.

Actually, everyone is feminine. The explanation is that in the living entity there are no aspects of a form by which one can be identified as being male or female. Rather, when one's spiritual form is attained, its svabhava, pure eternal nature, manifests. That nature is seva-lalasa - having the desire to render service. When one has greed to render service in a particular way - like a father or like a friend - then automatically, by his nature, he adopts the appropriate behavior. His form is the embodiment of this service tendency. Actually the living entity has no male or female identity, but he adopts a behavior according to his seva-vrtti, intrinsic tendency to serve.

When the transcendental desires to serve Krsna in one's siddha-svarupa, transcendental form, awaken automatically, the devotee begins to meditate continuously on his eternal mood. By this continuous meditation he attains tadatmya, or oneness with that mood. Srila Raghunatha dasa Gosvami is an example of this. He is chanting harinama and is deeply absorbed in his internal mood. When he fully enters the internal mood, he can no longer remember anything else. He has no idea that he is Raghunatha dasa Gosvami. He completely feels, "I am a maidservant of Srimati Radharani. I am Rati Manjari." How will this come about? This all takes place by the arrangement of Yogamaya, Sri Krsna's lila-sakti (pastime energy).

First a greed will come. Then, when rati or bhava manifests, the devotee will always remember his siddha-deha. The type of sadhana (practice) described here is of a very high level. This sadhana is in the stage wherein the living entity is no longer covered by unwanted desires. The devotee in the stage of pure sadhana has a very strong desire, and according to that desire, he will attain siddhi. It is only a difference between ripe and unripe. Sadhana is the unripe stage and siddhi is the ripe stage.

In the above-mentioned verse spoken by Sri Caitanya Mahaprabhu, the word dasa-dasanudasa has a very deep significance. It indicates that without being under the guidance and following in the footsteps of the gopis of Vraja, no one can become eligible for madhura-seva, the sweet service of Sri Sri Radha and Krsna in Vrndavana.

Srila Raghunatha dasa Gosvami followed this raga-marga. He was worshiping Govardhana-sila, but he did not worship in arcana-marga, the process of following all the rules and regulations prescribed for deity worship. Rather, his service to Govardhana-sila was in raga-marga. If one will follow this method he can attain perfection. One will not even be able to overcome the conception of being female or male simply by following arcana-marga.

The sadhaka's body is present, but he follows the gopis of Vraja by internal mood. One should be very careful to never think, "I am Lalita Sakhi" or "I am Visakha Sakhi or Rupa Manjari or Rati Manjari." One should try to follow them and serve them. In Navadvipa-dhama, in Radha kunda in Vrndavana, and in other places we see that some persons do not follow properly. They dress themselves as gopis, wearing dresses and ornaments like women. This has absolutely no meaning. There is no need to give up the dress of a male person; rather one must give up the conception of being male. We don't find that Srila Rupa Gosvamipada or any of our Gosvamis ever dressed themselves in female apparel. There is no need to display female form or mood externally. If one will do this, his bhakti will be ruined.

The living entity can never become Srimati Radhika, Lalita, Visakha or any of the other specific associates of Sri Sri Radha and Krsna. These associates are not jiva-tattva, but are the direct kaya-vyuha rupa (direct bodily manifestations) of Srimati Radhika Herself. Those sadhakas who follow the actual process of pure sadhana will accept parodha-abhimana at the time of their practice. Parodha-abhimana means the conception that "I am married to someone other than Krsna. I have taken birth in Vraja from the womb of a gopi. I have been given in marriage to a gopa. I am a kisori, a very sweet young girl with no children of my own."

Srila Bhaktivinoda Thakura prayed: "vraja-gopi-bhava, haibe svabhava, ana-bhava na rahibe - when will that day come when this mood of being a gopi will be my exclusive mood and I won't have any other type of feeling?"

This process has been described by Srila Rupa Gosvamipada in his Bhakti-Rasamrta-Sindhu by the verse:

["In the transcendental realm of Vraja [Vraja-dhama] one should serve the Supreme Lord, Sri Krsna, with a feeling similar to that of His associates, and one should place himself under the direct guidance of a particular associate of Krsna and should follow in his footsteps. This method is applicable both in the stage of sadhana (spiritual practices executed while in the stage of bondage) and in the stage of sadhya (God realization), when one is a spiritually perfect soul."]

Here it is clearly stated that the sadhaka-rupa (the external form of the practicing devotee) and the siddha-rupa (the internal form which serves Radha-Krsna in the groves of Sri Vrndavana) are completely different, and the respective practices adopted by these forms are completely different. Seva sadhaka-rupena means that in ones form as a devotee practitioner one should follow the behavior of Srila Rupa Gosvami, Srila Sanatana Gosvami and others by very carefully engaging in sravanam, kirtanam, smaranam (hearing, chanting and remembering) and the other limbs of bhakti. The other aspect of raga-marga sadhana is siddha-rupena catra hi. By siddha-rupa, the internally conceived body which is appropriate for rendering service to Radha and Krsna, one should do bhava-mayi seva, service by transcendental moods.

In this verse the words vraja-lokanusaratah signify that one should follow the residents of Vraja. This means to especially follow the practices that were performed by Srila Rupa and Sanatana Gosvamipada when they were residing here and performing sadhana in Vraja.