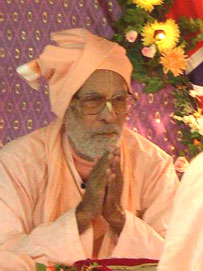 When anyone asks me, "What should we remember or meditate on, when we chant Hare Krsna?" I reply, "Oh, you can meditate that the holy name is Krsna Himself - Yasoda-nandana, ananda-vardhana, nanda-tanaya rasa-kupa. All of Krsna's sweet pastimes are in His name. You can remember this, and chant, "Hare Krsna Hare Krsna Krsna Krsna Hare Hare, Hare Rama Hare Rama Rama Rama Hare Hare."

["I was unwilling to drink the nectar of bhakti-rasa laced with renunciation, but Srila Sanatana Gosvami, being an ocean of mercy who cannot tolerate the sufferings of others, induced me to drink it. Therefore, I take shelter of Srila Sanatana Gosvami as my siksa-guru." (Sri Vilapa-kusumanjali 6, Raghunatha dasa Gosvami)]

["The glory of mahat-sanga is super-astounding. By the influence of that glory, Jana Sarma's life immediately became successful, like that of his Guru, Svarupa. He became a personal friend of Sri Krsna by the association of Svarupa, who was known as Gopa Kumara in this world. That he immediately attained bhagavat-prema demonstrated the immense value of association with a great personality. Just like Svarupa, within an instance that brahmana felt fully gratified." (Brhad-Bhagavatamrta, 2.7.14)]

Svarupa is the associate of Srimati Radhika. He placed his hand on the head of the Mathura brahmana, and that brahmana's life instantly became fully successful. He became a realized soul, he began to weep, his heart melted, tears flowed from his eyes, and he at once went to Goloka Vrndavana and became a cowherd friend of Sri Krsna.

Do not doubt this. The brahmana had not undergone any practice of the principles of bhakti (sadhana). He had not performed sravanam and kirtanam (hearing and chanting the glories of the Lord), but still he received so much mercy from Sri Krsna and Srimati Radhika. Have no doubt in this. It was to reply to any doubt that Srila Sanatana Gosvami wrote this sloka.

[Sripad Damodara Maharaja:] The brahmana was chanting Gopal-mantra. Is that not in the category of sravanam?

[Srila Narayana Maharaja:] Was he engaging in sravanam, kirtanam and other limbs of bhakti?

[Sripad Damodara Maharaja:] He was chanting the Gopal-mantra.

[Srila Narayana Maharaja:] Yes, but he did nothing else.

["Association for sense gratification is certainly the path of bondage. But the same type of association, performed with a saintly person, leads to the path of liberation, even if performed without knowledge." (Srimad-Bhagavatam 2.23.55)]

If someone unknowingly mixes with a worldly person who has many desires for worldly sense gratification, he will be influenced by that person's qualities. Similarly, though not knowing the glorification of sadhu-sanga, if one associates with sadhus, his life will soon change. I have given so many examples of this. For example I explained how Sri Narada Rsi turned the murderer Valmiki into a mahat, a great soul. There are also many histories revealing the mercy of Sri Caitanya Mahaprabhu's associates, so please have no doubt.

Bharata Maharaja had great attraction to a deer. At the time of death he remembered that deer, and thus became a deer. Similarly, if anyone will remember Sri Krsna, His associates and His pastimes, he will attain a transcendental body and the self-conception that, "I am a manjari" It must be. Do not have any doubt in this - because the holy name and sweet pastimes of Lord Krsna have enormous power.

["One should always associate with devotees. Even if they do not teach you directly, their conversations amongst themselves will teach you. Association with wise devotees makes what was empty full. It turns death into immortality. It turns calamity into good fortune." (Vasistha-sastra)]

Always take the association of the mahat-purusa Guru and Vaisnava. Even if Sri Gurudeva is not speaking hari-katha, but is instead speaking about worldly things, you should still sit down there and hear from him. Even his worldly talks will help you. He begins from worldly talks and finishes in krsna-katha. Such gurus are very expert, so don't neglect them. Even if they are not giving any instruction, please sit down there and hear what they are speaking. An atom of hari-katha, emanating from the transcendental body of that maha-purusa, will enter in the hearts of the devotees and non-devotees, and they purify them. So don't neglect this opportunity.

It may be that someone has come here out of curiosity, thinking, "Oh, so many people are here in the audience. What do they do here?" For this purpose they have come - no harm. The atom of hari-katha from the sadhu will forcibly enter into their hearts and make them clean. Bhakti will come and their life will be successful. This takes place very soon, if the person is not a vaisnava-aparadhi or guru-aparadhi. Try to be very careful to avoid vaisnava-aparadha and guru-aparadha.