On the evening of June 6, 2004, at the home of Vinodini and Arun Verma in Houston, Texas, Srila Narayana Maharaja gave a lecture near a speaker phone to 400 devotees in North Carolina. A large festival had been arranged for his weeklong hari-katha in North Carolina, but on the day he was supposed to fly there he was advised to change his plans because of health reasons. Desiring to help the devotees in North Carolina who had gathered from various countries and especially various parts of America to hear from him, and the many who had come to meet him for the first time, Srila Maharaja delivered to them a long-distance lecture. In that lecture he discussed all the stages of devotional service, from initial faith to Love of God.

He also elaborately discussed the verse by Srila Visvanatha Cakravarti Thakura, expressing the opinion of Sri Caitanya Mahaprabhu - that Lord Krsna, the son of Nanda Maharaja and the beloved of Sri Radha and the gopis, is the supreme object of worship. His abode, Sri Vrndavana, is equally worshipable, the unnata-ujjvala paramour love of the gopis is the highest form of worship, and Srimad Bhagavatam is the pure and spotless evidence of the above. Srila Cakravarti Thakura concluded his verse by saying that he is not interested in any opinion outside the opinion of Lord Caitanya, and Srila Maharaja concluded his class by saying that his followers should perform hari-bhajana, nagara-sankirtana, and distribution of his books and the books of Srila Prabhupada Bhaktivedanta Svami Maharaja. That same morning, also by speaker phone, Srila Maharaja initiated about 30 devotees at the North Carolina festival. His secretary e-mailed the new names, and those names were read aloud to the assembled devotees there. 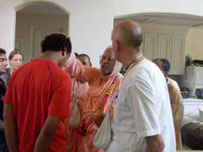 Srila Maharaja's hosts, Vinodini and Aruna Verma, are Sri Sita-Rama bhaktas. Before the class, along with other devotees, they chanted the 5th Canto, Sundara Kanda, of the Ramayana. This chapter describes Hanuman's searching for and finding Sita devi, his conversation with her, his warning Ravana, his burning Lanka, his report to Lord Rama and so on. Out of love, the devotees sang this as a prayer to Sri Ramaji and Hanuman to remove of obstacles in Srila Maharaja's health. Accompanied by many guests, and carried on the "palanquin" of the strong, crossed arms of Sripad Madhava Maharaja and Brajanatha dasa, Srila Maharaja arrived upstairs in their temple room toward the end of their singing. He then directed Krsna dasa to lead the chanting of "Sita Rama Sita Rama Sita Rama Jaya Hanuman" and then the Hare Krsna mantra.