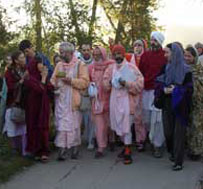 [Ever since Parama-pujyapada Srila Narayana Maharaja began his Western preaching tours in 1996, he has been regularly discussing the five kinds of pure devotees. His visit to Russia this year was no exception. (Soon after returning from Russia, Srila Maharaja had a 5-day program in Noida (near Delhi), wherein over 3,000 people attended each night, and this was the topic of his classes there as well.)]

For the last two days we have been discussing uttama-bhakti, and we also explained that there are some lower classes of bhakti. Now, with examples, I want to touch on all the stages of bhakti. Bhakti has five stages or divisions. There are actually millions of divisions of devotees, but among them five are prominent – the jnani-bhakta, suddha-bhakta, premi-bhakta, premapara-bhakta and prematura-bhakta.

You may know the history of Dhruva Maharaja. Dhruva Maharaja had darsana of Lord Narayana in only six months – by chanting the mantra “Om namo bhagavate vasudevaya”, given by Sri Narada Rsi. Still, his bhakti is not called pure uttama-bhakti. He performed very severe austerities to please Lord Narayana. He rejected food, water and even air. In six months he entered samadhi and saw Lord Narayana, who was carrying the wheel, conch, lotus and club. Yet, his bhakti was not pure, because he had worldly desires (anyabilasa). In his natural position he wanted to have vast wealth and a kingdom greater than that of his father, who was king of the world.

Lord Krsna was so merciful that Dhruva Maharaja received not only his father’s kingdom, but the kingdom of the whole universe for 36,000 years. Still, he lamented after meeting with Lord Narayana. He considered, “I was searching for some jewels or gold, and by luck I received a cintamani (desire stone) – but I threw it out.” He lamented that he had not told the Lord, “I want your bhakti” – not vraja-bhakti, or bhakti of Narayana, or any kind of bhakti.

Nowadays, many have an idea that they have attained the stage of raganuga-bhakti, but if any worldly desire is there, that is not even pure vaidhi-bhakti. It is very hard to actually say, “I am a raganuga-vaisnava.” We can, of course, very easily say this with thousands of mouths, but we should examine our hearts to see if in our natural position even a touch of worldly desire is present there.

Dhruva Maharaja’s bhakti is rejected as being in the category of pure devotion. It may be after that he had the association of Sri Narada Gosvami and taken the darsana of Narayana, so it may be that his desire vanished, but there is no proof of this – it is not written anywhere. He still had the desire to take his mother with him to Vaikuntha. His is not an uttama-bhakti. His was karma-misra bhakti with anyabilasa (worldly desire). Therefore, we don’t want it.

The first category of devotees in the five kinds of pure devotion is Prahlada Maharaja, who is a jnani-bhakta. Sanaka, Sananda, Sanatana and Sanat-kumara, in their first stage, were jnani-bhaktas, and Grandfather Bhisma was also a jnani-bhakta. It is not easy to be like them. They were bhaktas, not voidists or impersonalists (nirvisesa-vadis). They didn’t follow Sankaracaryas’s theory. They never said, “I am Brahma – I am that Supreme Impersonal Being.” They knew that Lord Krsna is Parabrahma, the Supreme Personality of Godhead. There is a strong conception (jnana) of the opulence of Krsna in their hearts, so they are jnani-bhaktas. The four Kumaras were even speakers of asta-kaliya-lila. Bhisma Pitama is a very exalted devotee and is one of the 12 mahajanas; but he is not a suddha-bhakta, in the sense that he cannot render direct personal service.

Prahlada Maharaja meditated on Lord Krsna. Bhismadeva can meditate and the four Kumaras can also meditate. But they consider that their Lord is never hungry, He has no thirst, and He never gets tired – so there is no need for giving him a massage, for example – as Hanuman massages Lord Rama. They never render personal service.

Pure bhakti is “anukulyena krsnanu-silanam”. There must be some service. A pure devotee will serve his Lord. But jnani-bhaktas have nothing to do, because they always think, “He is our savior, protector, and worshipable Lord.”

Now we will explain how Prahlada Maharaja is a jnani-bhakta. He had no worldly desires at all. Lord Nrsimhadeva appeared to him and said, “You may ask any boon from me.”

Prahlada Maharaja replied, “I am not a business person. If I have any worldly desire, please take it away.” Lord Nrsimhadeva insisted, “You must choose a boon.” Prahlada Maharaja wanted his father to be liberated, and he also requested, “I want all non-devotees in this world to be free from the endless pain of birth and death and be liberated; and in turn, I will suffer for them.” Lord Nrsimhadeva wept and thought, “What a glorious devotee!”

Prahlada Maharaja is a pure devotee. His jnana does not mean nirvsesa-jnana – the misconception that the ultimate truth is impersonal. Rather, his jnana is aisvarya-jnana. We see here that there is not so much mamata (sense of “my-ness”) towards the Lord and no service, because of knowledge of the Lord’s opulence. You can read the pastimes of Lord Nrsimhadeva and Prahlada Maharaja in Srimad-bhagavatam if you want to know more.

Superior to Ambarisa Maharaja is Hanuman. Hanuman is a premi-bhakta. He is liberated and is serving Rama, and he has so much mamata for Him. He discovered Sita in Lanka and he carried Rama on his shoulders. Ambarisa Maharaja could not do so. Ambarisa Maharaja was thinking of serving – in other words he was serving with his internally conceived spiritual form within; but externally he was in the body of a sadhaka (practitioner), which could serve the deity but not the Lord in His pastimes. On the other hand, Hanuman was actually serving Rama with his body.

Hanuman serves Rama in all respects. Some knowledge of Rama’s opulence is present in his heart, but very rarely. Hanuman has aisvarya-jnana, but not always. He considered that his Lord was sometimes hungry, so he would bring so many fruits from the forest. When Ravana stole Sita, Hanuman jumped over the ocean and found her. He also burnt Lanka and returned to Rama. He thought, “I am qualified to kill Ravana, but I desire that he be killed by Lord Rama.” He wanted to take Sita on his back and bring her to Rama, but she denied to do so and said, “Rama should come, and finish this entire dynasty of demons.”

The Pandavas are still more superior. They are called prema-para bhaktas. Hanuman can carry Rama and Laksmana on his shoulders, but he cannot sit on their shoulders. He cannot give his food remnants to Rama, thinking, “Oh, this is very sweet. Let me give some to Rama.” He fears to do so, because knowledge of Rama’s opulence is somewhat present. Opulence is somewhat of an obstacle, so although he is so high a devotee, there is some obstruction in his flow of devotion.

Lord Rama himself told Hanuman, “I am Krsna. Obey me and also help Arjuna. Always sit on top of his chariot and continually help him to conquer Duryodhana.” So not only did Krsna become the servant of the Pandavas, but Hanuman did as well.

[On the following night in Volgograd, Srila Narayana Maharaja told his audience about the devotion of Sri Uddhava, as an example of the prematura-bhakta, and finally he told about the love in separation of the gopis and especially Srimati Radharani.]