Guru Inspires in the Heart 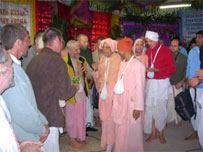 [Question:] Srila Prabhupada is my diksa-guru, but I don't feel close to him. When Guru is not before our eyes, how can we have a relationship with him?

[Srila Narayana Gosvami Maharaja:] Guru is like Krsna. Krsna inspired the heart of Brahma and said, "I am the embodiment of all tattva-jnana, tattva-vijnana, and all love and affection. Only this form of mine was present before the creation, only that form exists now, and later, after the destruction of everything material, only I will exist.

Guru is like that. If you pray to him, new understandings will come in your heart by inspiration. Don't think he is mortal. He is like Krsna and, like Krsna, his mercy is causeless. So pray, and he will inspire you. Sometimes he comes as siksa-guru, and in the form of siksa-guru he inspires you by his words and teachings.

[Srila Narayana Gosvami Maharaja:] Yes, we have the same mission, the same aim and the same goal, though sometimes we use a different choice of words. He believed in me, more than he believed in anyone else, and he told me that our relationship is transcendental.* [See Endnote 1 and 2] He therefore ordered me to give him samadhi with my own hands, and to help his Western disciples and followers. He told me, "Because they are like monkeys, I could not train them fully; so you please continue their training."

[Question (showing an oil painting):] This is a painting begun by Nilambari for your book, Gita-govinda.

[Srila Narayana Gosvami Maharaja:] Radha's sakhi is telling Krsna, "Now you are coming. Where were you?" When Krsna tries to explain, the sakhi weeps and says, "I don't believe you." Krsna is now in a dilemma about what to say and what to answer. He is asking, "Where is Srimati Radhika? I am in anxiety to meet Her."

[Question]: Recently, when I showed you the three new posters that were printed (Venu-gita, Manini-Radha and Seva-Kunja) you commented,

[Srila Narayana Gosvami Maharaja:] Give them to those who like them, and not to those who don't like them. Sraddha mula vikara. Sraddha is the most important aspect. Sraddha gives value to something. Without sraddha, faith, the thing has no value.

[Question:] I have no inspiration to do sadhana. My environment is not inspiring. What should I do?

[Srila Narayana Gosvami Maharaja:] I am trying to give inspiration to all. I think that only two, three or four are not humble here. Mostly everyone here wants to be of one opinion. They are thinking, "I want that we can all work together and be of one opinion." If juniors give respect to superiors and superiors give love and affection to juniors, then everything will be alright.

[*Endnote 1 – from Srila Prabhupada’s letter to Srila Narayana Gosvami Maharaja. (Return address c/o Gopal Agarwal from Butler, Penn.) Sept. 28, 1966: “I received your letter dated September 20, 1966, on time. Our relationship is certainly based on spontaneous love. That is why there is no chance of us forgetting one another. By the mercy of guru and Gauranga, may everything be auspicious for you. This is my constant prayer. From the first time I saw you I have been your constant well-wisher. At his first sight of me, Srila Prabhupada also saw me with such love. It was in my very first darshan of Srila Prabhupada that I learned how to love. It is his boundless mercy that he has engaged an unworthy person like me in fulfilling some of his desires. It is his causeless mercy to engage me in preaching the message of Sri Rupa and Sri Raghunatha.”]

[*Endnote 2 – “Then he told me, ‘I want you to help take care of my disciples. I want them to be good and qualified devotees. If they come to you, please care for them.” Many of Srila Swami Maharaja’s disciples were nearby so he softly whispered in Bengali, “When I went to the West, I caught so many monkeys in my net. Really, they are very expert in quarrelling amongst themselves. They are still very young and untrained. So I request you that after my departure you will help them in every respect.” Considering the implications of this order from my siksa-guru, I hesitated. Then he grasped both of my hands in his own, looked deeply into my eyes and asked me to promise to help. Therefore I agreed, saying, ‘I promise that according to my ability and my bhaktisiddhanta-tattva (understanding of the conclusive statements of bhakti) I will always be ready to help them as you request.’”
(from Srila Narayana Gosvami Maharaja’s book, “My Siksa-guru and Priya-bandhu”)]