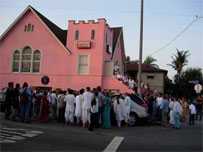 I like this matha (temple) – this big matha – where there is accommodation for so many devotees. I want this matha to be run well, so that many devotees can come and be happy here. They will take prasadam and receive all facilities here, just as in our temples in Mathura and other places. I appeal to all for help, so that this will be a good center.

I came only to meet you here, to request you to always remember:

[“Unto those great souls who have implicit faith in both the Lord and the spiritual master, all the imports of Vedic knowledge are automatically revealed.” (Svetasvatara Upanisad 6.23)]

The meaning of this verse is practically the same as the following one:

[“This Supreme Self cannot be reached by argumentation, or by applying one’s independent brain power, or by studying many scriptures. Rather, he alone can achieve the Supreme Lord whom the Lord chooses to favor. To that person the Lord reveals His own true, personal form.” (Katha Upanisad 1.2.23)]

What is the meaning?

[After Padmanabha Maharaja speaks, Srila Narayana Maharaja resumes:] What is the meaning of ‘yatha’?

[Srila Narayana Maharaja:] What is the hidden meaning? It means “as you do saranagati (surrender) and anyabhilasita sunyam (pure devotion devoid of any other desire) to ‘deve,’ Sri Krsna or Radha-Krsna – you should be surrendered in the same way toward guru.” You should be totally loyal to guru. Even if guru is madhyama-kanistha, madhyama-madhyama or madhyama-uttama (the highest stage of madhyama-adhikari), you should be loyal.*[See endnote 1]

It has been told in Gita:

[“Whatever a man may sacrifice to other gods, O son of Kunti, is really meant for Me alone, but it is offered without true understanding.” (Bhagavad-Gita 9.23)]

This verse has a very good and deep meaning. Lord Sri Krsna says, “For those who worship demigods and others – but with faith – I fulfill their desire.”

Similarly, if guru is madhyama-adhikari, but sincere, chanting and remembering sincerely – what to speak of a guru who is madhyama-uttama – then, if he cannot give the fruit of the disciple’s devotion to him, that disciple can pray to Krsna. In fact there is no need of praying; Krsna will fulfill his desire. Krsna fulfills the desires of the devotees of the demigods, and in the same way He will help you attain your desired result through your Gurudeva.

Moreover, if Guru is uttama-adhikari, then he can directly say to you, “Krsna-bhakti bhavatu – May you have pure devotion to Sri Krsna at once.” Therefore the word ‘yatha’ in the above-mentioned verse beginning with yasya deve para bhaktir means “as much as.” As much devotion as I have for Sri Krsna, I have for Gurudeva – beginning from sraddha, nistha, ruci, asakti, and all other stages such as dasya, sakhya, vatsalya and madhurya. We cannot directly have a madhurya relationship with Krsna, but indirectly, under guidance. I can become a maidservant of Srimati Radhika.

Someone may say, “It was tasteful to Krsna that Yasodamaiya chastised Him, so it will be tasteful to Guru if we chastise him.” Should we also chastise Guru? Certainly not. Do not do so. We are here in the sadhaka (practitioner) stage, and Mother Yasoda is in the siddha stage, the perfect stage in which one already has developed his spiritual form. The siddha stage cannot be applied in the sadhaka-stage. We should always have regard for Gurudeva with dasya-bhava only. Don’t apply vatsalya-bhava (the mood of a parent) to Gurudeva. However, we can apply lokika-sadabanduvat (bosom friendship).

The mood of respect and honor at all times is applicable in the disciple-guru relationship. Even in the true sadhaka stage, the disciple must always be in a mood of awe and reverence.

And, regarding the second sloka:

[“This Supreme Self cannot be reached by argumentation, or by applying one’s independent brain power, or by studying many scriptures. Rather, he alone can achieve the Supreme Lord whom the Lord chooses to favor. To that person the Lord reveals His own true, personal form.” (Mundaka Upanisad 3.2.4 / Katha Upanisad 1.2.23)]

[Sripad Madhava Maharaja:] This means he is thinking, “I am an intellectual giant. I can do this, I can do that.”

[Srila Narayana Maharaja:] No. He may actually be an intellectual; he is not just thinking he is. He may be very intelligent. ‘Na bahuna srutena.’ He may have read, and thus remembers, all the srutis (scriptures).

‘Yam evaisa’ means “indeed, for such a person”. If you indeed give up all false ego, Lord Krsna will see that, and Guru will see that. They will think, “Oh, he is loyal and he has no pride. He really wants pure bhakti”. Krsna will see this and immediately bestow His mercy. This will not come by one’s own intelligence, nor will it come by ones hearing sruti, nor by any other means. The same is true with the first verse I discussed. ‘Tasyaite kathita hy arthah’. All Vedic knowledge will be revealed in the heart of one who is devoted to the Lord and the bona fide Guru.

I want that all my devotees should be like that. They should not delay. In unity they should preach this mission everywhere, giving up all false ego and all other considerations. Senior devotees should have love for juniors and juniors should have honor for seniors; and together you should preach under the guidance of asraya vigraha. Asraya vigraha is Radhika, and then also Guru. You should be united and preach everywhere. This will save you.

[Question:] You were saying that if anyone has a madhyama guru, but that guru is sincere and the disciple is serving him, Krsna can fulfill his desires through that Guru. But I have one question. Suppose someone has a kanistha guru, or if he even has some guru who is…

[Srila Narayana Maharaja:] Guru should be qualified. He may not be an uttama-adhikari guru like Narada, like Sukadeva Gosvami, like Svarupa Damodara, Raya Ramananda, Rupa Gosvami and others like them. He may be a madhyama-madhyama or madhyama-uttama. He is not siddha, but if he is sincere from his heart and he is chanting and remembering in the true sense, Krsna will still give mercy through him. I gave the example of the demigods.

[Question:] Someone may say then what is the need of an uttama-adhikari, if all of this can be accomplished by a madhyama-adhikari?

[Srila Narayana Maharaja:] Oh, the uttama-adhikari guru will hold up the palm of his hands and bless the disciple: “May you now be blessed with krsna-prema.”

[Question:] But one may say, “Why should we be concerned that an uttama-adhikari is necessary, if madhyama-adhikari… ”

[Srila Narayana Maharaja:] Uttama-adhikari is rare in this world. Rare in this world. You cannot really associate with uttama-adhikari. You cannot recognize whether one is an ordinary person or a mad person or whatever. At the time of Sri Sukadeva Gosvami, only exalted devotees recognized him. Otherwise, ordinary persons and ordinary devotees could not recognize him.

*Endnote 1 – [In a similar way, a guru may be madhyama-uttama, a madhyama-adhikari in the final stage; he may not yet be siddha (a perfect, self-realised soul) like Narada Muni, Srila Sukadeva Gosvami, and others. In that case, if he is a sincere devotee and if a disciple follows him with deep faith, who will give the fruit of the disciple’s worship? A madhyama-adhikari cannot give it. If one is an uttama-adhikari like Narada Rsi or Sri Sukadeva Gosvami or Srila Rupa Gosvami, he can give it at once, but a madhyama-adhikari cannot. The madhyama-adhikari guru will tell hari-katha and engage his disciples in such a way that they will advance in bhakti. What will be the result? If one has very deep faith in that guru, Krsna himself will surely give the fruit, and that fruit will be transcendental. Krsna will give that disciple the fruit of the association and shelter of an uttama-adhikari guru. To a devotee initiated by a madhyama-adhikari guru and who really desires to attain the highest goal, Krsna gives the association and mercy of an uttama guru who can bless the disciple with that goal. Try to understand this. It is not very easy to understand, but try. Do not have any doubt about this. (Guru-Devatatma, p 46)]

[Uttama-adhikari gurus are not easily available; they are very rare in this world. Moreover, even if they are available, most people will not be able to recognize them. For example, Sri Sukadeva Gosvami was naked, and Sri Vamsidasa Babaji put fish bones and other abominable things outside his bhajana-sthali. You would not be able to know that Srila Gaura Kisora dasa Babaji Maharaja is an uttama maha-bhagavata. If a madhyama-uttama guru who is under the guidance of an uttama-adhikari guru will tell you, or an uttama-adhikari playing the role of a devotee in the stage of madhyama-adhikari will tell you, then you will be able to know. We should be very, very careful about this. Do not have any doubt in that kind of guru. If one is madhyama-uttama, he can help so much by his direction. The advanced madhyama-adhikari will very soon come to the stage of rati (bhava), like Bharata Maharaja and Ambarisa Maharaja. If a person has doubts in him, do not associate with that person. His association should be given up as one gives up stool after passing it. (Guru-Devatatma, p 46-47)]